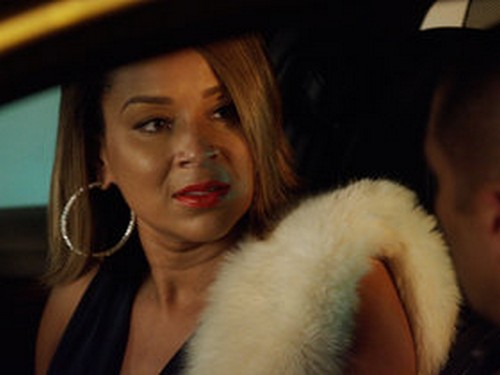 Tonight on VH1 their reality show SINGLE LADIES airs with a new episode called, “A Cut Above”  On tonight’s episode different business approaches plague Raquel and Terrence. Elsewhere, April sets out to impress Felicia and ends up connecting with a new man.  Did you watch last week’s episode?  We did and we recapped it right here for you.

On last week’s episode as Raquel continued to look for investors for Indulgence, she considered a partnership with Terrence in his new business venture. April had her first head-to-head competition with David over a potential new client, Keke. Keisha considered telling Malcolm about the secret photo of Naomi and Malcolm Sr. she discovered. A run-in with Presley threatened Omar’s new relationship.

On tonight’s show Raquel and Terrence’s new partnership experiences growing pains, as they discover they have very different approaches to business. April, hoping to score points with Felicia, introduces her to everyone at Indulgence, and bonds with a new guy over their respective evil bosses. Malcolm and Keisha continue to deal with Sean as he looks for holes in their armor.

Raquel refuses to let any sexual tension interfere with her partnership with Terence. No matter what Omar may think or hope. Raquel knows she needs to keep her head firmly on her shoulders. That’s why when she checked in with him at what was supposed to be a business lunch; she asked what he brought to their partnership so far. They’re preparing to launch the “Cut” but she does more reconnaissance than he has. Terrence was left to find a manufacturer and he thought one his homeboys would make a great choice. Raquel suggested otherwise.

She knew the perfect man for it too. He’s world renown and would be perfect for the job. Terrence agreed but he didn’t know the strings attached. She told him for their meeting he would have to come properly attired in a suit and he has to show some Japanese courtesy. Terrence agrees albeit reluctantly.

Later however he appears to suddenly become more invested at the most inopportune time. He arrived at the meeting willing to do what Raquel asked but abruptly changed his mind. He began to question Mr. Chang’s business method and went as far to get ghetto with the older man. Raquel thought his behavior ended there until a few days afterwards when she hears that he’s been basically harassing their manufacturer even after he bully the man into providing them a sample.

Raquel was busy trying to re-launch Indulgence as the place to shop when she heard about Chang. April had hooked her up with Felicia. The deal was if Indulgence managed to grab her interest then she would send her clients their way. Part of this plan required a successful party at the boutique. Raquel was working on it all day when she heard from Terrence that Chang wasn’t returning their calls.

She stormed over to his place where she apparently she interrupted his downtime with his boys. She was angry at him for costing them their deal when he explained to her that he had to show his real colors. Terrence said Chang had to know who he was working with and he doesn’t appreciate Raquel coming to his place to put him on blast. They left things there and went to back to their own business.

Raquel still has a party to throw. April desperately wants to impress her boss at the same time she wants to help Raquel. Felicia has been on her lately and David has been sniffing around her heels for anything she’s willing to give him. Not that she wants to go there again. April doesn’t want to be attracted to David and the new guy she recently met might be able to help end that. Ben is really sweet and had even tried to help her with Felicia. She found out Felicia was a prince fan and he helped her get one Prince’s jackets to give to Felicia for her birthday.

It didn’t work though. It seems Felicia actually knows Prince and the two are close friends.

April wasn’t the first person to take a misstep and she wasn’t the last. Keisha had promised Malcolm that she wasn’t going to go near Sean or Naomi but she hadn’t planned on Sean following her.  Earlier he was upset with Malcolm for firing Naomi and he knew the best way to get back at him would be through Keisha. He tracked her down at a poker game and did his best to taunt with their past relationship. It worked in riling her up. She found him waiting in his car and invited herself in. Keisha thought she’d tell him to lay off seeing as his case wasn’t going to win but she accidentally brought up the photo. It wasn’t till she saw he nothing about it that she suddenly made her escape.

When she got him, she confronted Malcolm. She wanted to know if ever did hand over the photo to his lawyers when he admitted he burned it. Keisha is disappointed in him but not as much as he was upset with her. He got angry after she said she told Sean about the photo. Keisha was able to calm him down by saying Sean didn’t even know what she was talking about but she doesn’t know that he recorded their conversation by mistake.

Malcolm was able to look past her slip of the tongue. For now…

Raquel had no reason to worry about Terrence. Chang got back to them and reassured them that he would love to work with them. He found Terrence refreshing to how other clients normally treat him. As for Terrence, he’s happy that he was right. Although to be fair, Raquel did apologize for blaming everything on him. The two were back on good terms when they kissed each other. Terrence wasn’t unnerved by it. As matter of fact he wanted to see where it goes when Raquel put a stop to it. She said they were business partners and they shouldn’t make it messy.

Terrence is willing to respect that. Though he’ll still like her!

Felicia never made it to Raquel’s party. She and Omar might have become fast friends but that wasn’t going to stop her from accepting an invite from Russell Simmons. And yet David manages to make it to the party. He ran into April and Ben. David tried to down play his jealous by making fun of Ben but that’s hard to do when Ben’s side business, selling celebrity memorabilia, made half of million last year. April found herself a good one.