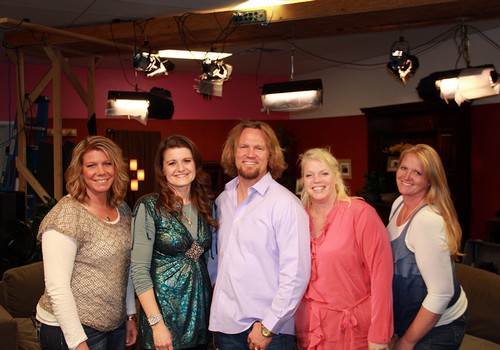 TLC’s reality show SISTER WIVES returns tonight with a new episode.  Tonight’s episode is called, “Polygamist Flash Mob,” and on tonight’s show The Browns throw a party to celebrate Mariah and Aspyn’s graduation from high school, but Meri has a hard time thinking about Mariah leaving for college.  Did you watch last week’s episode?  We did and we have the recap to get you caught up, right here.

On last week’s episode on a Mormon mission, Kody met friend, Brett. But as Kody turned toward Mormon Fundamentalism, Brett turned away. Now Kody and Brett were ready to rekindle their bro-mance. Meri’s paniced about her future empty nest grows as Mariah’s graduation approaches.

On tonight’s show it’s Mariah and Aspyn’s graduation day and Meri has a complete meltdown. Later, the Browns throw a party for the two girls, featuring what may be the very first “polygamist flash mob”. There’s even a fortune teller who sees a fifth wife in Kody’s future.

Meri and Kody are meeting with an advisor to discuss Mariah’s college expenses. The advisor is pushing Mariah to take out student loans, but Kody is very against it. Kody doesn’t want her to be buried in loan debt before she even graduates and has a job. Kody is hesitant but he finally agrees that co-signing a student loan may be a good idea.

It’s graduation day! Mariah and Aspyn are getting ready for their big day. Aspyn is ecstatic to be leaving home. Christine is a little nervous though, Aspyn takes care of everything for her. Mariah isn’t as happy about graduating as Aspyn, she is nervous and sad about leaving her Mom. Meri is going to be devastated when Mariah leaves and she is stuck home alone in their big empty house.

The families are heading to the stadium to watch the graduation. Meri is freaking and crying before the ceremony starts out because from the seat she is in, she can’t see Mariah when she walks down the aisle. Robyn convinces Kody to move all 23 members of their family to the opposite end of the stadium so Meri can see better. Mariah and Aspyn finally get their diplomas.

The next day Meri and Kody take Mariah aside to have a conversation with her about their “baby situation.” Mariah really wants them to have another kid, but Meri is having fertility issues. They have decided that they don’t want to “rush nature” and they are going to wait and “see what happens.” Mariah isn’t thrilled, she wanted her Mom to pursue IVF.

Despite the fact that Mariah and Aspyn have banned their parents from dancing at their graduation party. They have decided to do an adult flash-mob, and they all head to Christine’s house to practice. Mariah walks in while they are practicing their dance, and they have to cut their practice short.

It is the day of the girls’ graduation party, and all of the Brown family is at Christine’s house decorating for the party and preparing the food. All of the Brown’s friends and neighbors arrive at 4:00 PM to celebrate.

Jenelle distracts everyone at the party, by giving Mariah and Aspyn a surprise gift, which is just a decoy. While the girls are opening their fake gift, Robyn, Kody, Christine, and Meri sneak into the room decked out in their flash-mob costumes. The flash-mob actually turned out to be a huge success, and all of the kids joined in with them.

Kody sits down to get his fortune read next, and the fortune teller reveals that he is going to have another wife in the near future. And, she states that he already has his eyes set on someone.

After the fortune readings they head downstairs and give Mariah and Aspyn their graduation presents. Meri gets emotional again when Mariah opens her presents from all of her siblings.

Mariah and Aspyn’s graduation party was a success, and they are ready to start packing up for college.