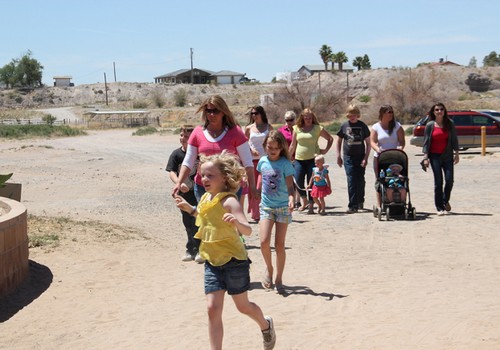 TLC’s reality show SISTER WIVES returns tonight with a new episode.  Tonight’s episode is called, “While the Wives are Away…,” and on tonight’s show the wives take a road trip to San Francisco, where they work on their relationships by shopping for dresses for their commitment celebration. Meanwhile, Kody stays at home with all 17 kids.  Did you watch last week’s episode?  We did and we have the recap to get you caught up, right here.

On last week’s episode it was Mariah and Aspyn’s graduation day and Meri had a complete meltdown. Later, the Browns threw a party for the two girls, featuring what may be the very first “polygamist flash mob”. There’s even a fortune teller who saw a fifth wife in Kody’s future.

On tonight’s show it’s a Brown family first when the wives take a road trip to San Francisco without Kody! The wives decide to work on their relationships by going dress shopping for their commitment celebration. And with the women gone, Kody is home alone with 17 kids.

Tonight’s episode of Sister Wives opens with Janelle working out with her fitness trainer. She has signed up to do a 5K. Robyn has designed t-shirts for her and her Janelle and her team to wear for the 5K. Robyn screwed up and ordered an XL for Janelle. She used to wear a size 4X in women’s shirts. They don’t have time to order another shirt for her, but Janelle is shocked that it actually fits her, she has lost that much weight. The day of the 5K comes, and Janelle is beginning to have cold feet. She is embarrassed to run in public in front of other people, she is afraid people will make fun of her. After some encouragement from her kids, she finishes the race.

Three days later the Sister Wives are packing to leave for San Francisco. They are going on a four day trip together, and plan to look at dresses for their upcoming commitment ceremony. Kody and Aspyn are in charge of watching all of the kids while the Sister Wives are out of town. This is the longest that they have ever left all of the kids overnight with Kody. The women are nervous about spending so much quality time together, without Kody.

The wives are off. Kody decides that the first night they are gone he will cook chicken, steak and burgers on the grill, and make enough to feed the kids left-overs for the next four days. While he is grilling his daughter Ysabel stubs her toe. While he is doctoring her up, he forgets about the food on the grill and burns it. He is definitely in over his head.

Meanhwile in San Francisco Kody’s wives are checking out dress shops. The first shop they go to is a store called Elizabeth Charles. Unfortunately, the only one of them that can fit into any of the dresses in the store is Robyn.

Back at home Kody is taking all of the kids over to their neighbor’s house to swim in their pool. While they are swimming one of Kody’s older daughters ask him if anyone has asked for his permission to court them. Kody shoots down the conversation, he thinks his daughters are too young to be courted, they are all 17 and 18. He wants them to get an education first before they worry about being married.

In San Francisco the wives are still shopping for commitment dresses. The second day of their trip they head to a plus-size dress shop. Janelle, Christina, and Meri will be trying on dresses, but the shop doesn’t have any that will fit Robyn.

Back in Las Vegas Kody’s house is mayhem. Kody decides to call his wives and see how they are doing. He chooses to call Christina’s cell phone. While she tries to talk to him, Meri, Janelle, and Robyn all stare at her and make her feel uncomfortable. The wives then proceed to pass the phone around so that they can all speak to him.

The wives are getting discouraged dress shopping, so they decide to go to a fabric warehouse and pick out material to have their own custom dresses made.

Kody is taking all of his children bowling back in Las Vegas. Kody is a horrible bowler, but his kids are picking up quickly. Aspyn got three strikes in a row.

In Las Vegas, one of the kids are sick. Trudy is acting very lethargic, Kody thinks she has a touch of the flu. Christina is nervous, and she can’t wait to get back home and see how her baby is. Aspyn and Mariah can’t wait for their Moms to come home, Kody is driving them nuts. Finally Christine, Janelle, Robyn, and Meri return to Las Vegas, and are greeted by their kids and Kody. Kody is relieved that his Wives are home, and he can turn the kids back over to them.