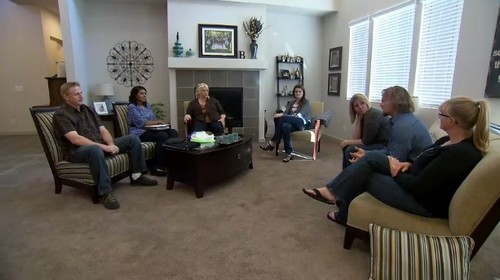 TLC’s reality show SISTER WIVES returns tonight with a new episode.  Tonight’s episode is called, “Sister Wives Tell All 2,” and on tonight’s show Tamron Hall interviews Kody, Meri, Christine, Janelle and Robyn, who discuss the challenges of parenthood, living in Las Vegas and premarital sex. Later, six of the Brown teens talk about college, dating and their views of plural marriage.  Did you watch tonight’s first episode?  We did and we have the recap to get you caught up, right here.

On tonight’s first episode after months of planning there was just 48 hours to go; the dresses were not ready, the lights were not strung, and 200+ guests were on their way. A surprise organized by the teenagers caps a unique event; a celebration of four marriages in one giant family.

On tonight’s episode in this latest installment of Sister Wives Tell All, the Brown family sits down with NBC’s Tamron Hall to dish about everything that happened on camera and behind the scenes on the latest season of of TLC’s hit show.

The Brown family is reliving their moments over the last season. The moderator Tamron Hall wants to get the family to open up about what happened behind the scenes. After all the cameras couldn’t film everything and Tamron feels there’s more than meets the eye. Take the commitment ceremony. Everyone knows Meri was apprehensive about the ceremony and that never got the chance to be fully explained on the show.

Meri felt that way for a number of reasons. She didn’t think they needed the ceremony at first because their family didn’t need to be justified. She only changed her mind on that after she came to see the ceremony as a re-commitment to their way of life. That’s what she in honesty was having a problem with. Since her daughter left for college, Meri has been struggling. She understands its empty nest syndrome but she’s figuring how to deal with it on her own terms.

Kody feels that the other children could be a comfort to her and Meri finds herself keep explaining to him and Robyn that she needs to grieve for Mariah’s lost before she starts trying to substitute; not that she can. It’s why Meri wants to find herself over the next upcoming months. She has to figure out who she is now without Mariah being her first priority.

Robyn and Kody on the other hand don’t get it. All Robyn hears in particular is that the sister wives helped her raise Mariah and now in return Meri is kind of bailing on the rest of them as she begins to find herself. When that’s not what Mariah wants. She just needs to learn how to re-adjust which isn’t always easy for her. That doesn’t mean she won’t step in when her family needs her.

As they learned when on their own became seriously ill, depending on their sister wives was a necessity and they count themselves lucky enough to even have that option. When Christine was stuck watching over one of her children go through dialysis then she knew her other children were getting taken over. That’s how their family is supposed to be. Like Kody pointed out earlier, he doesn’t want four wives and four families. He wants one family to be strong enough to see out the hard times together.

Tamron had moved on to asking about what happened at the graduation ceremony. Meri had broken down when she couldn’t see the Mariah properly. But when she broke down in a near tantrum like she did, Kody had gotten fed up. It felt like the same old thing with Meri and he warned Robyn to let Meri drag her into things.

Christine was able to see that it the idea to Mariah leaving that made Meri act the way she did even though Kody couldn’t understand. What was most telling though was what he said to Robyn. They never meant to get that part captured by the cameras because it leaves them awkwardly explaining things. He felt Meri was causing drama and it left him in the position of not knowing what to do. They had in-laws and the kids seated so it wasn’t as if they could have just gotten up to move.

While Robyn has become the family’s peacemaker, the wives let most of the final say got to Kody but that isn’t always easy as it sounds. Take for instance the college fund. Most of Mariah’s tuition is being paid by Meri’s personal account and yet the same can’t be said about Aspen. Aspen’s tuition is getting paid by the family fund. Meri explains that seeing as she has just the one she wouldn’t have felt comfortable getting money from the family fund. Meri wanted to be fair.

All the wives want to be fair to each other. Yes, they’re married to same man but that doesn’t mean they want to hear the other wives be affectionate. No one wants to be given the opportunity to make comparisons. Kody for one knows that best of all. He knows it and then foolishly mass texts them “I love you”. He doesn’t get that they want individual message just for them. He also doesn’t comprehend how awkward it is for them to reply. They have to make sure they get off of mass text or else the other wives will see what they’ve written.

Tamron then moves on to questioning the older kids. The kids have grown up over the last season. His older daughter had actually come out to ask their father if any guys had asked for them. In the polygamous culture, a guy that wants to court a girl generally gets permission from her father and although their father was discomfited he told them that no; no one has asked yet. And deep down the girls wanted to be asked. That doesn’t mean they would have said yes but they wanted the chance to say “no”.

In the meantime none of Kody’s sons have asked anyone’s permission. They feel that tradition is outdated and have chosen to go around that rule.

The teens have come a long way since she last spoke to them. For one, Mariah has decided to focus more on college at the moment than looking for the perfect partner while Mykelti found herself a boyfriend. That comes as a surprise. Mariah explains that she still wants sister wives of her own but chose to enjoy being 18 right now. As for Mykelti, her boyfriend does know about her family and finds it interesting. She feels because it doesn’t really understand but she’s happy.

Mariah had chosen to go to school back in Utah to be around polygamous families and it’s ironic now that she wants time outside of that community. Lately as many of their friends and family have gotten persecuted for the polygamous lifestyle it has helped her take the topic in a more serious tone not to be taken lightly. Mariah ended up proud at how her family was able to manage everything.

The adults themselves are struggling with what’s been going on back home. They want to know their family is safe and that’s hard to do with the government coming down hard on them in one second and then taking them into consideration in the next. And in a time when the government’s reaction to their lifestyle appear unreliable then they know they still got each other.