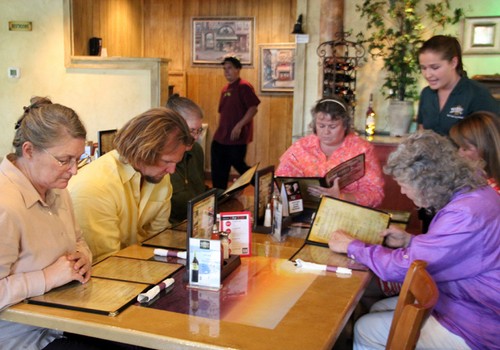 TLC’s reality show SISTER WIVES returns tonight with a new episode.  Tonight’s episode is called, “The Commitment Celebration,” and on tonight’s show the commitment celebration is in two days, but the dresses aren’t ready and the decorating isn’t finished. Meanwhile, the Brown teens plan a touching surprise for their parents..  Did you watch last week’s episode?  We did and we have the recap to get you caught up, right here.

On last week’s episode the Browns were preparing for their long-awaited Commitment Celebration. Tensions and tempers flared after a disastrous dress rehearsal with the entire family, leaving Kody and his wives wondering if all their hard work and planning would pay off.

On tonight’s episode after months of planning there’s just 48 hours to go; the dresses are not ready, the lights are not strung, and 200+ guests are on their way. A surprise organized by the teenagers caps a unique event; a celebration of four marriages in one giant family.

We will be covering Sister Wives season premiere tonight at 8 PM EST so don’t forget to come back to this site for our full and detailed recap.  Make sure to refresh often to get the most recent details.  While you wait for the recap, let us know how excited you are about the new season of Sister Wives.

The celebration is a day away and that leaves the family running around to finish everything with enough time to get themselves prepared. It leaves Meri having to deal with her family just to get the food for the party cooked on time. And it leaves Kody struggling literally against Mother Nature. He’s only now putting up the lights in a geometric pattern (that he recently came up with) when surprise the wind keeps giving him problems. He probably would have cancelled the whole idea if it had already been up and he saw that it kept falling under certain weather conditions.

Also Meri has to shop for a dress. The design student, Sam, couldn’t finish hers in time and that leaves Meri having to do some last minute shopping. That’s why she’s taking her best friends since moving to Las Vegas to go dress shopping with her. Andrea is actually one of the few women she knows that is up to the task. The other sister wives know that Meri can be a perfectionist and that means she usually takes hours finding what she wants. Yet this time she was in and out after about 90 minutes because she found the perfect dress.

Now if only Robyn can get that same magic. Sam had to bring in her mother to help finish up the dresses because it getting hard to finish them all. So Robyn doesn’t know what she’ll be wearing to the commitment ceremony.

Kody is still at it with the lights, when the family has to do a rehearsal. The lights were giving his frustration but nothing could raise his blood pressure like getting the kids to do a rehearsal. Thankfully after a few minutes of utter chaos, the kids managed to pull through. The younger generation appeared to have remembered what they did to their dad the last time and so were on their best behavior.

The dress situation finally blew up. Even though Sam and her mother stayed up all night they were only able to finish two dresses. Sadly, Robyn’s dress is a mess. Kody had some misgivings when he saw it close to competition but he had held his tongue because he knew nothing good can come from saying what he really thought. But maybe he should have. If he had said she should buy her dress then she would have had the time to go frantic shopping like Meri did. Instead she had to use a dress in her closet because even Sam warned her that the dress didn’t look good.

She was left with no other choice on the day of while Janelle is still waiting for her dress to be finished. It’s time for pictures and all the mothers need to do a family shot with their kids and Kody. Robyn rushed to put on her make-up and Janelle managed to change into her dress minutes before it was her kids’ turn. And just when everything is getting on track it turns out that Kody was close to cracking.

He’s been taking photos with all the wives and kids for the last two hours and just as he got close to finishing with one large family group shot, the younger kids began to act up. That proves to be a breaking point for him. He begins to wig out and his wives start to get nervous watching him. Even Meri told him to take a breather because Kody was too close to losing it.

He appeared on edge all the way to reading the family’s mission statement in front of their friends and family. It was reading the family’s commitment to each other that calmed him. For a second there he had forgotten what the day was for but saying the statement out loud allowed him to remember the positives of the day.

The adults then gave each other and the kids the symbol they chose for their family. It was wrist bands and necklaces with the insignia of a tree. But they hadn’t counted on the kids doing something special as well. As a surprise, the kids all said what they were thankful for. Like how their parents pushed them to do better or how they were taught respect. It was sweet and did what the parents had been trying to do all day – it got the kids to appreciate what the commitment ceremony means to their family.

That’s all the adults wanted. For their family to appreciate how much they mean to each other.