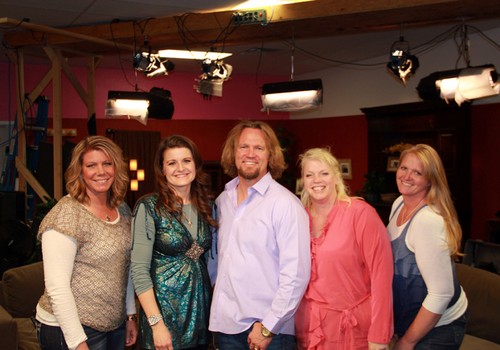 TLC’s reality show SISTER WIVES returns tonight with a new episode.  Tonight’s episode is called, “Celebration Countdown,” and on tonight’s show a dress rehearsal goes awry when the Browns are getting ready for their commitment celebration, and Kody and his wives wonder if all their hard work and planning will pay off.  Did you watch last week’s episode?  We did and we have the recap to get you caught up, right here.

On last week’s episode with the commitment celebration just a month and a half away, the Browns needed to kick the plans into high gear. They met with a party planner, but their efforts were interrupted by a sudden family tragedy– the second in two months.

On tonight’s episode the Browns are preparing for their long-awaited Commitment Celebration. Tensions and tempers flare after a disastrous dress rehearsal with the entire family, leaving Kody and his wives wondering if all their hard work and planning will pay off.

The family is back from Wyoming and continuing with their recommitment party for the family. They’ve come a long way with their plans but there are still several things that were pushed to the back. Like the most important thing; The Family’s Mission Statement isn’t finished yet. On top of all of that the wives also want to wear custom dresses to the ceremony and had left the fittings till the very last minute.

Which isn’t easy with all of them. The seamstress is a daughter of one of their friends and she’s doing the dresses as a favor to them. But despite it being a favor, Meri is usually difficult self. She happens to be very picky and has given the Fashion student quite a long list of must-haves. Meri wants to look edgy and original while Janelle wants to show off her slimmer figure. She’s been working on it and wants to show off all of her efforts.

Later as they finally get to the mission statement, Janelle begins to question whether or not they’ll need more copies. Kody hasn’t mentioned a fifth wife so far but Robyn wasn’t really on the cards either. They were all together with their counselor when Janelle asked Kody about it. Robyn for one didn’t like Janelle bringing it up but she felt it had to be asked. As for Kody, he doesn’t think he’ll ever go for another wife. He honestly believes their family is complete as it is.

A little while afterwards, the entire Brown family were rehearing for the commitment ceremony when the rehearsal lead to several issues. Luckily most of the problems boil down to this – the kids don’t take anything to do with the ceremony seriously. They know how much it means to their parents but they don’t necessarily care about what it all means. It’s not like their friend hold commitment celebrations and they don’t get why they need one. At first the kids weren’t standing still enough. They were trying to play around and it took the mothers several minutes to get them under control. And then the adults were getting hassled about the family mission statement.

Kody thought it would best if he threw it out there that the kids don’t all have to sign. He didn’t discuss this with his wives beforehand and as it turns out they all disagree with him. They don’t believe in forcing their children but they were never going to lay it out like a choice to begin with. Not when they’ve all worked so hard just to come up with the mission statement.

The breaking point, though, mostly landed with the adults. It was technically their fault the rehearsal was giving that much trouble. They got frustrated with the rehearsal and that’s because their kids couldn’t stop acting out. Although how were they to do anything else seeing as it was hot outside and all they’re doing is standing around while their parents tried to make up their mind on what goes where. The adults hadn’t full thought everything out when they chose to do a dry run and after having enough of the kids’ attitudes Kody flew off at the mouth. He told the kids if they didn’t start behaving then he was going to kick them out of the family.

He didn’t mean it and his wives knew that. Some of the kids didn’t. They were a little nervous of their dad once he said that.

The dresses are shaping out to be more trouble than they’re worth. The days are counting down to the ceremony and this one student is rushing to find the right fit for all four women. They each want to feel beautiful but even by this stage they felt they had put the dresses off for too long. Not that all the dresses are looking unfinished. Janelle’s dress is shaping out to be exactly what she wanted and on the other hand both Robyn and Meri are stuck with dresses that are in no way what they envisioned.

For Meri, it’s a material issue. Sam, the helpful student, refused to give up on Meri’s dress for the longest. By time she got around to admitting defeat with the fabric it was a couple of days before the celebration. So she told Meri that they would have to start over and see where that leads.

Christine’s dress just needed to be taken a couple of inches and that was easy to do. And Robyn’s dress wasn’t looking like what she took a picture of in the store. Maybe such a large project was too ambitious for one person.