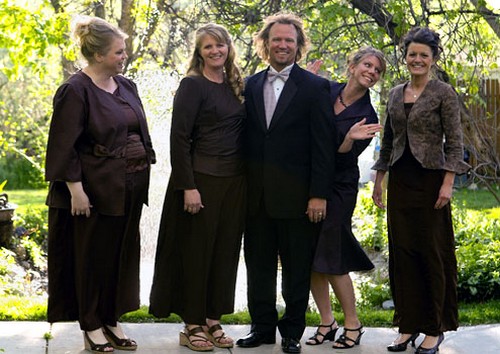 TLC’s reality show SISTER WIVES returns tonight with a new episode.  Tonight’s episode is called, “Browns in Crisis,” and on tonight’s show Another family tragedy, the second in two months, interrupts the Browns’ efforts to plan a party for their commitment celebration.  Did you watch last week’s episode?  We did and we have the recap to get you caught up, right here.

On last week’s episode the Browns got a scare when Truely fell ill but was told she just had the flu. While preparing for Mariah’s going away party, Truely’s health worsened and Christine learned that she had a deteriorating condition and needed to be hospitalized immediately.

On tonight’s episode with the commitment celebration just a month and a half away, the Browns need to kick the plans into high gear. They meet with a party planner, but their efforts are interrupted by a sudden family tragedy– the second in two months.

The family is planning a commitment celebration. In true Browns’ fashion the family is throwing a party. They were able to finish their family mission statement and want to celebrate that but the only big spectacles they generally attend are all weddings. None of the wives want their party to look like a wedding.

In planning for their party, they hired the usual business associates. Most of them are not Mormons and yet these people are able to work along the Brown family respectively. One of the hired guys is a Christian man. He does believe polygamy is a sin and regardless for that he truly thinks the family will go to heaven. Meri likes that they have different kind of people around.

All talks of the party gets put on the backburner. Kody’s family has gone through one tragedy after the other and it was time he took his own family for a visit. His brother, Curtis died in accident four months ago. Then his father, Winn, had a heart attack and died and few months afterwards. The family wanted to visit and couldn’t because Trulie became seriously ill. Now that the little girl is just getting off of her medication the family have decided to make the trip.

Kody needed to see his mother. The older woman had gone through a double loss and having her grandchildren would help to cheer her up. Growing up, Kody’s family had gone through their own troubles. His brother didn’t convert to their sect and chose to be a born again Christian. And his father was very patriarchal. Something Janelle learned firsthand every time they got into an argument.

Kody also had a hard time with his father but he does and will miss. He always felt like his dad was tough on him and he only learned to accept his father did love him later on as he got older. His father other wife, Janelle’s mother, is having a hard time dealing with Winn’s death as well. They had gotten married later on in life and even Kody’s mother doesn’t believe Cheryl has had long enough time with Winn.

While everyone is back home in Wyoming, Kody feels like now is the time to say everything they should have said back when they used to live there. Kody thinks Meri should finally tell her former employers that they’re polygamists. When as it turns out the older couple already knew. They caught on in the early days and didn’t want to address it if Meri didn’t. Still, they knew and Meri sort of knew they knew. Long ago when Meri and her family used to have dinner at their house, they would send over leftovers and cookies for the rest of the kids.

Living in Wyoming was hard for the family. Particularly for Christine. She couldn’t acknowledge Kody was her husband and so it made it feel like she was single when she wasn’t. Not the greatest feeling in the world to have during her first pregnancy. That’s why she loves their lives now. Their family doesn’t have to hide anymore.

Meri though managed to remind them of the good memories in Wyoming. She took to the old house they used to live in and the kids got to see their old hand prints they had made in the cement. It was one of the rare times they were able to acknowledge that they were a family and it made everyone glad to see it was still there.

Once the family enjoyed their trek down memory lane, they joined together to do an informal tribute to Curtis. He was Kody’s baby brother and he wanted to say goodbye to him in a special way. So the family wrapped bandanas around the fencing post in his honor seeing as Curtis was always the family’s wild child cowboy.

Later on, Kody checked in with his mother. He felt her sadness and knew she was questioning her faith. It was bound harder for her to lose her son over her husband. No parent expects to outlive their child and Kody needed to make sure she was ok. As it turns out she’s not but she does admit to getting better. His mom and Cheryl have grown closer since Winn’s death. They go to church together and are able to comfort each other during their loss.

And that’s what Kody wants for his wives. He’s always said if his family falls apart after he’s gone then it wasn’t a family. He needs them to be strong enough that they’ll stick together no matter what like what Cheryl and his own mother are doing.

It’s why the mission statement is important to them. It can be the glue!