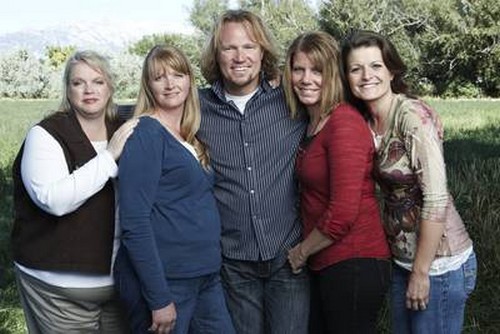 TLC’s reality show SISTER WIVES premieres with its fifth season.  Tonight’s episode is called, “Meri Drops a Bomb,” and on tonight’s show in the Season 5 premiere, the Browns meet with a potential investor for their jewelry line; Christine’s daughter Mykelti brings a boyfriend home; and Meri’s revelation could ruin her relationship with another sister wife.

Last season, we left off with the Brown family hosting a Commitment Celebration to celebrate the family being back together again, where they shared a family mission statement declaring the ideals they are working towards. Unfortunately, the harmony instilled by the reception is already gone as the Browns face one of the most chaotic weeks since the panicked move from Utah.

This season, tensions are high as the family tries to lock in investors for their fledgling jewelry business. With 4 mortgages and 3 kids already in college (with more following fast), pressure to make money is at an all-time high

On tonight’s episode The Browns face a chaotic week. They have a meeting with a potential investor for their jewelry line. Christine’s daughter Mykelti brings a boyfriend home. Lastly, Meri drops a bombshell that threatens her close relationship with one sister wife.

Tonight’s episode of Sister Wives kicks off with Cody cooking dinner on the grill for Meri and Dayton’s birthday.  After dinner, Cody and his wives sit down to discuss their business venture, an online jewelry boutique.  They are going to meet with an advisor to help them put together a pitch for possible investors.

After the wives leave, Cody heads upstairs with Robyn to tuck the kids in to bed.  Cody jokes that he feels uncomfortable snuggling with Dayton before bed now that he is fourteen years old.  Dayton has been diagnosed with Asperger’s, but Cody thinks he is just “quirky.”

The next day, Cody heads to Meri’s house to celebrate her birthday with her.  She is a huge fan of Keith Urban, so she straightens Cody’s hair like his before they head out.  At dinner Meri announces to Cody that she is going to go back to college.  She was afraid that Cody would disapprove, but is relieved when he insists he is excited for her.  After dinner they decide to finish their night off by dancing.

Cody heads to Kristine’s house for the night the next day.  Cody and Kristine’s daughter Mykelti has her boyfriend John over for dinner, and Kristine wants Cody to have a talk with him.  They have been dating for only a month and Kristine thinks that they have been spending way too much time together.  Cody gives them a speech about the “danger zones,” and says that kissing and holding hands leads to broken hearts.  He goes on to explain that when you kiss someone, their hormones go in to your mouth, and tricks you and thinks you are in love.  Then he proceeds to discuss “sewing your wild oats.”

After bickering with Meri over remodeling the home they own in Utah, and what the contractors are doing Cody heads out with Janelle to celebrate their wedding anniversary.  The kids are mortified when he leaves the house with his hair in a ponytail because that’s how Janelle likes it.  They head out to dinner together, and Cody is happy to say that they are as happy twenty years later as they were during their honeymoon.

The next day Robyn breaks the news to Cody that she can’t have another baby until the workload from their company, “My Sister Wives’ Closet” is lightened.  She informs him that they need investors and some hired help.  Cody is stunned, and she is annoyed that he won’t have a conversation with her about expanding their family or their business.

Later Cody and his wives head to their meeting with their friend Stan, who owns a consulting firm and dabbles in venture capitals.  Cody pitches their ideas to Stan, but reveals that they don’t have any official business plans or evaluations.  Janelle is embarrassed at how unprepared they are, and feels like “little kids.”  Stan reveals that what they have right now is child’s play, and his business partners would chem them up and spit them out.

Despite their depressing business meeting, Cody and all of his wives and all of his children get together to celebrate his birthday with cake and presents.  After the festivities Meri breaks the news to Robyn that she is going to start college in the Fall, Robyn is furious because she is backing out of their Boutique business, and doubling Robyn’s workload.  Meri argues that she is still going to be Robyn’s partner, but Robyn doesn’t want to hear it.