BY Amanda Austin on July 2, 2014 | Comments: one comment
Related : Reality TV, Recap, So You Think You Can Dance, Television 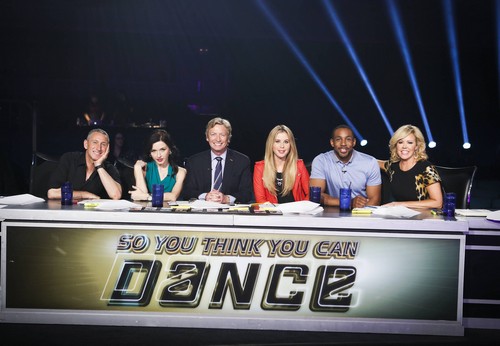 Tonight on FOX, SO YOU THINK YOU CAN DANCE continues with a new episode. On tonight’s episode the Top 20 dancers perform and there will be no eliminations.

On the last episode the search continued last week for America’s Favorite Dancer as SYTYCD headed to Pasadena for callbacks. All five audition cities competed in the grueling callbacks for a coveted spot in the Top 20.  Did you see who leapt into the judges’ hearts and who fell flat? If you missed it, we recapped it all right here for you.

On tonight’s episode, the Top 20 finalists – 10 guys and 10 girls – will perform live for the first time and for America’s vote with partners in their own styles, so that the nation can get to know more about them and their talents.

Tonight’s episode of So You Think you Can Dance features the Top 20 performers of Season 11 performing for America’s votes for the first time this seasons. SYTYCD judges take their chairs, along with guest judge and singer Jason Derulo. Tonight, the dancers will be dividing into teams of two and dancing their hearts out, the two dancers who receive the least amount of America’s votes will be eliminated next week on SYTYCD.

Brooklyn and Serge will be dancing a cha-cha to “Hell Yeah” by Midnight Red.

Judges Comments: Mary – “Extra extra read all about it! The hot dancing starts right now! Thanks you guys for getting me all fired up. Brooklyn you are so beautiful up there, but I could tell your nerves were getting the best of you. Serge, wow, you almost made it last year and you came back better than ever. You look magnificent out there!” Jason – “That’s an amazing way to start, it got very steamy up there for sure. I was thinking to myself, wow, this would be really cool for my show.” Nigel – “You know I just got from being with a group of artists in Virginia and a group of kids probably just six or seven lifted the whole room and that’s what you just did. Serge, you’ve worked really hard over the years ot get in the Top 20 and it is really paying off for you. Fabulous, good job!”

Emily and Casey will be performing a contemporary dance to “All of Me” by John Legend.

Judge Comments: Jason – “Oh my God, I’m so excited right now. I didn’t want that to end honestly. I was watching, I was like ‘yo this is an amazing episode what’s going to happen next?’ That was amazing honestly, you guys really brought that story alive. You touched everybody in this room.” Nigel – “As Jason said, sometimes it’s not about the technique, but then you put it together with the emotion it is absolutely superb, which you did. What I particularly loved about it, is as John Legend is going in to the falsetto Casey stretched all the way out. Congratulations tonight.” Mary – “It was just a beautiful love story between the two of you, I loved every single second of it. Emily, your extensions just go on for days. And, Casey what a partner you are! I can’t wait to watch you this season, grow and grow.”

Valerie and Zack will be tap dancing to “Sing” by Ed Sheeran.

Judges Comments: Nigel – “Wow, wow, wow, wow. You know, I’m going to be really rude, I was getting so frustrated with the audience because they were cheering and I couldn’t hear the taps. I keep on about tap, and I think there are only about three of you in the Final 20 that can tap. You are both magnificent, not just in your style and technique.” Mary – “holy smokes you guys were on fire up there. I loved the fact that as you went up and down the steps it looked like you were almost off balance but you weren’t you were in complete control up there. Valerie, you are just a star up there, you take me back to another era!” Jason – “I’m a tapper as well, I come from a tap background, and that was unbelievable. Tapping on the steps is so hard, because the taps are a little slippery, my hate goes off to you guys that was unbelievable.”

Bridget and Stanley will be performing a contemporary dance to “Doesn’t Mean Good-bye” by Jon McLaughlin.

Judges Comments: Mary – “Wow! Wow! They told the story amazingly, it was so believable, it was completely form the heart. I fell for it hook-line-and-sinker. Stanley, can we talk, I mean wow. Those legs, they’re honestly, the height you get in your leaps is unmatched by anyone in this competition. Bridget you are so adorable and you move with a completely life-like quality.” Jason – “It just looked effortless. It looked like it came easy to you guys. As an audience member, we want to feel like we are a part of the story, and we did. The elevation for both of you is pretty crazy.” Nigel – “IT was tremendous. Your classic technique was fantastic and when you did the pirouette, it was absolutely purely done. Whoever gets you guys next week is going to be very very happy.”

Jacque and Jourdan will be performing a ballet dance to “Pas De Deux” (from Swan Lake).

Judges Comments: Jason – “Wow, just so every one knows I come from a point background. That was beautiful, I loved to watch it.” Nigel – “I can’t wait to see what else you do, good luck. Jacquie, you surprised me tonight. Jourdan, I’d like to see more elevation from you.” Mary – The strength that these ladies needed, it takes unbelievable strength to do what you two were doing. You liked like sisters up there who had been dancing together for years. It was incredible to watch. I can’t wait to see what you guys do next.

Malene and Marcquet will be dancing a Brazilian samba to “Morning Drums.”

Judges Comments: Nigel – “I am so pleased, this is Dancing With The Stars. I’ve gotta say, there was something about your performance Malene where you were just waiting to begin. That energy, where it comes out was fantastic. And, Marcquet you are a force to be reckoned with. You two are going to have very exciting lives. Tremendous!” Mary – “Amazing, wow. Somebody was cooking something in the over today, and I say it was hot samba rolls. There was so much volume up there. And Malene you had me from your first walk down. I’m so happy that you are here on this stage. I just can’t stop watching you dance. Jason – “I could tell you guys were definitely in your element, what you guys did up there is you showed us how it is done. It’s not an easy dance at all.”

Carly and Rudy will be performing a contemporary dance to “Take It Easy” by Jetta.

Judges Comments: Mary – “Oh my goodness, that passion just poured out all over that stage. It was really really beautiful. Sometimes Rudy you have to watch yourself like when you let her down from that lift. But, I will say something Rudy, you have heart. Carly, you are absolutely stunning and you have worked so hard to get here. It was just kind of happening all at once, and it was like a light came on. It was really special.” Jason – “So, when the music got instense, it felt like you guys got ten times more intense. It was like you guys could do anything on that stage. There will be foure people going home next week and you won’t be one of those four.” Nigel – “It tough, because we know we’re going to lose people and we don’t want to lose any of you. This is by far the best Top 20 we have ever had on this show, as a group. And, Rudy you are just so damn likable.”

Emilio and Teddy will be performing a hip-hop dance to “Nightshift” by the Commodores.

Judges Comments: Jason – “Well, just so everyone knows I come from a hip-hop background. That was super dope, that was incredible man. What you did with that, that was serious. There are just so many different elements of hip-hop dancing. I loved watching you guys.” Nigel – “What I would say is both of you are soloists and yet you found a way to connect tonight. Emilio your tricks are fantastic, they really are terrific. Teddy I know you tap dance as well, and I look forward to seeing that from you too.” Mary – “It was so sharp, so clean, and so easy to read. It was really just mesmerizing. And yeah, Emilio your tricks are out of this world. I see both of you being in the next Step Up movie together!”