So You Think You Can Dance Expert Recap: Season 11 Episode 12 “Top 8 Perform + Elimination”

BY Cate Meighan on August 14, 2014 | Comments: one comment
Related : Reality TV, Recap, So You Think You Can Dance, Television 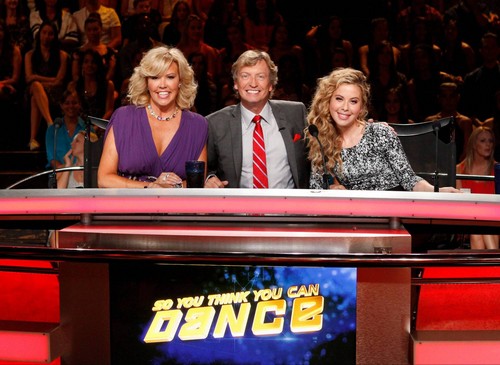 Tonight on FOX, SO YOU THINK YOU CAN DANCE continues with a new episode. On tonight’s episode the Top 8 dancers perform with All-Stars from previous seasons: Stephen “tWitch” Boss; Ryan Di Lello; Makenzie Dustman; Comfort Fedoke; Jaimie Goodwin; Allison Holker; Nick Lazzarini; and Will Wingfield. Each performance will be choreographed to a Michael Jackson song, including “A Place With No Name,” from the 2014 album “Xscape.” Jenna Dewan Tatum is the guest judge. Also: an appearance by the dance crew Control Freakz.

On tonight’s show this season’s top eight finalists perform with new SO YOU THINK YOU CAN DANCE all-star partners, before learning which dancers will be ending their journeys. Tune in to see if your favorites make the cut and who is sent home, as well as a performance by one of the featured dance crews.

It’s a special night on SYTYCD, the top eight will be performing with the all-stars to music by Michael Jackson. Finally, an opening that I love. The top eight dancers opened the show by performing to Michael Jackson’s A Place With No Name, clad in silver with their hair sprayed purple. It was futuristic and featured really cool choreography by Travis Payne who actually choreographed for Michael. Tonight’s regular judges, Nigel Lythgoe and Mary Murphy are joined by Jenna Dewan Tatum who starred in the first Step Up movie before settling in as a popular actress and Channing Tatum’s wife.

Ricky is performing a Travis Wall contemporary piece this week with his new all-star partner, Jamie.  They are dancing to Smile and Ricky is cast as the positive light or the person that always picks you up when you’re down. He is just stunning every single week and Jenna can’t believe how mind blowing he is each week She also felt the connection between Jamie and Ricky. Mary tells him that everything he does is effortless and at an upper level that we rarely see. Nigel says that Ricky dances in a Zen-like state and he is transcending the choreography.

Valerie and All-Star Ryan are doing a Jean-Marc samba to Wanna Be Startin Something. Mary points out the obvious- Valerie completely attacked it and did an amazing job It’s easy to forget that she’s a tapper by definition. Nigel thinks that she was brilliant and Jenna loves the joy that she dances with. Jenna loved that she went from being happy to straight up sexy.

Casey is paired up with all-star Comfort for a FarSide and Phoenix theatrical routine to Xscape. The routine is called 8 Legged Love and is about a spider caught in a web. This routine was crazy and Nigel loves Casey’s momentum. Jenna also loves his stage presence and the way that it takes over the stage. He was in the moment and somehow not over powered by Comfort. Mary loved that he got stronger and found his groove as it went on rather than just tiring out.

Tanisha is paired up with All-Star Nick, the winner of season one and they are performing a Stacy Tookie contemporary piece to she’s Out Of My Life. Tanisha is cast as the love of Nick’s life and he is reflecting back onto when things were good. Tanisha is really a wild card here. She is on par with Ricky- just solid every week. Jenna loved the fluidity and said she would nit pick and say she could have used a bit more emotion. Mary says that all of the choreographers love Tanisha because they can do anything with her. Nigel says that she is one of the strongest dancers that he has ever seen. He wants more vulnerability out of her.

Rudy is paired with All-Star Allison  for a Ray Leiper piece about obsession. Allison character is obsessed with Rudy and determined to own him. The music is Dirty Diana and this was by far THE dance of the night. I can say that Allison is my all-time fav SYTYCD dancer but damn, even I forgot just how great she is This was sharp and they were so volatile and totally on. Standing ovation from everyone- no shock there. Mary has to calm down in order to critique and when she does she says it was spectacular. Nigel thinks this performance pushed him to another stage. Jenna points out how hard it is for anyone to hold their own with Allison and Rudy did it phenomenally.

Zack is up next and he’s dancing with Makenzie for a Broadway routine to The Way You Make Me Feel. They keep saying that Zack is like a sponge and it’s obvious here. While Zack seems to conquer most styles Broadway really suits him well. Nigel points out that Broadway is similar to tap  and he loves that people are realizing how good he really is.  Jenna thinks he has the control that Broadway requires and she also thinks that Zack won Mackenzie over. Mary loves his spirit of attack every week. He’s already a pro.

Jacque is dancing with all-star Twitch and tackling a Dave Scott hip hop routine to Slave To the Rhythm. The ballerina disappeared and Jacque showed she could hit this routine as hard as she needed to. The isolations were tough and Jenna loved to see her pull them off. Mary thought she did a great job and it was cool to see her do something so different. Nigel thinks that Jacque and Twitch complement each other and make a great dance couple.

Jessica is performing a Mandy Moore routine with All-Star Will. It’s an earth spiritual piece set to Earth Song and they get a standing ovation from the judges. Mary says that for performers to be in the finale the stars have to be in alignment and Jessica has all of the things necessary to get there. Nigel thinks she is magnificent and Jenna agrees. Everyone foresees Jessica in the finale.

I love that we get to see dance crews regularly performing now on SYTYCD and tonight Control Freakz performs a really cool number to a waltz from the Amelie soundtrack. I know that doesn’t make sense but it was filled with isolation’s and the end result was really cool.

Unfortunately two dancers are leaving tonight. Of the ladies either Tanisha or Jacque is going to be cut and Rudy or Casey is also going home. Rudy and Tanisha are leaving tonight Tune in next week for the top 6 dancers on SYTYCD.