Sofia Vergara ‘Objectified’ at 2014 Emmy Awards: Tells Katie Couric to Shut Up and Lighten Up (PHOTOS) 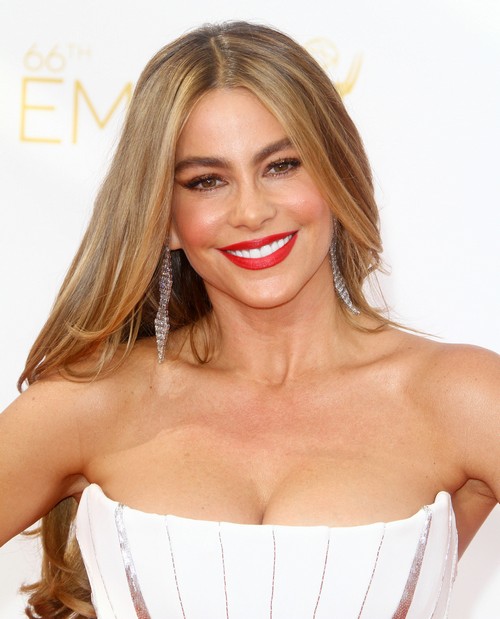 The 66th Annual Primetime Emmy Awards were last night and there were several awkward scripted bits that occurred throughout the evening. One bit in particular involving Sofia Vergara has caused some controversy and may have even started a feud between the actress and Katie Couric.

Sofia introduced the president of the Academy of Television Arts & Sciences, Bruce Rosenblum, to the stage. His speech about the importance of offering meaningful programming to the US and around the world began innocently. He then asked the Columbian bombshell to stand on a revolving platform. “That seems a bit unnecessary,” Sofia said, but she agreed for the sake of American television.

As Sofia spun around and striking several different poses for about a minute and a half, Bruce concluded his speech by saying that we must never forget the goal of televisions is “always giving the viewers something compelling to watch.”

Twitter quickly erupted with rage after the “sexist” and “objectifying” moment.

“Wow. Could that Sofia Vergara bit been any more gratuitously sexist? #Emmys,” one viewer tweeted.

“Modern Family wins every award it’s ever been nominated for but apparently that’s not enough for Sofia Vergara to be treated as more than a prop,” another fan added.

“Sophia Vergara on a lazy Susan. Just why, #Emmys?,” another tweet read.

Katie Couric was also watching the Emmys and felt the scripted bit was sexist. “I love @sofiaVergara but did anyone find that schtick somewhat offensive.” She tweeted.

Sofia has heard about the controversy and spoke with reporters directly after the event. “I think it’s absolutely the opposite. It means someone can be hot and also be funny and make fun of herself and enjoy and work and make money, so I absolutely think it’s ridiculous.”

She also seems to know who’s to blame for all of the uproar. “And somebody who started this, and I know who she was, has no sense of humor and should lighten up a little bit!” Is that a jab at Katie?

I also felt the moment was awkward and sexist. However, if Sofia doesn’t feel that way, then I will not add to any of the other voiced sentiments. How did you feel about Sofia’s “lazy Susan” moment? Was she overtly objectified or was it just another Hollywood award show sketch? Join the conversation a leave a comment.

Editor’s Note: Sofia Vergara ‘Objectified’ at the 2014 Emmy Awards – lol! Has anyone noticed the parts she plays? Sofia Vergara epitomizes the term, ‘sex object.’ And that is what Hollywood and the entertainment industry is all about. Sofia is just really really good at it – so hate the game not the player. Besides the whole skit was spoof – are people so PC-sensitive these days that they can’t handle a harmless joke?