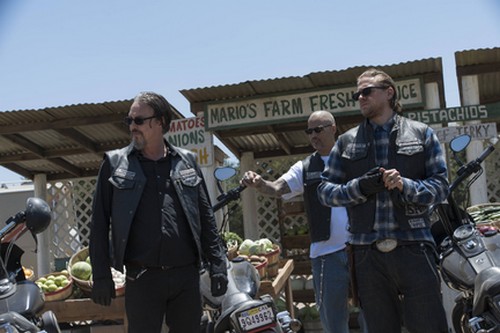 Tonight on FX Kurt Sutter‘s Sons Of Anarchy starring Charlie Hunnam returns with an all new Tuesday September 16, Season 7 episode 2 called, “Toil and Till.”  On tonight’s episode SAMCRO solicits help from another charter to finish a job.

On last week’s season premiere sadly the final SoA ride started and the start was a violent one.  Jax got thrown into jail because the police thought he killed Tara but was soon released when they found evidence that he did not kill her.  Jemma manufactured a story and told Jax that a Chinese gang member killed Tara.  Jax believe her and killed the man violently.  I could have skipped that scene.  More happened!  If you missed the episode, we have a full and detailed recap, right here for you.

On tonight’s episode the MC solicits help from another Charter to get a messy job done. Written by Charles Murray & Kurt Sutter; directed by Billy Gierhart.

Tonight’s episode looks like it is going to be great and you won’t want to miss it, so be sure to tune in for our live coverage of FX’s Sons Of Anarchy season 7 episode 2 at 10 PM EST! While you wait for our recap hit the comments and let us know how excited you are about the return of Sons of Anarchy. In the meantime, enjoy a sneak peek preview of tonight’s episode below.

Jax slowly wakes up in his bed. He rolls over to see the empty space beside him, covered with a bit of morning sunshine. He gets up and walks into the kitchen. He lights up a cigarette.

Juice also lights up a cigarette. In his house, we see Wayne tied up in the bathtub.

Meanwhile, Gemma also smokes a cigarette. She takes a drink of coffee. Nero is also there. He says he’s glad to be here. Gemma admits that life would’ve been a whole lot simpler if he’d just refrained from buying that drink for her. He agrees that it would be simpler — a lot simpler. But not as fun, he admits.

Wendy wakes up and gets mad at Gemma for smoking in the house around the kids. Wendy shows Gemma a letter for a school that she thinks Abel should start attending — because he should get a good education. Pre-Kindergarten. Wendy tells Gemma that she should go check it out, but Gemma tells Wendy to go instead and that she’ll just “write the check.” Wendy says she doesn’t have a car to get there. Nero says he’s headed up that way and would be happy to give her a lift.

Tig and Ratboy have a stakeout and wait to see whether or not some people are about to make a drop.

Juice goes into the bathroom with a huge knife. He cuts Wayne’s wrist ties and says he’s free to go. But Wayne doesn’t leave immediately. Instead, he sits down at the kitchen table with him to have a chat. Wayne asks if he’s running from the club and if he’s got a plan to get out of Charming. Juice says he’s not sure — about anything — and that he doesn’t have a plant. Wayne says, “You want my help?”

Tig and Ratboy see some action. Men are loading up a truck. Tig gives Jax a call and relays the news.

Jax meets with August and tells him about what’s going down. August asks about Tara. Any word yet on what happened? August warns Jax about revenge and the dangers it can bring. Patience, in business and on the streets, is important to practice.

A guy in a haz-mat rolls in an oil drum. He opens a fortune cookie box to reveal a severed head.

Wayne goes to talk to Jarry and says that he’s reconsidered helping out around there. She’s surprisingly willing to have him on board and offers him a consulting position, which she thinks will be particularly beneficial given the fact that he knows a lot about Charming’s “bloody history.” She hands him a stack of paperwork. Before he leaves, he says that he wants to see all she’s got regarding Tara’s murder. She questions his motives; however, he says that he merely wants to “get caught up to speed.” Jarry says that there’s one SOA member who has not yet been questioned: Ortega AKA Juice. Wayne covers for him and says he shouldn’t be worried about, as he’s something of a “child.”

Jax meets with the gang and reveals his plan to slowly but surely destroy the man who did him and his family.

Nero and Wendy are in the care together and they talk about their experiences with drugs and addiction. Nero drops Wendy off at the school but she asks that he come in with her. He gives in and says that he’ll go check it out so long as she runs his errands with him afterwards.

Jax and his crew drive unleash fire on the crew that Tig and Ratboy were stalking. One of the men gets away with a briefcase. Jax and Chibs go after him in the truck. Eventually, Jax, driving, and Chibs, shooting, run the guy off the road. The man tries to escape but fails. Jax opens the briefcase only to find heroin inside. The man says that his boss trades weapons for heroin. Jax shoots him in the head.

Wayne goes to visit Gemma in her office. Gemma tells him that he “looks like shit.” He says that he didn’t sleep much, as he spent the night “bound and gagged in a bathtub.” Gemma jokes, “How much did that cost ya?” Wayne doesn’t think it’s all too funny, though, and says, “Nothing. Juice didn’t charge me.” Gemma has a surprised look on her face. Wayne says that he knows she’s been helping him out lately.

Wayne tells her that he knows it must not have been easy for her to choose to put friendship above “club rules.” She says it wasn’t, that the decision didn’t come easy to her. Before Wayne leaves, he offers his help and to let him know if there’s anything he can do.

A little while later, Gemma brings Wayne some tea in his trailer. He’s sleeping, knocked out cold. Gemma sets down the mug of tea on the table and notices Tara’s murder file sitting there on the table as well. She opens it, but after seeing the gruesome photos, quickly shuts it. Then, she discovers Wayne’s new Private Investigator license.

Wendy and Nero are on their way back home when they stopped by Lin’s gang. Nero’s ordered to bring Jax to him immediately.

Gemma returns to Juice. She tells him he needs to get the hell out of dodge. Immediately. She gives him a burner phone, $4300, and instructs him to go to her dad’s house until they can figure out something more permanent.

Nero meets with Jax and his crew.

Juice begins heading out of town.

Henry arrives and goes off on Jax. Jax, however, plays coy and doesn’t reveal that he was behind the attack.

Jax and his crew plant the heroin in two hoodlums’ house.

Juice returns to the apartment in Charmin. He couldn’t leave his home.