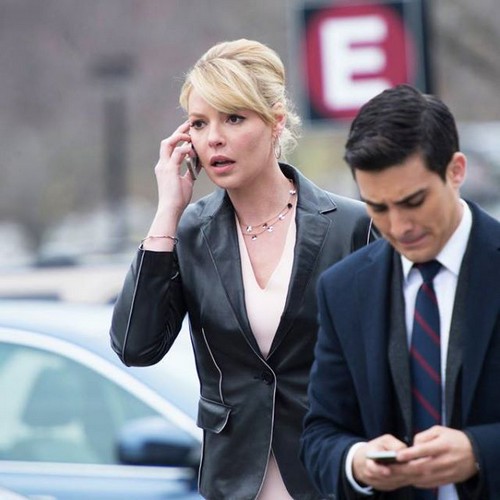 Tonight on NBC State of Affairs airs with an all new Sunday November 24, season 1 episode 2 called, “Secrets & Lies,” and we have your weekly recap below.  On tonight’s episode, the team scrambles against the Russians over a stranded submarine that houses U.S. secrets. Elsewhere, President Payton [Alfre Woodard] appoints a formidable new CIA director.

On the last episode, CIA Analyst Charleston Tucker (Katherine Heigl) still couldn’t remember what really happened a year ago when the diplomatic convoy she was on was attacked in Kabul. While she and then-Senator Payton (Alfre Woodard) barely made it out alive, Charlie’s fiancé, Payton’s son Aaron (guest star Mark Tallman), wasn’t so lucky. It was the one-year anniversary of Aaron’s death; Payton was president, Charlie was her CIA briefer and together they were faced with a choice – try and avenge Aaron’s death by going after Fatah (guest star Farshad Farahat), the terrorist responsible for the convoy attack, or hold off in favor of taking down his entire network in the future. Adam Kaufman, Sheila Vand, Cliff Chamberlain, Tommy Savas and David Harbour also starred. Guest starring Chris L. McKenna, Ramsey Faragallah and Derek Ray. Did you watch the last episode? If you missed it, we have a full and detailed recap right here for you.

On tonight’s episode as per the NBC synopsis, “Charleston (Katherine Heigl) and the team are in a race against the Russians over a stranded Russian submarine holding six months of stolen U.S. secrets — their one advantage is that they have a CIA asset on board. At the same time, the texter persists, sending Charlie a damning picture, while Nick (guest star Chris L. McKenna) forces her to question if Fatah was ever really her asset. Meanwhile, President Payton (Alfre Woodard) appoints a new CIA director, the formidable Ray Navarro (guest star Nestor Carbonell). Adam Kaufman, Sheila Vand, Cliff Chamberlain, Tommy Savas and David Harbour also star. Guest starring Courtney B. Vance, James Remar and Alon Moni Aboutboul.”

This is definitely one series that you don’t want to miss. Don’t forget to stay tuned to Celeb Dirty Laundry where we will be live blogging every episode of State of Affairs first season.

Tonight’s episode of State of Affairs kicks off with two divers in the Bering Sea in the United States territory.  There is a storm and the ship that they are diving form loses the tether connecting them.  The boat is damaged in the storm and slowly sinking.

Meanwhile, Charlie is at dinner with Constance and her husband – they’re celebrating Aaron’s birthday.  They go around the table and make a wish for him, Constance wishes for justice and wants the people that took her son to pay for it.  Marshall says that he wishes to know the truth about what really happened.  Charlie promises them she will find them the truth and justice.  When Charlie leaves dinner she receives a mysterious text of a photo and the message “remember me.”  She calls Nick and leaves him a message – telling him that there is an emergency and someone has a photo they shouldn’t have.

On the sinking ship a leader named Anatoliy stabs two of his crew members to death and then climbs in to the captain’s chair and begins radioing for help.  Earl and Charlie receive the calls from a “potentially distressed asset.”  They pull up his code name “Nightfall” and learn he has been in the Russian navy since 1980’s.  He tells them he has killed two officers and locked himself in the room and it will be a moment before he is discovered, he says their ship is “dead in the water.”

Charlie, Earl, and their crew try to figure out what the Russian army is doing so far in American waters.  They radio Anatoliy, and ask him what his mission is.  He says they were tapping the fiber-optic cables at the bottom of the waters and recording everything.  They have approximately six months of  American intel gathered on their ship.  Charlie learns that one of the lines that the Russians recorded is full of their warfare and they can access the names and addresses of all of their assets.

Charlie briefs Constance on the submarine accident, and reveals that they have an asset aboard with the code name “Nightfall.”  Charlie explains that they tapped in to their intelligence – and the asset is living on borrowed time.  They rerouted one of their ships, but it won’t get there for at least another twelve hours.

Nick arrives at Constance’s office and she shows him the picture that she received.  Nick insists that he isn’t behind the texts.  He tells her that if it will make her feel better she can break their oath to the CIA and tell Constance about the attack.  Charlie doesn’t want to tell her until she knows who is sending the texts, and she wants Nick to help her figure out who it is.  Nick is sure that the person sending her the messages is Fada, Charlie says that they need to find him and find out what he knows.  Once he tells her why Aaron was killed she is going to put a bullet in his head herself.

After Nick leaves, Maureen hounds Charlie about what they were talking about in her office.  She tells Charlie that she despises Nick and she seen him meeting with the secretary of defense yesterday.  Charlie is confused and asks what Nick was doing there – Maureen has no idea, but she plans to find out.

Charlie has Earl check the ship’s time ETA, they are still 10 hours away from the sub.  Someone from the Russia house arrives, and verifies that “Nightfall” is their asset.  But, other than that he is useless, he reveals that Anatoliy’s handler was Marty and he passed away.  Charlie contacts Anatoliy on the radio again, and he reveals that he knew Charlie when she was a child and she used to play with his daughter.  Charlie reassures him they are going to save him, he reveals that he is running out of time.  Earl notices two Russian ships moving quickly to the submarine, and at that rate they are going to get their way before the US ship does.

Charlie contacts Constance and fills her in on Anatoliy, Constance says she is working on getting another ship en route.  Then she breaks the news to Charlie that she is holding a press conference and announcing the new CIA director, she has selected former Governor Ray Navaro.  Charlie meets with Sid real quick and tells him to find the person sending her the texts, then she heads to Ray’s coronation.  Before the ceremony starts Constance takes Charlie aside and tells her that the Russians are threatening to fire on their ship if they interrupt their rescue mission.  She tells Charlie she has no choice – she needs to tell Anatoliy to commit suicide and sink the ship before the Russians get to it and get all of their intel.

Charlie heads back to the office and radios Anatoliy.  He is panicked and tells her that the Russians are welding through the door and they are going to find him at any moment.  Charlie explains that the Russians are going to get there and get all of the US secrets before they can top them, and America’s secrets need to be hidden for all time.  Anatoliy asks Charlie to get a message to his daughter, she’s a pre-med student in college now.  Charlie records the message on her cell phone, and then Anatoliy disconnects.  He rushes through the submarine shooting the Russians that get in his way until he gets to the motherboard  – and he destroys it, which sinks the submarine.