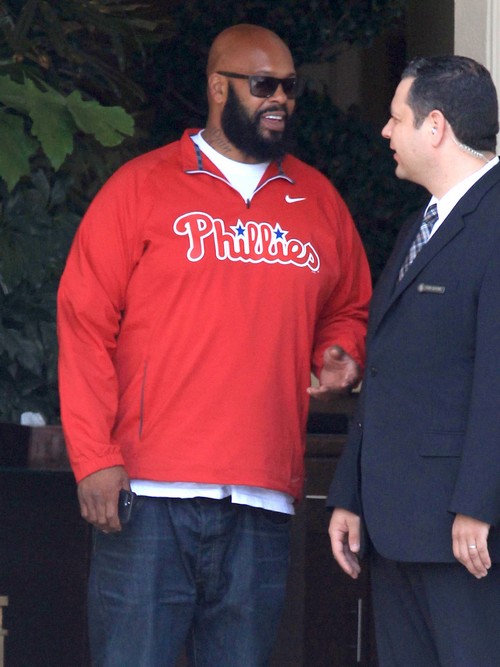 Have you ever noticed how the same names in the rap music world are synonymous with trouble? They may keep their noses clean for awhile but eventually they grab another negative headline due to either violence, criminal activity or both. Suge Knight is precisely one of those guys. Suge Knight, the former CEO of Deathrow records, was shot six times at about 1:30am while attending a Pre-VMA party hosted by (ironically enough) Chris Brown.

Several shots rang out at the 10AK club in West Hollywood and in spite of being hit in the stomach, arm and various other places Suge was able to walk out the door himself. A cop spotted him and apparently helped Suge to a squad car where he waited for an ambulance. TMZ has reported that as of 8:45AM EST Suge was out of surgery and resting comfortably in ICU and that he is expected to recover from the shooting.

Suge has been linked to the death of Tupac Shakur ever since the rising rap star was gunned down on a Las Vegas street in September of 1996. Tupac had served a reduced sentence on a sexual assault because he had ratted out his own gangbanging crew and it has been believed to be an inside job. Sure the guy had enemies, but rats don’t survive in the circles that Tupac ran in and on that deadly night, Suge just so happened to be driving the car carrying Tupac- minus any of the rappers bodyguards. Suge was sitting inches away from Tupac yet not shot and most insiders believed that he was a huige part of the set up that killed Tupac.

Here we are nearly two decades later and old rivalries don’t die at all, instead people do in this culture. Was Suge’s shooting last night to finally avenge the death of Tupac? That’s very possible. Sure Suge has to have his share of other enemies but when it comes to his own crew he has proven time and again not to be a rat. That probably means that this shooting is much more likely to have a Tupac Shakur revenge connection. Do you think the police will ever find out who shot Suge Knight last night or will it ultimately be an unsolved crime? Tell us your thoughts in the comments below!