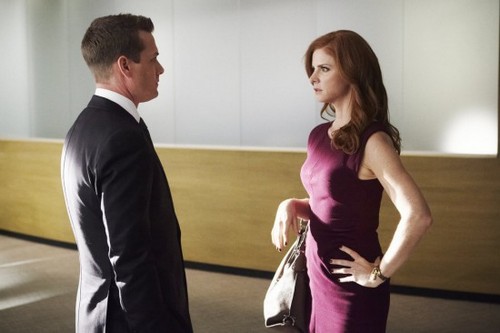 SUITS returns to the USA network tonight with an episode called “Heartburn” In it a major client demands that Harvey and Mike perform an unpleasant task; Louis faces a difficult challenge; Laura collects an old debt.

On the last episode as a gift to Harvey for helping him out with Louis, Mike asked him to first chair a case he’s been pursuing. Stemple hinted that he wouldl be able to fix the case, and later confided in Harvey that he did the same in the two previous cases he won. Mike was able to find other evidence that turned the tables on Stemple.  Mike was reminded that his career would always be working in the background. Scottie manipulated Jessica into giving her a case that belonged to Louis, causing a rivalry between Louis and Scottie to erupt. Louis and Katrina were unsuccessful in trying to work the case back to themselves, and Louis saw his standing at the firm being forever affected by the appearance that Scottie was able to bully him.

On tonight’s episode while Harvey and Mike have unpleasant work to do for one of their biggest clients, Louis faces a huge challenge and Rachel tries to collect on an old debt.

Tonight’s episode looks like it is going to be great and you won’t want to miss it, so be sure to tune in for our live coverage of USA Network’s “Suits” at 10:00 PM EST! While you wait for our recap hit the comments and let us know how excited you are for the season 3 episode 14 of Suits tonight.

Tonight’s episode begins with Rachel looking over her tuition bill and stressing out over the expense for law school. Mike advises her to talk with Louis about the promise to pay her tuition. She is hesitant about having the conversation with him now, but after realizing how much she’s be in debt and with Mike’s encouragement, decides she’ll have the talk with Louis.

Louis fights to get to court on time, and resorts to chasing after cabs. Donna meets up with Harvey in the hallway and asks what he did to upset Scottie. He has a special coffee in hand for her, but doesn’t even know she left for Chicago, so Donna knows he must have done something. Harvey lets her in on what happened.

Louis makes it to court a few minutes late, but still in time to give his closing argument. Louis gives a compelling closing statement and as he wraps up, he seems to have trouble breathing and actually collapses into his chair. The baliff is told to call an ambulance.

Jessica shares with Harvey that while Mike may have known there would be a glass ceiling, he may not have realized how realistic that glass ceiling would be. Harvey and Mike meet with an arrogant client with a problem employee who wants to leave and start a competing business. Mike comes up with a great idea but the client replies that if he wanted to hear from the junior associate, he would have asked his opinion. Harvey stands up for Mike, but the client is undeterred. He tells Harvey how he wants to handle the guy and tells him to have “his boy” (referring to Mike) draft everything up. Mike calls Harvye on not pushing back after the client made his decision on how to handle. Harvey explains that they need to handle it the way the difficult client wants to handle it.

Jessica informs Harvey and Donna that Louis had a heart attack. Jessica tells Mike and Harvey to make sure no cases slip through the cracks and that no clients find out. Mike tells Rachel about Louis and she feels bad for only thinking of her talk with him about the tuition. Mike tells Rachel to talk with Jessica. Harvey and Mike want to see Louis but Jessica had shared that he didn’t want anyone to see him. Donna goes to see him anyway. Donna tells him how concerned she is and that he needs to take care of himself because she’d be devastated if anything happened to him. She holds his hand and sits at his bedside.

One of the two clients who Mike and Harvey met with earlier comes back to talk with him and shares that he will never move up at Gianopolis and asks if there is any way Mike can help him with getting out of there. Mike shares that he cannot help because it would be a conflict of interest. He shares that Louis cannot help either for the same reason. Mike references the fact that the situation is similar to the non-compete they met about earlier. Bothered by Mike’s unwillingness to help, he walks out stating that he will find someone to help him. Mike leaves him a case reference that highlighted a flaw in non-compete agreements after the client officially gives notice that they won’t be using them any longer.

Rachel goes to talk with Jessica about the tuition. Jessica tells Rachel that paying for her tuition was not part of the agreement when she came back. Rachel explains that it was and Louis agreed to it. Jessica stays strong in her opinion and tells Rachel she would never have approached such a thing even if Louis had agreed. She tells Rachel that she is not about to bother Louis right now either. Rachel understands and agrees but storms out.

Louis is visited by his girlfriend, Sheila, in the hospital. She is really upset that he is working when she walks in and sees him writing. She argues with him, but then finds that he was actually writing a letter to her and wants to propose. She tells him that she doesn’t want him to ask her because he is scared of dying alone. He tells her that is not the reason, and gives her an amazing proposal, on one knee.

Harvey’s arrogant client calls him to the table on the fact that his number two guy has just given his resignation after citing a loophole in the non-compete agreement he has, shortly after the meeting with Harvey and Mike. The client, Tony, blames Harvey at first. When Harvey denies it, he blames Louis. Harvey shares that that is not possible since Louis was out. Tony tells Harvey that he better do whatever it takes to get Jonathan to stay.

Harvey questions Mike about the Jonathan situation. Harvey then brings up Mike’s conversation with Jessica. He tells Mike he thinks he did what he did because of how he feels about his own position. Harvey demands that since he found a way to help Jonathan break his non-compete, he now has to find a way to enforce it.

Rachel shares with Mike what happened during the meeting with Jessica. Mike tells her to take the emotion out of it and figure out how to enforce the contract. He reflects on his own comments, knowing he has to do the same.

Louis comes back and hugs Harvey with relief. Donna is happy to see him back and happy. Meanwhile. Mike pays a visit to the man who hired Jonathan. While the man tells him that he is aware that Jonathan was under a non-compete agreement, he was able to break it. Mike informs him of the fact that the algorithm Jonathan created was while he worked under his current company, making it the company’s intellectual property, and not something he can share with the new company, with or without a non-compete agreement in place. Mike leaves him with the parting words that he can do whatever he wants, but that he should plan for a lawsuit if he intends to use the intellectual property that belongs to his competitor.

Rachel visits Louis and presents her issue as a vague contact issue of her friend to see how he would honestly answer. When he shares that her friend was stupid for not getting her employment deal in writing, she gets very upset and leaves without telling him the true meaning of her visit.

Louis, back at home, asks his girlfriend to move to New York and she shares that she does not want to move to NY. Back at the office, Rachel shares what happened with Donna. Donna tells Rachel she should tell Louis the truth. Rachel is more upset about being played than the money. Jessica visits Louis and congratulates him on his engagement. Louis gets emotional after Jessica brings him a special gift.

Jonathan runs into Mike and he pleads his case to him and asks for him to go off the record and help him out. He tells Mike that now he will be stuck where he is at forever with no hope of moving up. Afterwards, Mike goes to Harvey and asks what he can do to change his situation. He realizes that now he is stuck forever, not even able to make good by going to law school because he is already established as an attorney. Harvey tells him his only option is to go to some small town where no one would ever find out and hang a shingle to be the boss. But he reminds him what an amazing attorney he is in NY and the fact that he’d never be able to come back to this if he leaves.

Mike gives Jonathan some advice that may be more helpful and benefit everyone involved. Back at the office, Rachel asks for Harvey’s presence as she pleads her case with Jessica. She seems to win. Meanwhile, Jonathan offers Mike a job as in-house council for Gianopolis. Mike helps them work everything out and they see his worth.

Louis asks his fiancé one more time to move to NY. She finally relents after he shares that he feels like Harvey and the gang are his family. The conversation shifts to children. Sheila shares with Louis that she does not want kids. Louis is so upset because he wants children one day. Sheila tells him that since she is willing to give up her home, he should be willing to give up something for her.

Late night at the office, Mike looks at the offer in his hand, Sheila cries, Rachel is excited about her win, and Donna goes to be with Louis, knowing he needs her. Mike finds Rachel and congratulates her. Donna goes to Harvey’s office and tells him to call Scottie as she hands him the phone. Be sure to check back next week as Mike tells Harvey about his job offer.