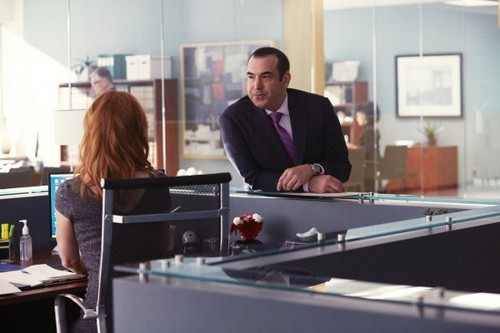 Tonight on the USA Network SUITS finally returns after a long hiatus with its Winter premiere called,“Buried Secrets.”  On tonight’s show Complications arise between Harvey, Jessica and Scottie; Mike faces his demons during a case against an old enemy; Louis’ suspicions may expose Mike.  Did you watch the last episode before the hiatus? We did and we recapped it right here for you!

On last week’s show Ava’s attorney for her malpractice suit was Travis Tanner, whose strategy was to get Harvey to settle by attacking Scottie both personally and professionally. Harvey told Scottie that he wanted not only to work with her, but to have her in his life. Jessica learned of Mike and Rachel’s relationship. After initially threatening to break up with her if she went to Stanford, Mike was again supportive of Rachel, and she decided to go to Columbia in spite of her rational analysis in favor of Stanford. Louis got romantically involved with Sheila Sazs.

On tonight’s episode things get complicated when Harvey mixes business with pleasure and gets caught between Jessica and Scottie. Painful memories plague Mike as he uses a case to exorcise demons against an old foe, while Louis’ suspicions threaten to expose Mike.

Tonight’s season 3 episode 11 looks like it is going to be great and you won’t want to miss it, so be sure to tune in for our live coverage of USA Network’s “Suits” at 10:00 PM EST! While you wait for our recap hit the comments and let us know how excited you are for the season 3 episode 10 of Suits tonight.  Check out the sneak peek below of tonight’s episode.

Tonight’s episode of Suits opens with Rachel and Mike waking up together in the morning.  Rachel reveals to Mike that she wants them to move in together if the offer is still on the table.

Scottie and Harvey wake up together, and Scottie reveals that she got an offer at a firm.  It turns out Harvey has been pressuring Jessica to give Scottie a position at his firm.  Jessica is less than thrilled about the idea because she knows they are involved with each other.

Louis is sitting in his office talking into his tape recorder about Shelia, and he is convinced that Mike Cross never went to a real law school.  And, then his batter died.

Scottie is negotiating her pay with Jessica.  Scottie makes it clear that she hopes to become a partner at the firm.

Scottie pays Harvey a visit afterwards, and she is less than thrilled.  Jessica is making her pay a $500,000 buy-in before she hires her at the firm.  Scottie doesn’t want to pay the $500,000 buy-in if she and Harvey break up and she has to leave the office.  She has an offer at a firm in Chicago that isn’t going to cost her half a million dollars.

Mike tracks down lawyer Nick Rinaldi, a lawyer that is suing one of their clients.  He has a bone to pick with Rinaldi because when his parents were killed Rinaldi represented the person that was drunk driving, and he only affered his Grandma a years’ worth of rent money for their lives.  He threatens Rinaldi that he isn’t going to let him to do the same thing to his client.

Louis is determined to find out whether or not Mike Ross actually has a real law degree, he is drilling Donna about the day that they hired Mike.  He went through the Harvard files and realized that there isn’t one on Mike, but there is one on Harvey.  Donna tells Louis he is crazy, but if he really thinks Mike didn’t go to Harvard, then he should just call them and ask them for a copy of Mike’s transcript.

Harvey tags alone with Mike to the deposition room to watch him go head to head with Rinaldi.  Mike begins having flashbacks of when Rinaldi screwed his parents, and Harvey has to step in and save him.

Donna pays Harvey a visit and tells him that Louis has been snooping around the Harvard file room and he thinks that Mike didn’t go to Harvard.  Harvey doesn’t seem concerned about it though.

Rachel brings Harvey some food, but he is pouring over his deposition paperwork.  He doesn’t want to take a break, he is determined to get Rinaldi’s case dismissed.

Scottie and Harvey are out to dinner, and a man named Michael arrives.  Scottie set up the dinner, because she knew he was going to be at the restaurant and she is determined to land him as a client.  Scottie invites him to join her, and kicks Harvey out of the restaurant.

Mike is in court facing off against Rinaldi, and he destroyed Rinaldi’s expert medical witness.  Rinaldi is representing a women that is suing a medical practice for malpractice because his heart stints malfunctioned and he died, Mike is representing the medical practice.  After court he reveals to Rinaldi that he has photos of his client drinking alcohol just two hours before he died, and the doctor told him not to drink, so Rinaldi’s case is going to get thrown out.

Harvey admits to Donna that he may have been wrong, he received Mike’s transcript from Harvard.  (Obviously Donna and Harvey faked it.)  He thinks something is still fishy though, because Sheila never makes filing mistakes.  Donna turns the tables on him and begins cursing him out for breaking into her personal computer files and looking at the list of interviews the day that Mike was hired.  Harvey runs back to his office and finds Sheila waiting for him, she leaves him a hotel key to meet her later tonight.

Mike returns to the office and finds Rinaldi waiting for him.  Rinaldi begins lecturing him about “bullying someone who deserves sympathy.”  Then he gives Mike the file for his Grandma’s settlement.  He reveals that the reason his Grandma settled for such a small sum is because his dad had two drinks that night, and was legally drunk.  Mike had no idea.

Harvey pays Jessica a visit and pressures her about dropping Scottie’s half a million dollar buy-in.  Harvey tells Jessica he has an idea where they can both get what they want.

Harvey reveals to Scottie that he got Jessica to waive the buy-in, but Scottie has to sign an iron-clad agreement that if she leaves the firm she won’t take any of their clients with her.

The next day Mike meets with Rinaldi, he tells Rinaldi that he isn’t going to let him screw his client.  But, he gives him inside info on a different company he can sue.  And, advises him to tell his client to take pictures of her dead husband drinking off Facebook before he goes after the next company.

Scottie did some research, and she is furious.  She curses Harvey out when she realizes that Jessica didn’t waive her buy-in, Harvey paid it for her.  She insists that they need to be honest with each other.  So they sit down and confess every sneaky thing they have done to each other since they were in law school, including throwing out research papers and telling other people they had crabs.

Mike arrives at Rachel’s house for their furniture negotiations, but instead Rachel surprises him with a surprise anniversary of their first date and a candle lit dinner.

Louis calls Simon into his office and asks him what grade he got in a certain course, Simon reveals he got an A-, and adds the teacher has never given anyone at Harvard an A+.  Apparently Mike’s fake transcript says he got an A+ in that class, and Louis is not buying it.