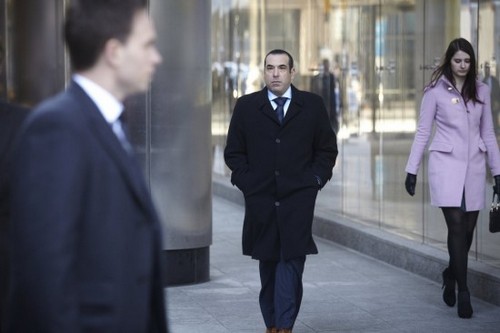 SUITS returns to the USA network tonight with an episode called, “No Way Out.”  In it, Harvey and Mike clash with a tenacious U.S. attorney in the Season 3 finale. Elsewhere, Scottie and Harvey struggle to reach a compromise, and Mike and Rachel have different ideas about the future.

On last week’s episode Harvey faced off with a relentless attorney who went after one of his biggest clients, Mike had to make a big decision, and former name partner Charles Van Dyke had an ax to grind.  Did you watch last week’s episode?  We did and we recapped it right here for you.

On tonight’s episode things are anything but business as usual when Harvey and Mike find themselves at odds with a tenacious U.S. Attorney, Scottie and Harvey can’t seem to get on the same page and Mike and Rachel clash over plans for the future.

Tonight’s episode looks like it is going to be great and you won’t want to miss it, so be sure to tune in for our live coverage of USA Network’s “Suits” at 10:00 PM EST! While you wait for our recap hit the comments and let us know how excited you are for the season 3 finale of Suits tonight.

Tonight’s Suits finale begins with Harvey and Donna arguing about whether it was a mistake to tell Scotty about Mike. Donna says she wants Mike to be happy and they toast to Mike staying at the firm.

Mike arrives at home and Rachel is cooking dinner to celebrate his new job. Mike breaks the news that he didn’t take the job and is going to stay at the firm Rachel is furious, she doesn’t understand why he would want to “stay a fraud.” Mike explains that he went to see Quelling and it caused him to change his mind, and he isn’t ready to leave.

The next day Mike is heading into the office and a man stops him out front. He says he is from the US Attorney’s Office and they need to talk. Mike climbs into a black SUV with them so they can talk in private.

Harvey arrives at the office and Scotty is waiting for him. He announces that Mike is staying and he is going to do better at “opening up to her.” She kisses him and says they should go out tonight, Mike agrees.

Donna barges in and says her friends Stephanie from the US Attorney’s Office just called her and told her that they brought Mike in for questioning.

Meanwhile at the US Attorney’s office Mike is being questioned for transpiring with Harold to pay off witnesses in their case against David Hessington. Mike denies the claims. The attorney tells Mike if he rolls over on Harold he will cut a deal with him right now.

Harvey bangs on the interrogation room’s door and the attorney comes out, Harvey demands that they release him immediately, they have no grounds for holding him.

Louis stops Jessica in the hallway and says that Harvey missed a meeting. He is concerned that Harvey may be sick, and could have a heart attack like he did. Jessica reassures him that Harvey is fine. She barges in to Donna’s office and wants to know where Harvey is. Donna informs her that it was an emergency and Mike got called in to questioning.

Harvey tracks down Allison. Allison says that she went straight to the US Attorney’s office when she found out what had happened and she has no idea what Harold told the US Attorney because she fired him.

Mike pays Rachel a visit and fills her in on what happened. He tells her that he could save himself he turns Harvey in. She tells him that she knew he should have taken that job. Rachel warns him that if they go through his records they will be able to tell he isn’t in the bar. Mike tells her that isn’t an issue because he had Lola hack into the computer system and put him in the bar. Rachel is furious.

Harvey heads into Jessica’s office and fills her in on their Harold situation. Jessica is paranoid that they are going to snoop around and realize that Mike is not in the bar. Harvey reassures her that Mike is no in the bar. Scotty overhears them talking and asks Harvey if the US attorney’s claims have merit. When he doesn’t answer, she storms out, furious.

Harold chases Mike down outside of the office. Mike tries to tell him that he can’t speak to him because of the case. The US attorney Eric Woodall rounds the corner with FBI agents, and tells them that they are both under arrest for conspiracy to defraud the US government. They are both cuffed and hauled away.

Donna meets with her friend Stephanie to try to get some information on Eric Woodall. Stephanie reveals that Eric hates dirty lawyers and that is why he is coming after Harvey and Mike. According to Stephanie he “has nothing” but he “can win with nothing,” she warns that he will bend the law to win.

Scotty barges into Jessica’s office and demands that she tell her what is going on. Jessica says that she and Harvey made an impulsive deal for her to come here, and obviously it isn’t working out.

Eric is holding Mike in an interrogation room, Mike wants to call Harvey but Eric won’t allow him. Mike says he is denying him his rights, Eric insists that Mike might be a terrorist so he can deny him a phone call. Mike stays strong he says he isn’t going to talk, Eric reminds him that Harold is right next door and he might start talking. He turns on the TV so that Mike can watch Harold in his interrogation room where he is frantically pacing.

Harvey heads into Jessica’s office, Jessica reveals to him that Scott wants to leave and is trying to get out of her non-compete clause. He tells Jessica that if she doesn’t want to be here then she should let her go.

Quelling runs into Harvey in the hallway and asks him what happened to their deal. Harvey says their deal is out the window since Mike is sitting in the US Attorney’s interrogation room. Quelling pushes him and tells him he should watch over his shoulder for the “rest of his natural born life.”

Harvey fills Louis in on Mike being taken in to the US Attorney’s office. They are en route the attorney’s office so that they can get Mike back out of custody. Louis is freaking out because he knows there is no way Harold won’t break. Harvey explains that is why Louis is coming along, he is going to go in to the interrogation with Harold and “shut him the hell up.”

Donna slips into Jessica’s office, and she vouches for Mike and Harold, and reveals they are currently in custody. Donna doesn’t think that Mike will rat out Harvey, Jessica thinks it may be a possibility.

Scotty is leaving a note for Harvey in his office and Donna catches him. Scotty says that Harvey isn’t the man she thought he was. Donna tells her she needs to either accept what she got or walk away.

Harvey slips into the interrogation room with Mike and tells him to hold tight. He reveals to Mike that Louis is in with Harold and convincing him to keep quiet. Louis enters Harold’s room and Harold is not happy to see him. He tells Louis to go to hell. Louis tells him that all he has to do is trust him, and he can walk out today.

Meanwhile Harvey is giving Mike a pep talk. Harvey gives Mike permission to give him up, he smashes the camera with the chair and tells Mike that he takes full responsibility for everything that happened. Louis opens the door and walks in with Harold. He manages to convince him not to sign any deals or statements, so they don’t have a case against Mike or Harvey and they are free.

As they are leaving Harvey stops and curses out Eric Woodall. Woodall warns him that he knows he is a dirty lawyer, and now he is on his radar. Mike, Harvey, and Louis head back to the firm. Rachel is relieved to see Mike in one piece and rushes to hug him. Harvey finds Scotty sleeping in his office and waiting for him. Harvey tells her that they are going to let her out of her non-compete if she wants to leave. She tells him that she can’t stay, and he apologizes to her and says he loves her.

Harvey checks in on Mike and Mike announces to him that he is leaving the firm, he blames himself for all of the shady things Harvey has done since he began working at the firm.