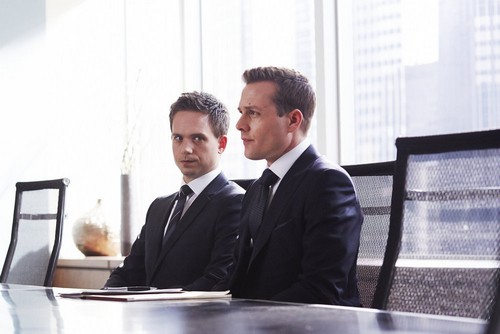 SUITS returns to the USA network tonight with an episode called “Know When to Fold ‘Em” a persistent attorney goes after one of Harvey’s clients; Mike is faced with a difficult decision; former name partner Charles Van Dyke returns with revenge on his mind.

On the last episode  Louis suffers a heart attack in court. While Harvey and Mike had unpleasant work to do for one of their biggest clients, Louis faced a huge challenge. Rachel tries to get Jessica to honor a verbal agreement Louis made with her some time ago that included then-Pearson Hardman paying Rachel’s law school tuition.  Did you watch last week’s episode?  We did and we recapped it right here for you.

On tonight’s episode Harvey faces off with a relentless attorney who goes after one of his biggest clients, Mike has to make a big decision, and former name partner Charles Van Dyke has an ax to grind.

Tonight’s episode looks like it is going to be great and you won’t want to miss it, so be sure to tune in for our live coverage of USA Network’s “Suits” at 10:00 PM EST! While you wait for our recap hit the comments and let us know how excited you are for the season 3 episode 15 of Suits tonight.

Tonight’s episode begins with Louis shares his depressed state on the phone. He is at home laying on the couch not able to work because of his broken heart. Scottie is still upset about what seems like Harvey taking Louis’ side. Harvey apologizes and slowly gets her to come around.

Harvey believes his client is being extorted after an unknown lawyer stops by the office and reveals some disturbing news. Mike tells Rachel about the job offer and she seems pretty excited about the possibilities for Mike.

A former partner in the firm pays a visit to Jessica and gives her formal notice of his demand to audit the firm’s books. He leaves the office and tells Jessica he believes she is hiding profits…or something.

Harvey and Mike meet with the desperate lawyer who talked with Harvey before, James Kwelling. He is desperate to make some money by stirring up trouble for a Pearson Spector client, with a promise for even more trouble if his demands are not met. Shortly after the meeting, Mike shares with Harvey that he received a job offer. Harvey tells him that if it were him..he would take the job. He tells him this way, he won’t have to be committing fraud.

Rachel is approached by Louis’ assistant to help with getting the books together for the audit that Jessica asked for Louis to handle. He is still in no condition to come back. Scottie comes to visit Harvey and he snaps at her because he is stressed about Mike and James. Donna comes in and tells him that he is taking his anger out on the wrong people.

Charles continues to make life hell for Jessica and makes a few threats to her if what he believes he is owed is not paid. Just when Jessica thought she had him beat, he came back with information about their agreement that makes her on the hook for the money. Harvey meets with James and the two play a serious game of poker. The mind games Harvey is playing is much more significant. Harvey gives James one more chance to accept the original offer.

Mike gives his demands to his potential new employers, but they won’t bite, noting that the phenomenal package he is asking for is over the top for a reason…he needs a very good reason to justify leaving the firm.

Rachel tells Mike that she is scared to tell him her advice because if he takes it and it is wrong, he will blame her forever. Later, Rachel sees Katrina getting fired after their plan to protect Louis backfired and Jessica looked stupid in front of Charles. Meanwhile, Donna tries to talk Mike into staying and shares how much Harvey relies on and needs him.

James comes back to Harvey with a new request and some new information that could destroy him. James found an old case that he claims Harvey and Mike used bribery to win. After poking holes in the inconsistencies in the case, he tells Harvey that if he doesn’t get what he wants, he will take it to the bar for review. Mike’s name cannot be mentioned with the bar so this is big and James has Harvey right where he wants him. For the moment.

Mike tells Harvey he plans to leave. He thinks that will solve the problem with James. Harvey tells him that will not help matters and that they need to have a plan together by tomorrow morning. Rachel begs Jessica for mercy and comes clean about the plan she and Katrina came up with, and the reason for doing what they did.

Jessica visits Louis and updates him on what has been going on. Louis gets angry enough to commit to having his team work all night if they have to to follow through on his idea for how to protect the firm from Charles.

Mike visits Harvey and gives him some damaging information about James that is very incriminating. Harvey tells Mike to meet with James as his going away present…and be a lawyer for the last time. Mike visits James and shares the information he has. James relents and tells Mike he will drop the suit.

Jessica meets Charles at the courthouse and attempts to stall him as she waits for Louis to arrive. Donna and Harvey talk and she tells him that he should not tell Scottie about Mike’s secret. He blows up telling her that not telling Scottie is hurting their relationship because they continually fight over her feeling he is hiding something from her. Donna tells him he surely shouldn’t let the cat out of the bag now because Mike is leaving and Scottie is pissed at him again and may end up blowing his secret to get back at him.

Just then Mike walks in and announces to Harvey that he has decided to stay after all. He shares that he went back to his hacker to get his name entered into the state bar. Will this be too risky a chance to take? Next week is the season finale…so be sure to meet us here same time next week!