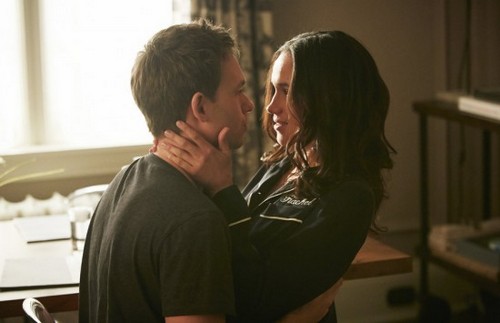 SUITS returns to the USA network tonight with an all new episode called, “Breakfast, Lunch and Dinner.” On this evening’s episode, a takeover battle pits Harvey and Mike against one another.

On the last episode Mike and Harvey ended up fighting over investment-banking strategies in the Season 4 opener and this caused waves across the firm, affecting not only Harvey and Mike’s relationship. Meanwhile, Pearson realized a former district attorney could have been pursuing revenge against Harvey and the firm. Did you watch the last episode? If you missed it, we recapped it all right here for you.

On tonight’s episode a takeover battle pits Harvey and Mike against one another, and the situation is only complicated further by Mike’s relationship with Rachel. Elsewhere, Louis partners with recent SEC defector Jeff Malonein.

Tonight’s episode looks like it is going to be great and you won’t want to miss it, so be sure to tune in for our live coverage of USA Network’s “Suits” at 9:00 PM EST! While you wait for our recap hit the comments and let us know how excited you are for another episode of Suits tonight.

Tonight’s episode begins with Rachel and Mike talking about the bomb she dropped about working with Logan, the married man she slept with in her past. Meanwhile, Louis practices a presentation he plans to give to Jessica. He believes Jeff from the SEC is after them and he wants to take him down. He has no idea that Jessica has agreed to hire him. Jeff shows up and Jessica asks Louis to come to her office where she drops a bomb of her own…he is a new senior partner. As she is talking, Louis seems to be in his own world as he misinterprets Jessica’s words and thinks he hears her indirect messages out loud…she will never give him the respect he wants.

He tells her that there is no reason for Harvey to know about their past as it was a mistake. He cannot understand why Rachel wants to share this detail. She tells him that she lives with the enemy. Harvey could care less once Rachel breaks the news. He has bigger concerns. Mike is stirring up a lot of trouble and Harvey is required to meet with a judge after Mike files a TRO to try to stop Harvey from acting on the deal because of a conflict of interest. Harvey is pretty cocky about it until the judge forces him to stop any buying or trading for 30 days. Harvey meets with Logan again and tells him he needs to pay off Mike to get him off their backs.

Jessica meets with Jeff in his new corner office and Louis sees the way they interact together which makes him even more upset then before. Later, with some encouragement, he decides to go tell Jessica exactly how he feels about Jeff coming on board and him getting passed over again. Jessica tells Harvey to take Jeff out to lunch and he pawns the task off as well through Donna. She catches on all too quickly, but sets it up anyway. Jeff, meanwhile, heads over to place nice with Louis, telling him how happy he is to be working with him. It goes south right away and the two end up in a heated exchange with each challenging one another. They plan to show their stuff in an upcoming deposition.

Mike meets with Logan and Harvey. They offer him 30 million to make a deal and go away. Mike is intrigued but wants to know Logan’s plans for the company. Once Mike learns that Logan wants to strip it down and sell it for parts, Mike says “no deal.” They begin to argue and Mike throws the offer and walks out. Harvey is pissed that Logan came to the meeting, but as they walk out, Harvey now has a plan after he detects a weakness from the competition.

Mike arrives home and Rachel shares her feelings about Mike not taking the deal. She says he made a spectacle of himself at the office and thinks he didn’t move forward because of her past with Logan. Mike gets even more upset. He gets more grief at the office when he is scolded for not taking the 30 million to walk away from his takeover. Mike is informed that the union leader just flipped and if they don’t have him on their side, they are screwed. Mike’s mouth drops when he hears the news, but must feel even worse after being told he needs to take the 30 million or find himself a new job.

Donna goes to see Jessica about Louis and shares a bit about what he’s been feeling. Jessica is empathetic but shares that she makes her decisions on what is best for the firm. Donna understands but has an idea. She thinks at the very least Louis should get the corner office. When Jessica says she cannot do that, Donna sees in her face that she MUST be sleeping with Jeff. Jessica admits they had a past but confirms it has ended. Donna tells her it is important for the firm and Louis that he be given the respect of getting the corner office since Jeff is so new.

Mike requests a meeting with Harvey. He tells Harvey he now wants to accept the deal. Harvey says the office is gone. Mike practically begs, even telling Harvey he’ll take less. Harvey says that ship has sailed and he was foolish to act that way in the meeting. Harvey knows that Mike must know he lost or he’d never come back to tell him he wants to accept the offer. Harvey won’t back down and it seems like he’s giving Mike a lesson and showing him he was right all along and should have listened to his guidance. Harvey leaves and Mike is obviously very down.

Mike gets a wake-up call from his assistant after throwing himself a pity party. Mike knows he needs to get his client to fund the pension to get the union back on their side. Mike lays it all out for him and takes a lot of grief because his client feels like he misled him. It is a heated meeting but it seems Mike may have gotten the point across and may still be in the game. Meanwhile, Jessica calls Louis into the corner office and lets him know the office is his. He is in tears and hugs Jessica.

Harvey and Mike go at it again after Mike shares that he is still in the game and his side has swayed the union vote back their way. Harvey is surprised but won’t show any weakness and is clear that Mike might be smug now, but he still didn’t win…he only made it to round 2.

Can’t wait to see what the next round is like! Be sure to check back right here next week to see what our favorite attorneys are up to!