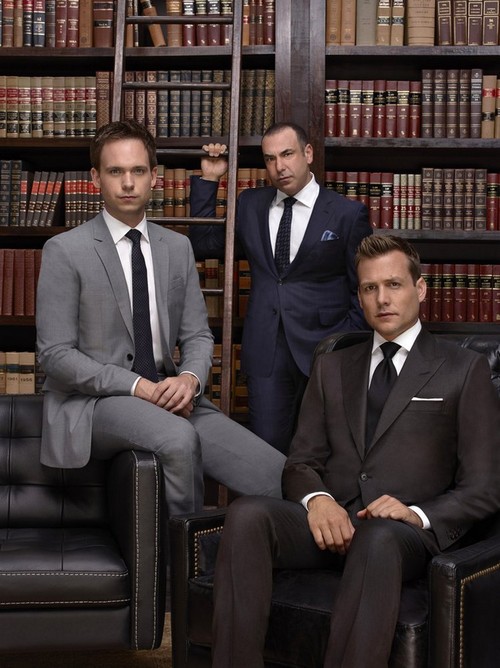 SUITS returns to the USA network tonight with its fourth season premiere, “One Two Three Go…”  On this evening’s episode, Mike and Harvey clash over investment-banking strategies in the Season 4 opener.

On the season three finale things were anything but business as usual when Harvey and Mike found themselves at odds with a tenacious U.S. Attorney, Scottie and Harvey couldn’t seem to get on the same page and Mike and Rachel clashed over plans for the future.  Did you watch last week’s episode?  If you missed it we have a full and detailed recap, right here for you.

On tonight’s episode Mike and Harvey end up fighting over investment-banking strategies in the Season 4 opener and this will cause waves across the firm, affecting not only Harvey and Mike’s relationship. Meanwhile, Pearson realizes a former district attorney may be pursuing revenge against Harvey and the firm.

Tonight’s premiere looks like it is going to be great and you won’t want to miss it, so be sure to tune in for our live coverage of USA Network’s “Suits” at 9:00 PM EST! While you wait for our recap hit the comments and let us know how excited you are for season 4 of Suits tonight.

Tonight’s episode opens with Rachel and Mike at home having a little early morning fun, Jessica heading out to the office, and Harvey getting some morning action after enjoying his scenic view.

Mike has an early meeting and gets started trying to broker a deal for a distribution company that will save the jobs of many employees and make a profit in the process. He arrives at his office and is greeted by secretary, Amy, as she gives him his updates and warns him that his boss is in his office waiting for him and he is NOT in a good mood. Amy was right and Mike gets blasted for the deal he just made because 30% will not make it. He needs to be brokering deals that will bring in at least 50%. Mike gets told to do his job or go back to being an attorney.

Jessica welcomes a late Harvey and tells him about a meeting with Logan Sanders. Jessica shares that he needs to make sure he works some magic because Logan may be on the hunt for a new attorney after just taking over his company. Jessica wants to make sure they don’t lose this client. Harvey, of course, is cocky about the whole thing and heads back to his office where he is greeted by Mike who came to tell him about the deal he’s been working on.

When Harvey comments that he believes Mike is handling it wrong, Mike gets pretty bold and defends his choice by telling Harvey that he is offering someone a chance to survive, rather than going in for a hostile takeover. He thinks his plan will play out perfectly. Mike could care less that Harvey is hesitant to agree and tells him that his way is THE way before throwing out some demands for work and walking out. Somehow I don’t think Harvey is liking their new business arrangement.

Donna tries to intervene to get Harvey and Mike to play nice after she worries Harvey’s insubordinate attitude about supporting Mike’s first big idea may get him into trouble. Harvey plays by his own rules, however, and tells Donna that he doesn’t let anyone push him around. Jeff Malone, from the SEC, comes for a visit and serves a warning that the SEC wants to investigate several of their clients. Jessica figures out what he is really after, and Jeff confirms when he admits to be tired of being a civil servant. He wants a job at Pearson Spector. He has not formally been given the assignment to get on the investigation but will in a week, so he needs a formal offer of employment before then or it will become a conflict of interest. While it could help the firm to have a former SEC employee working for them, Jessica feels like he is strong-arming them.

Rachel visits Mike at work and tells him that while she was at school she got a text telling her to take the rest of the day off compliments of Harvey. Mike can’t believe that he’d let Rachel leave early because the work he left him would require Rachel to work late into the night to get everything prepared. Mike cannot take the slap in the face and goes immediately to see Harvey.

They argue over the idea again and Mike becomes so upset over Harvey’s attitude and the fact that he is not taking him seriously, that he informs him that he’ll be interviewing other firms first thing in the AM, so now he’ll be competing for his client’s business.

Logan comes for his meeting with Harvey. After a short battle between the two overly-confident men, Logan finally gets Harvey’s ear when he talks about a great idea he has for a deal. He tells Harvey about his plans which include a hostile takeover of Gilles Industries. Harvey cuts him off immediately telling him that he has a conflict. Harvey says he’ll be right back as he needs to talk with his colleague.

Harvey goes to see Louis and tells him about Logan’s plan and that he knew about Mike’s plan first. Louis tells him he must stick with Mike since he discussed his plans first. However, Mike put Pearson Spector under formal review. Louis tells Harvey they will have to drop Mike now. Louis has been plotting for most of the episode about making partner.

Jessica heads over to meet with Jeff and we find out some interesting news…the two of them have been sleeping together and having a relationship. She cannot believe how he came to her office with the offer, basically strong-arming her and he didn’t even come to her first. He shares that he didn’t want her to think he was using their relationship and wanted to handle things the way he would have if they were not together. She tells him he cannot work at her firm and be in a relationship with her.

Meanwhile, Harvey meets with Mike and tells him about the conflict that arose because he put the firm under review. Harvey shares if he doesn’t drop this, the firm has to back the other client and they will come out ahead, he warns. Mike is suspicious about the timing and thinks Harvey is doing this because of his feelings for how Mike wanted to work the deal. Mike tells Harvey that he found a convenient way to get Mike to bow out.

Jessica is making dinner in Harvey’s place as he arrives. She is there to talk with him and come clean about Jeff. She also seeks his advice because he has been in the position of mixing love and business. Jessica is fearful of ending up having major issues a la Harvey and Scottie. Harvey tells her she needs to think about what is most important to her.

Mike meets with Walter and tells him that he needs to consider selling his company by trying to earn his trust. He found about his loss and tries to play on his heartstrings and win his trust before it is too late. Harvey tells Logan he needs to move quick if he wants the deal to happen.

Harvey goes to see Mike and Mike tells him he signed the paperwork after going to see Walter. The two are still pretty cold to one another. Later, at home, Rachel admits to Mike that the married man she had an affair with years ago was Logan Sanders.

Next week should be VERY interesting, so be sure to check back for a recap of Suits next week!