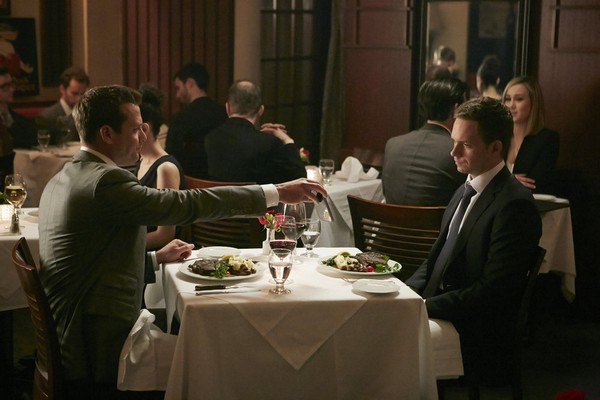 SUITS returns to the USA network tonight with an all new episode called, “Pound of Flesh.” On this evening’s episode, Harvey and Mike agree to a cease-fire; Mike learns the depths of his partner’s ruthlessness.

On the last episode Mike initiated a hostile takeover of Gillis Industries while Harvey and Louis worked feverishly against his efforts. Elsewhere, Jessica and Malone met with Sean Cahill, who had the weight of the SEC behind him in bringing down the firm. Did you watch the last episode? If you missed it we have a full and detailed recap, right here for you.

On tonight’s episode Rachel becomes increasingly anxious about work, school, and the growing attraction between herself and Pearson Specter client Logan Sanders. Meanwhile, Louis helps Donna prepare for a major role while she encourages him to face his fear. Harvey and Mike agree to a ceasefire, but Sam accuses him of collusion and Mike learns how ruthless his new partner can be.

Tonight’s episode of Suits begins with Rachel waking up in a panic when she realizes that it is 9:00 AM and Mike turned her alarm off. He tells her she isn’t getting enough sleep and needs to take a day off, but Rachel won’t hear it.

Meanwhile Harvey is at court, heckling Eric Woodall’s replacement Shawn Cahill. Harvey tells him that he knows he is coming after his clients, and if he doesn’t stay away then Harvey will “pave the same career path for him.”

At the office, Mike is scheming. He pays Harvey a visit and tells him that he is willing to offer Harvey’s client Logan Sanders a settlement. Harvey calls his bluff and says that he knows he hasn’t taken Forseman’s money yet.

Jessica warns Harvey that she seen in the paper that a block of Wexler stock is going up for sale, Harvey is two steps a head of her and he already read it. And, he warns her that Mike Ross read the paper as well and already showed up and tried to get him to sell out. Meanwhile in the fils room, Louis is helping Donna rehearse her part for an upcoming play.

Mike heads back to Sidwell Investment and reveals to Amy that his plan didn’t work. While he is arguing with Amy about what to do next, the phone rings, and Sidwell wants to see Mike.

Jessica pays a visit and tells him to “find a creative way for Logan Sanders to buy the block of Wexler stock.” He informs her that it is illegal, and she reminds him that he helped Shawn Cahill come after Mike’s clients and this would be the perfect way to redeem himself. Later Harvey stops by his office and tells him he needs to hurry up and find a way to buy the stock legally, and if he doesn’t before the end of the day then he shouldn’t bother.

Rachel asks Harvey for a day off from work so she can catch up on some of her law school work. He basically tells her if she takes a day off, then she can kiss her job good-bye, and she needs to stop expecting special treatment because she is still in school.

Donna is still trying to memorize the lines of her character Portia, in a play that is going to open in literally an hour. Louis gives her a pep talk, and confesses that he has stage fright and he never conquered it. He refuses to let her never conquer her stage fright as well. He tells her “your time is now, and you are going to kill it.”

Amanda Austin: Mike finds Rachel up in the middle of the night, working in the kitchen on her lap top. He wants her to take a day off and get some sleep, she explains that she tried to ask Harvey for a day off and he “bit her head off.”

A few hours later Mike meets with Wexler to make him an offer on the stock, Rexler reveals that he already received an offer and implies it is from Harvey’s firm, but tells him he will consider his offer as well. Mike meets Harvey in the bathroom and threatens to report him to the SEC. Harvey laughs off his threats and says he can’t prove they are breaking any laws. Mike heads back to his office, Amy asks him why he isn’t at the hospital. Apparently, Rachel was taken to the hospital, and Mike didn’t listen to his messages so he had no idea.

Mike arrives at the hospital, and the nurse tells her that she is resting and she needs to be left alone. Harvey informs him that she is in room 1024 and sleeping and heavily sedated, the door is locked. Harvey asks Mike to come to a restaurant and eat with him across the street while they wait for Rachel to wake up. Harvey says he has postponed the stock auction, and Mike heads to the restaurant with him. While they eat their steak, Harvey confesses to him that he felt guilty about not giving Rachel the day off when she asked, so that is why he came to the hospital.

Donna has recruited Louis to play a part in the play because her co-star got drunk and injured. Louis has a melt down and begins panicking before it is time for him to go on stage. Donna gives him a pep talk and motivates him to take the stage and “make his case.”

Harvey and Mike leave dinner, Mike says he is heading back to the hospital. As they are walking out, they run in to Shawn Cahill. He reveals that Harvey and Mike are being followed, and accuses them of collusion. Shawn also reveals that the Wexler stock was bought by a shell corp while they were eating steak, and he thinks they organized it. Mike flips on Harvey, and thinks that he went behind his back and bought the Wexler stock, Harvey promises to “make it right.”