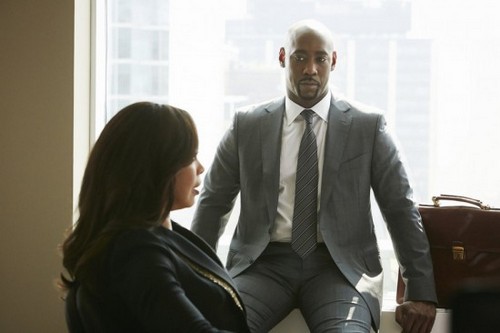 SUITS returns to the USA network tonight with an all new episode called, “Leveraged.” On this evening’s episode, Mike initiates a hostile takeover of Gillis Industries while Harvey and Louis work feverishly against his efforts.

On the last episode Logan Sanders, a client of Pearson Specter, looked to Harvey to confirm that his relationship with Mike wouldn’t prevent them from winning the takeover battle. Elsewhere, misunderstandings arose between Louis and his new colleague Jeff Malone. Did you watch the last episode? If you missed it we have a full and detailed recap, right here for you.

On tonight’s episode Mike initiates a hostile takeover of Gillis Industries while Harvey and Louis work feverishly against his efforts. Elsewhere, Jessica and Malone meet with Sean Cahill, who has the weight of the SEC behind him in bringing down the firm.

The SCC is coming after Pearson /Specter and instead of letting their recently acquired firm addition, Jeff, handled the problem like he’s paid to do – Harvey paid Eric Woodall a personal visit. Now that visit alone could have gotten his clients into some major trouble because Harvey truly didn’t think one through.

Luckily, it’s not Eric sabotaging the firm to get at Harvey. No, he still hates Harvey with a passion but this time it isn’t him. Though he does know who’s behind it and even told Harvey so. And this Sean is working off of some sort of vendetta.

However Harvey has never heard of this person that supposedly doesn’t like him and is working tirelessly to take down Harvey’s clients. But Jeff has met him and there is a history there.

Unfortunately for Jessica, she didn’t realize that until it was too late. She went with Jeff to talk to this Sean in person. They wanted to figure out his motive and what she ended up learning was that Jeff was seconds away from getting fired from the SCC. And Sean had a hand to play in that as well.

Jeff doesn’t even know what’s in his file but he knows that Sean is the reason he has something to fear if that file ever got out. As for walking away from his job – he did that when his bosses asked him to go after Jessica.

Meanwhile Mike brought the extra shares in Walter Gillis’s company despite their current ongoing misunderstanding. Yet he did that without permission form his boss. Mike didn’t get over trouble but was he warned to never do that again and to make sure the firm didn’t suffer because he wanted to win the Gillis case.

So then Mike had to ensure the firm’s stability and to do that – he had to go against Louis. Harvey assigned Louis to help cut Mike off at the knees and when Mike found out – he used Louis’s greatest weakness. He used Sheila!

He doctored up some photos of her with 90s Lorenzo Lamas and then announced their “engagement” to Louis and poor Louis fell for it. Mike was able to win his case against Louis though it did come at a price. Later Louis returned the favor and blocked Mike from getting the money he needs to fight Harvey in court.

He played dirty because hey that how Mike treated him! Louis went on tell him they were done. It was Mike that ended their friendship the moment he used Sheila fully knowing how much she means to Louis.

Louis had suffered for his earlier setback with Harvey. Harvey nearly ripped into him when he found out the other man failed. So with Louis fixing his mistake – Donna told him to tell Louis he did a good job. It’s the least Louis deserves.

A lot of friendships have been thrown by the waste side lately. And Mike most of all seems to be the main perpetrator. Donna is upset with him and Louis was crushed by him. Then there’s Rachel. She wants to support Mike but she had to point out to him all the people he was hurting by his actions.

Mike did find funding he needed and for once he manned up and went to Louis to apologize personally rather than just a buy an expensive gift and praying that settles things (like he did with Donna). And Louis was suspicious. He wanted to know why Mike is saying he wishes they could still be friend when he heard the other part to Mike’s news.

Mike had gotten his funding after Louis gave him the idea for it. Louis told him that people with grudges are always ready to pay in kind so that’s what Mike did to gain his funding. He went to an enemy of Harvey’s.

Although Mike wasn’t going to tell Harvey this. He didn’t want to rub salt in Louis wounds so Louis did it himself. Harvey came to him saying “good job” and Louis made him eat those words. He wanted the punishment, I guess!

Harvey went to Mike. He wanted to warn him about his newest investor and Mike couldn’t deal with his sudden concern. It’s not like he can turn to anyone else with Harvey outmaneuvering at every option so if he has to deal with the devil then it is really Harvey’s own fault.

Mike made a deal with someone he barely knows and while he’s turning into a person that his own friends don’t like – Rachel is receiving inappropriate offers from her ex. So will she be the next person to walk away from Mike?