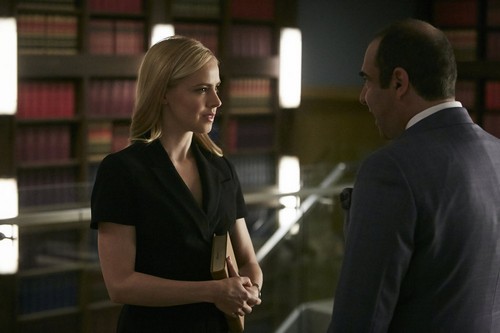 SUITS returns to the USA network tonight with an all new episode called, “Litt The Hell Up.” On this evening’s episode, Harvey tries to end the takeover when Sean Cahill brings Pearson Specter client Logan Sanders to the SEC for questioning.

On the last episode Rachel became increasingly anxious about work, school, and the growing attraction between herself and Pearson Specter client Logan Sanders. Meanwhile, Louis helped Donna prepared for a major role while she encouraged him to face his fear. Harvey and Mike agreed to a ceasefire, but Sam accused him of collusion and Mike learned how ruthless his new partner could be. Did you watch the last episode? If you missed it we have a full and detailed recap, right here for you.

On tonight’s episode Harvey tries to end the takeover when Sean Cahill brings Pearson Specter client Logan Sanders to the SEC for questioning. Elsewhere, Louis finds a way to make a name for himself when Mike insists on playing hardball.

The SEC is coming after Harvey and Mike. It seems Sean followed up on his threat from last week and reported Mike and Harvey for collusion. However Mike didn’t know that when he was dragged into Sidewell’s office so he thought his boss had found about his real secret with Charles Forstman.

Mike almost risked his job by being too jumpy during their meeting. It made his boss think he had something to hide. Luckily, Mike was able to quickly think on his feet – he told Sidwell that Rachel was in the hospital and that Harvey just happened to be there as well. In other words he continues to dupe poor Sidwell out of millions of dollars.

And while he’s scheming – Harvey is forced to deal with Sean heads on. The SEC dragged Logan into their offices for questioning. But really it was all a ruse. Sean merely wanted to catch Harvey off his guard and he failed because Harvey didn’t get where he was by panicking under pressure. No, that’s more Louis (who’s still trying to win back Harvey’s respect using this time a mug). Harvey managed to get his client released, but Logan is starting to wonder about the stock Harvey recently acquired. Harvey had to assure him he wasn’t doing anything underhanded.

Though they do have a problem with the SEC at the moment. Therefore he told Logan how they can clear up any residual suspicion. All Logan had to do was meet Mike for a sit-down. Yet that’s never going to happen with Logan pursuing Rachel. So Logan told Harvey he wasn’t going to do it and Harvey chose to go behind his back.

Harvey needed to close this case in a hurry. That’s why his first stop was to Mike and the second was to Rachel. Mike was only willing to do so if he got the chance to buy out the stock Logan had already bought. But Rachel gave him the leverage he needed over Logan. She told him how the board’s been pressuring him lately and he used that to strong arm his client.

Now Logan has no choice in the matter. He has to meet with Mike and after Rachel realized what a meeting like that would risk to her relationship – she manipulated Mike into asking for more from Logan.

Mike blinded-sided Logan with a new deal. He demanded that Harvey drop Logan as a client and when that didn’t work – he came to agreement with Logan to let Harvey choose who he wants to represent. And Harvey went with Mike which is something Logan wasn’t expecting seeing as he renegaded on the deal the second he appeared to be the loser out of it.

So Mike didn’t buy their shares. He walked away from the table telling Harvey he tried. Although they both know he really didn’t. He was toying with Logan in that meeting and Donna was the first to realize why. That maneuver was out of character for Mike so she knew who to blame.

She confronted Rachel over her double-dealing. The other woman should have realized by now not to mix business with her personal life. Because of what she did to that deal – Harvey ended up having to go over Mike’s head and deal directly with Forstman.

Harvey thought he could use the Wexler shares to get Forstman buyout Logan’s shares with Gillis but he was unaware that Louis had sold the shares less than an hour before his meeting. So he was caught off guard in front of one of his worst enemies.

When he returned to the office – he ripped into Louis. He blamed Louis for destroying any chance they had of winning. And Louis was crushed. He’s been trying to earn what little recognition he could from Harvey and when at this – it made him turn to Forstman.

He bought out Gillis’s shares by telling Forstman that Louis winning where Harvey failed would be the ultimate payback. But it was ploy. Harvey didn’t care who won the deal. As long as their firm came out on the winning side then he was happy. As he’s never been as happy with Louis before that when he heard about the deal.

Louis finally got respect, but he had to bend over backwards for it. Forstman wants his money to come through the Cayman Islands so that it could illegal get around taxes. Louis agreed to that deal knowing it was illegal and yet he didn’t care.

As for Mike, he turned down Forstman offer to work for him when he realized how much the other guy screwed him out of the deal he made with Louis and out of revenge – Forstman informed Sidwell that Mike was once willing to cut him out of the same deal. So Mike got fired.