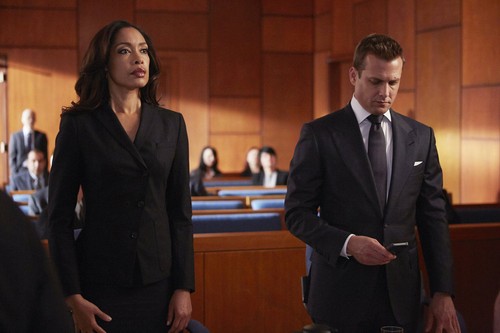 SUITS returns to the USA network tonight with the finale episode for it’s fourth season called, “This is Rome.” On this evening’s episode, Harvey and Jessica try to protect the firm from competitors; Louis tries to balance his personal and professional affairs.

On the last episode Sean began a round of depositions for the SEC investigation, endangering the employees. Did you watch the last episode? If you missed it we have a full and detailed recap, right here for you.

On tonight’s episode Harvey and Jessica take measures to protect the firm; Louis tries to get his affairs in order.

Tonight’s season finale of Suits begins with Harvey at the gym training in the boxing rink. Louis shows up and tells Harvey he needs his help, he needs clients. Harvey tells him that the bi-laws don’t allow it and Jessica won’t go for it. Louis pleads that he just needs three companies to get his business going, Harvey agrees to talk to Jessica.

Harvey arrives at the office, and confronts Jessica. She is adamant that Louis can’t have any of their clients, if she breaks the rules for him, then every lawyer that leaves will think they can take their clients with them. Harvey reminds Jessica that they owe Harvey after what he did, but Jessica says that she will pay him back by giving him a “glowing recommendation,” not any clients.

Michael and Rachel are cleaning out Harvey’s office for him. He left in such a hurry he didn’t take anything with him, and they don’t want the other partners to throw his stuff out. Donna lends them a hand.

Harvey meets up with Louis at a diner. He offers him a position of General Counsel at Proctor & Gamble. Louis isn’t excited though, because it is in Cincinnati. Harvey refuses the job, he says it is wrong. He plans to fight Jessica.

Jessica stops by Katrina’s office and warns her that she knows Katrina knows about what Louis did. Katrina scoffs that it was wrong to fire him, and fears that Jessica has come to fire her too. Jessica reveals she is not firing her, but offering her a “second chance” and hands her a case file.

Louis shows up at Jessica’s office and reveals that there is a loop-hole in the by-laws, and since she didn’t alert the clients that Louis was fired, they are fair game. Louis yells that he doesn’t need her “bullshit recommendation” he needs clients, and if she isn’t going to give them to him then he is going to take them. Katrina stops Louis at the office and reveals to him that Jessica had her contact all of his clients in person and tell them that he was fired, so it is over and he can’t contact them.

Harvey pays Mike a visit and tells him that Sterling Pharmaceuticals and Pfizer are merging, according to Law 10B-6 they can’t represent over 26% of the market, which means they might have to drop their client Versalife. Harvey tells Mike to find a way around that, Mike argues that it is impossible and has never been done and Harvey leaves.

Donna tries to talk to Harvey about Louis, she says that she is worried about him because he is in a “really bad place.” She says that she has a plan for them to help Harvey. Later Donna surprises Louis at the shooting range, she reveals that Harvey is going to get him another job in Boston where Sheila is. Louis agrees and tells Donna to have Harvey make the call.

Louis surprises Sheila and tells her that he is “here to take her back.” He professes his love to her and tells her that he wants to be with her. He announces that he quit his job and he is taking a job in Boston, Sheila can’t believe that he did all of that to be with her. Sheila isn’t buying it, it has been six months and geography was the least of her problems, she tells him to leave.

Mike rants to Donna that he doesn’t have anything on their Versalife problem. Harvey storms in and tells Donna to send his contact in Boston baseball tickets, cards, flowers, flowers for his dog, etc, and says it is an apology because Louis didn’t show up to his Boston interview.

Mike decides to pay Louis a visit at his house since he didn’t show up for his Boston interview, he brings him a box of his stuff from the office. Louis isn’t thrilled to see him, he rants that he doesn’t have Sheila or a job, and he just wants to be alone.

Mike decides to visit Rachel’s Dad and pitches Louis as a partner, he shows him Louis’s files and he agrees to meet with Louis. Mike heads home and tells Rachel that he got Louis an interview with her Dad. Rachel says that her Dad isn’t going to “give something for nothing,” and her Dad is going to expect something in return.

Louis heads in to his interview with Rachel’s Dad Robert. He says he doesn’t need another lawyer, he needs someone with balls. He tells Louis that if he successfully steals one of his clients from Jessica and Harvey then the job is his. Louis heads to Neubacher Capital, and runs in to Katrina. She stops him in the lobby and tells him that she knows he is trying to poach clients, she threatens that if he goes in to the meeting she will have to tell Jessica. Louis explain’s the deal Robert made him, Katrina says that she is going to be loyal to Louis and tells him that she will get him a client as long as he promises to take her with him to the new law firm.

Donna warns Harvey that she just got an email from Louis and he is going after Versalife. He rushes to Versalife and meets Louis in the lobby, Louis reveals that he already signed Versalife and Harvey is too late. He reveals that Versalife was thrilled to sign with them when he told them that Pearsen & Spector was going to drop them anyways. Harvey vows to Louis that he will get the client back.

Harvey heads back to the office and Jessica is furious. She is certain that Mike is the one who tipped Louis off about the merger and dropping Versalife. Harvey says that he knows Mike didn’t do it. Jessica points out that Louis is taking Versalife to Robert Zane, Mike’s future father-in-law. Harvey heads to Mike’s office and asks him what he has on Versalife. Mike confesses that he went to Robert Zane and asked him to give Louis a job. But, he never leaked to anyone that they were going to have to drop Versalife. Mike says he has a plan, but it involves Walter Gillis.

Harvey and Mike visit Walter Gillis, and ask him to buy a division of Versalife. They swear that the pills they are working on will be successful, but they need more money. Mike tells him that buying Versalife could help him save his son Phillip. Walter doesn’t want to hear it, Mike admits that he was wrong for losing Walter’s company and tells him that he will have to live with what he did for the rest of his life.

Mike pays Louis a visit, and reveals to him that they took Versalife back and Walter Gillis bought the company and drained their earnings to fit Rule 10B-6. Louis is devastated but he say that Mike is a “brilliant lawyer.” Mike gives him a peptalk about his credentials, and asks Louis to have a few drinks with him, Louis tells him that “now is not the time” and asks him to go.

Harvey pays Robert Zane a visit and confronts him about trying to poach Versalife from him through Louis. Harvey informs him that Louis is his family, and asks him to take Louis anyways and says that if he hires him Harvey will “owe him one.”

Jessica calls Mike in to her office and tells him he did a good job with Versalife. She acknowledges that she was wrong to assume that he leaked the information. Jessica tells him that they are “good” again. Jessica stops by Katrina’s office and tells her to resign for leaking info to Louis, or she can resign-the choice is her’s. Katrina agrees that she will be leaving her letter of resignation on her desk. Jessica informs her that they got Versalife back and there is no job for her at Robert Zane.

Louis confronts Jessica and warns her that he is going to “see her in handcuffs.” Jessica refuses to apologize for what she did and asks what he really wants. Louis says “Pearson-Specter-Litt.”