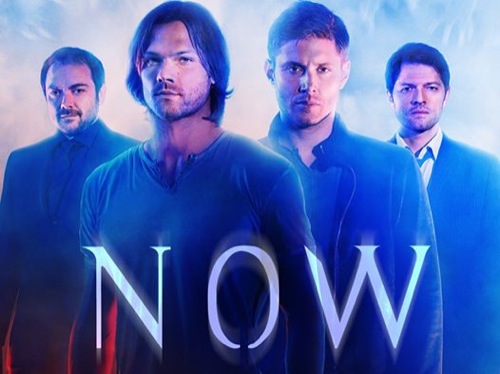 Supernatural returns tonight on the CW with an all new Tuesday October 14, season 10 episode 2 called “Reichenbach.” On tonight’s episode, Dean becomes more aggressive as a demon, and Crowley tells him it’s because the Mark of Cain needs to be fed. Meanwhile, Sam [Jared Padalecki] is captured by an angry man who blames Dean for his father’s death and wants revenge; and Hannah asks Metatron for help when Castiel’s grace continues to fade.

On the last episode Dean (Jensen Ackles) was a demon and running amuck with Crowley (Mark Sheppard) while Sam (Jared Padalecki) tried to figure out what happened to his brother. Meanwhile, Castiel (Misha Collins) was dealing with his diminishing grace.  Did you watch last week’s season 10 premiere episode? If you missed it we have a full and detailed recap right here for you.

On tonight’s episode Crowley (Mark Sheppard) notices Dean (Jensen Ackles) is becoming more and more aggressive. Dean tells him that’s the side effect of being a demon, but Crowley knows it’s something more – the Mark of Cain needs to be fed. Meanwhile, Sam (Jared Padalecki) is captured by Cole (guest star Travis Aaron Wade), an angry man who blames Dean for his father’s death years ago and wants revenge. Cole tortures Sam, hoping he’ll tell him where Dean is hiding. Hannah (guest star Erica Carroll) sees how weak Castiel (Misha Collins) is becoming as his grace continues to fade, so she makes a bold choice and asks Metatron (guest star Curtis Armstrong) for help.

Tonight’s season 10 episode 2 looks like it is going to be great and you won’t want to miss it, so be sure to tune in for our live coverage of CW’s Supernatural at 9:00 PM EST!

A small boy hears some fighting going on and finds his father dead downstairs, Dean walks in with a knife; having been the one to kill the boys father. The guy tells Sam this story and lets him know it’s the reason why Dean is going to die, the kidnapper asks where Dean is; Sam explains that Dean isn’t himself right now. the kidnapper reveals his name is Cole and says that every night he closes his eyes and only sees Dean. Cole begs Sam to help him, Sam tells Cole he is sorry and explains that whatever Dean did there was a reason for it. Cole mentions he was in Iraq and has seen a lot of bad things, he knows his monsters; Same explains the vampires and werewolves exist. Sam tells him to look in the bag, Cole tells Sam he’s a psycho and doesn’t believe him.

Dean is sitting at a strip club and is starting to harrass one of the girls; he then beats up a security guard at the club. Cole is beating up Sam demanding where Dean is, he breaks Sam’s arm. Sam tells him to shove it, Cole decides he’s going to now use a hammer on his knee, Cole gets a call and answers it; Sam realizes he dropped his keys and on it is a knife. Sam isn’t in the chair anymore when Cole comes in. Some kids insult Dean and he isn’t happy about it, Crowly comes out and says he wants to chat with him and his anger problems. Castiel is washing his hands and has a wound on his chest, Hannah comes over and heals it for him. Castiel gets a call from Sam, he mentions that Dean is a demon and Castiel is very angry; Sam explains the mark mest him up. Sam explains that this is something they must deal with fast, Castiel agrees to meet up. Hannah questions this, she thinks the Winchesters are a bad influence for him. Castiel explains they are the best men he’s known and are his friends, Castiel falls asleep on the wheel and crashes.

Crowly knows Dean feels very angry and knows the mark changed him completely, Crowly says that Dean needs to kill even if he doesn’t want to; the mark needs him to do it. Crowly knows that death is Dean’s drug and he will spend his whole life chasing it, Crowly says he wants him to kill for them; so that they can control his blood lust. Crowly gives Dean his target of a woman who cheated on her husband and Dean decides he’s going to do it. Castiel and Hannah are saved by a person, who lets them stay at her place while she goes out.

Dean arrives to the persons house and pulls out his blade, he sees the ex-husband sitting outside and goes into his car; Lester mentions that his contact told him this was happening and wanted to make sure it gets done right. Dean tells Lester he’s a loser and the woman he married was far too pretty for him, Dean knows Lester was messing around first; Lester mentions it’s different for guys and Dean punches him in the face. Dean goes ahead and stabs Lester in the car.

Sam is at the strip club and confirms that Dean was there, he tells the guy to call him if they see him again; Cole is following Sam and watching him get closer to Dean.

Castiel wakes up next to a little girl watching cartoons, she says hello and he says hi; she asks if he had a good dream. Though Castiel says he can’t dream, the girl tells him about her snot rocket she dreamed about. The woman who helped them tells Hannah they are good to go. Crowly is sitting in a meeting and gets a call, Dean says it went very well and it feels amazing. Dean says he killed Lester, Crowly is really shocked and now he can’t get a soul. Dean tells him that is all done, Dean shoves Crowly to the floor, he tells Dean to big a damn side of what he is; Dean tells him to go ahead and make a move to see how it ends. Dean says he is not taking orders and will go out on his on till he needs to kill, Crowly tells him it’s over and mentions the crazy ones are not relationship material. Crowly says they are done and it’s all Dean.

Crowly goes to Sam and tells him Dean can’t be controlled at all.

Castiel is sitting in a car at the park, he wakes up and some woman tells him Hannah is up in heaven right now; she goes to see Metatron and he mentions knowing she’d come back. Hannah asks about Castiel, wondering if there is any of his grace left and that she wants it. Metatron asks if he could be taken out if he helps, he then says he’s had a lot of time to think and decided screw Earth; he will give her Castiel’s grace though he will go away to another galaxy. Castiel tells Hannah that Metatron is lying, he’s made deals out of desperation and they always end horribly. Castiel says that it’s his life and he makes the choice of whether he lives or dies. Metatron says he’s a great liar, but there is quite a bit of Castiel’s grace left and it can be his. Castiel tells him to keep it, he has made peace with his fate; Castiel admits he loves knowing Metatron is rotting in a cell. Metatron says when he gets free, everybody will die; Metatron tells him that he should have killed him.

Dean is playing the piano a bit and then cuts his own hand with the knife; Sam walks in to see Dean. Dean tells Sam that he should have just let go, Sam says that his pal Crowly sold him out; Dean says it sounds like him. Sam says they can cure demons, Dean tells Sam he might not want to be cured; Sam tells him it doesn’t matter because whatever went down and happened they will fix it. Dean says he’s doing his best to not kill him and that he should take this chance to back off, Dean tells him he’s not walking out the door with him. Sam says he won’t kill him, he is his brother and will take him home. Dean laughs at him and doesn’t take it seroius, Sam pulls out hand cuffs to put on Dean; a smoke grenade is thrown in and Sam runs out choking. Cole is there and he knocks Sam out, Dean sees him and doesn’t know him. Cole says they talked on the phone, having followed Sam to find him; Dean says it’s great to meet a groupie. Cole mentions how Dean killed his father, Dean says he wasn’t the first or last. Cole says he saw him how he let him live, he spent half his life training for the moment and played it out a lot in his mind. Dean tells him to take a shot, but Cole wants to stab him. Dean tells him that maybe he isn’t as good as he thinks, Cole cut Dean’s face. Cole sees him heal and Dean tells him he is a demon, Dean is beating the hell out of Cole and places a knife at his throat. Dean lets him go and Sam throws holy water on Dean and cuffs him.

Crowly comes to Sam and he decides to leave the blade with him, Crowly doesn’t want Dean to get his hands on the precious anymore; Sam tells Crowly he’ll kill him the next time. Crowly tells him to stop being such a tease, an injured Cole goes looking for a book on demons. Crowly sits at a bar listening to sad music and looking at pictures of him and Dean having a good time. Sam is driving with Dean and Dean comments that it’s just a car; Sam says he’s surely gone dark because of that. Sam saw Dean let the guy live, Dean says it wasn’t mercy but to make the guy feel even worse that he couldn’t beat his fathers killer. Dean says he won’t give Sam any mercy either.