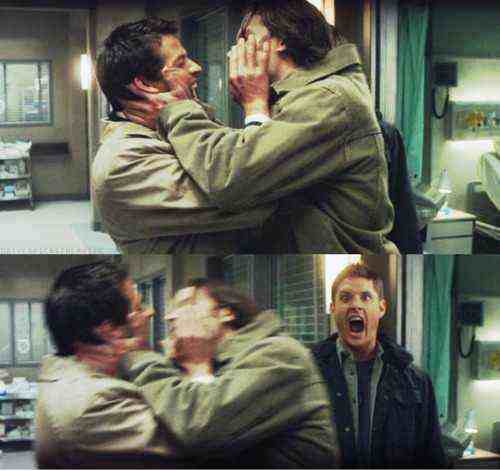 Supernatural returns tonight on the CW with an all new Tuesday October 7, season 10 premiere episode called “Black.” On tonight’s episode, Dean (Jensen Ackles) is a demon and running amuck with Crowley (Mark Sheppard) while Sam (Jared Padalecki) tries to figure out what happened to his brother.

On the last season 9 finale, Dean (Jensen Ackles) felt the effects of the First Blade, and Metatron (guest star Curtis Armstrong) made his move against humanity. Meanwhile, Sam (Jared Padalecki), Dean and Castiel (Misha Collins) faced shocking consequences when taking the fight to Metatron (guest star Curtis Armstrong). Did you watch last week’s episode? If you missed it we have a full and detailed recap right here for you.

On tonight’s episode Dean (Jensen Ackles) is a demon and running amuck with Crowley (Mark Sheppard) while Sam (Jared Padalecki) tries to figure out what happened to his brother. Meanwhile, Castiel (Misha Collins) is dealing with his diminishing grace.

Tonight’s season 10 premiere episode looks like it is going to be great and you won’t want to miss it, so be sure to tune in for our live coverage of CW’s Supernatural at 9:00 PM EST!

We now see a demon chained up against some sort pole telling Sam that everything is all gone now, Sam demands to know where Crowly is and she refuses to tell him so he stabs her right in the guy asking once again. Sam wants to know where his brother is and starts cutting her more, he demands her to make a call; Sam once again yells for his brother.

Sam is study a lot on demon possession and is now cleaning his face, Sam is reading up on some weather reports and then goes back to the room with a not saying “Sammy Let me Go”. Sam finds something that interests him and he right away texts Castiel, Sam tells him he might have found something; Castiel is pretty sick. Sam mentions that a man murdered a week ago was found, the guy has been missing for three years after killing his family; Sam believes he was possessed. Castiel is coughing a lot, Sam thinks he might have jumped the gun though; Castiel says he can help and Sam mentions that everything is fine and he should worry about himself. Castiel asks how he is and Sam says he’s alright but tired, he wants to get Dean back for sure; Castiel says he misses him.

We now see Dean and he’s singing karioke at some bar, nobody is liking his singing but he keeps doing it. Now Dea nwakes up in bed with some woman who was on a break, she gets out of the bed and gets dress; Crowly walks in and can’t believe what he’s seeing. He’s shocked Dean did that in his bed, Crowly rells Dean to put on some pants.

Dean is now playing foosball with Crowly for beer, they lose and Dean goes ahead and punches some guy in the face several times for harrassing some woman.

Castiel gets a knock at his door and goes to answer it, Hannah is there and it’s very awkward since Castiel didn’t know he was naked; the angels have no leader and are governoring themselves. Castiel mentions he would have come sooner, though Hannah says that heaven needs his help; most of the angels have returned to heaven. Some have refused to go back, they even killed a fellow angel; Castiel says he’ll go look for them.

Sam is now investigating a murder which apparently was more self defense, a surveillance footage showed much more happened. We now see Dean who calls out a demon to fight; he pulls out his knife and goes to kill him. In the footage Sam sees Dean in it killing a guy, Sam is shocked to see it and asks to take another good look at it all; noticing that Dean is now a demon.

Castiel and Hannah get to a location, she notices that Castiel looks very ill and she knows he’s dying with his grace getting weaker. Castiel tells her she’s a great solider and that Metatron would not have been defeated without her, Castiel says he can’t kill another angel for more grace. Sam talks to the employee at the store who saw the killing, the guy hands him the dead guys phone; Sam callls a number that is Crowly. Crowly says hello and Sam right away tells him his brother is dead, Crowly explains that Dean is alive with his soul and it’s all him; Sam mentions he will save his brother or die trying. Crowly mentions Dean is his best friend, Sam says he’s going to find him and kill him.

Castiel and Hannah arrive at some sort of stream where a man is fishing, Castiel asks the man Daniel why he’s fishing; he mentions he wants trout. Daniel mentions that nobody would have been hurt if the angel left him alone, Hannah tells him that they all serve heavens command; Daniel says that was before the fall. Daniel says he was dropped unwillingly and this land turns out to be something he likes much more, he knows it’s a life worth fighting for. Hannah points a blade at Daniel, Castiel tells her they can convince him; they don’t have to kill anyone. Crowly mentions to Dean that he threw demons at him to help the mark stay calm, Crowly then says they have to plan out their future business; Dean says that he likes everything where he is at now.

Corlwy tells Dean that they can rule together creating the perfect hell, they are not ending the part but moving it; he also mentions that he spoke to Sam earlier. Crowly says that Sam has been tracking them, Crowly realizes that maybe Sam traced the call; he could be here by morning. Sam is driving and notices a car stop beihind him, out comes a guy asking to help; Sam says he thinks so because his car just died on him. The guy asks if he can give him a hand, Same says sure and thanks him; the guy knocks Sam out and captures him.

Dean is drinking a lot and singing more, Dean wakes up in the night and is woken up by Annemarie; he tells her they should go of somewhere. She was really impressed with how he beat up Matt at first, but when he kept punching the guy over and over she noticed something was wrong with Dean. Annemarie knows Dean isn’t a good guy.

Castiel is outside camping out with Daniel and Hannah, Daniel says he wants to be free and really doesn’t like being told what to do; Dia now appears and Daniel tells her to hide the blade; Hannah tells Dia to be free and the two fight; Daniel tells them to stop but the two girls fight. Daniel gets a knife and Castiel stabs him and Dia cuts his gut and runs off; Castiel is really injured.

Sam is now being tied to a chair with a sack over his head, it’s taken off and the guy who captured him knows who he is and mentions that him and Dean go way back. He’s a hunter of some sort, he wants to hunt down and kill Dean; Same tells him to not do that. Sam tells him to stop it as soon as he can, his brother is now a monster; the guy says that he is now a monster himself.

Hannah tells Castiel that they have to report what has happened; Castiel tells her they just wanted to be left alone. Hannah says without rules there is chaos, Castiel says that he has probably been on Earth for so long because not all bad comes from chaos. Dean gets a call from Sam, he picks up and says hello; the guy announces himself that his brother Sam isn’t dead until Dean shows up to save him. The guy punches Sam in the face, Dean says that he won’t meet up with him but surely will kill him and that he’s going to now kill Sam.