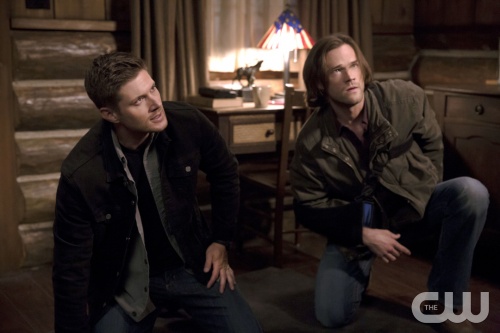 On the last episode Sam (Jared Padalecki) continued his efforts to save Dean (Jensen Ackles) from the Mark of Cain. Crowley (Mark Sheppard) realized Dean’s demonic antics are starting to cause problems for him in Hell so he searched out an unlikely ally. Did you watch the last episode? If you missed it we have a full and detailed recap right here for you.

Tonight’s season 10 episode 4 looks like it is going to be great and you won’t want to miss it, so be sure to tune in for our live coverage of CW’s Supernatural at 9:00 PM EST!

We start off at a bar filled with bikers, in walks a woman who takes a man outside and then slashes his throat with her claws; then walking off leaving him for dead. We now see Dean and Sam sitting in lawn chairs, Dean asks how Sam sprained his elbow; Sam says it was a demon and Dean asks if it came with a slice of cry baby pie on the side. Sam asks how Dean is doing, Dean says he is golden and is happy to have a little time for them to just chill together. Dean figures something unusual is going on around the town, Sam says they should get someone else to do it; though Dean offers that they should just get in quick and out. Dean says he really needs to work, it’s important to him; Sam tells him if things go wrong than he has to give him a heads up quickly.

Sam and Dean go to the bar where the man was killed, they ask a man about what went down; the guy mentions that his friend went out back and they found him torn up. The friend mentions there might have been a girl, but she’s fine; Dean and Sam say they are not real cops. The guy then tells them that he was taking a run past a farm last night and saw the girl after the attack, she was covered in blood watching him but she just disappeared. Sam and Dean go out to find the woman, they find some dead animals and claw marks on the walls inside of the barn. They find a girl and point their guns at her, she smells them and makes a run; though Sam grabs her and the find out it’s Kate.

Kate thought they’d just let her go, Dean says they know how she went Wolverine on a couple of guys and Sam asks her what she has done. Kate mentions that her hunger has been very hard to deal with, Dean says it’s wonderful how she breaks hearts and eats them. Kate tells them to do whatever they want to right now, Dean points a gun to her head; though Sam feels Dean isn’t ready for this. Sam finds out that there is another victim found, Kate cuts the rope and runs out of the barn from them; Sam believes she’s taking the credit for it all but isn’t a true killer. Dean took her phone and found out that she last clled a motel, Dean mentions this is about Lester; he thinks they need to talk about that. Sam says there is nothing to talk about, Dean then asks why he made him sell his soul; Sam says Dean kill him but Dean tells him he started it all.

Sam mentions he went dark just to find him; the two just leave it as is. Sam and Dean find Kate at a motel, they start to folow her and see her run into a forest after a jogger; the pull their guns on her. The girl turns around and Sam asks for Kate; they wonder why they followed her and Dean walks over to test her. Dean gets close and the girl unleashes her fangs, Kate comes out and stops her from killing the girl who is apparently her sister.

Dean points a gun at Kate asking why her sister is a werewolf, Kate mentions she made her sister into one; Sam asks if her sister is the one killing people. Dean demands her for the truth, they decide to go to a diner to talk. Kate has a piece of silver on her in case she ever goes crazy, she has never even eaten a human heart; she eats what she can find. Dean says it’s great that she has had such a good influence on her sister Sasha, Kate says she was really confused after school and didn’t know what to do so she went somewhere safe. Kate kept thinking about her family and wondering if they’d come back to kill her; Kate left her family and made no contact with them at all. But her sister was in a bad car accident and was probably not going to make it and because of that she went to say goodbye; but then it hit her to make her sister a werewolf and that might save her. Kate told her sister straight up what they were after saving her and taking her from the hospital, Kate went home one day and noticed that Tasha killed a human.

Kate knew that she was losing her slowly, she pretended to be the real killer to save her; though plans to clean up her own mess. Sam asks why Kate thinks she’ll listen now, Kate decides they will go into the woods to find a way to control this; Kate won’t abandon her and needs to make it right. If things don’t go well then she’ll take care of it; Dean says they can cure them both. Sam wonders why Dean lied about a cure, Dean says they are both monsters and they need to finish this soon by killing them. Dean asks what his plan is then, the two drive out with Kate asleep in the car; Sam lied about Lester.

Sam admits there were other humans who he did wrong, though after watching Dean dying and putting his dead body on the bed to then find him gone was too much. Dean says it’s embarrassing that the note he wrote, Crowly and everything he did; it hated all of it. Dean thanks Sam, Sam tells him he doesn’t have to say that to him. Dean wakes up Kate and she says they are getting close; Kate explains that this cabin is one they went to when they were young and it’s where they go if things were to ever get bad. Kate decides she’ll go in first to explain it all, though Dean cuffs her to the steering wheel and she can’t believe she trusted them; Dean says she killed people and there is no saving her from what she has done. Kate keeps begging them not to kill her sister, Dean and Sam start making their way into the cabin. Sam opens a door and finds Tasha holding a doll, she says she can’t believe her sister betrayed her; Tasha knows she won’t shoot him. A man is already holding Dean at gun point.

Tasha tells Sam to drop the gun or Dean loses his brains, Sam listens and drops his gun; Kate walks in and asks who these two guys are. Tasha tells the mthe men are Brandon and Travis; she turned them and they are their new family. Kate tells Tasha they can talk about this, Tasha says Kate can walk away or join her pack by proving she has what it takes to eat their hearts out. Sam tells Kate she doesn’t have to do this, Kate tells her sister no and Tasha tells the guys to have fun with them as they like. Kate tells Tasha she can help her get better, Tasha says she always is; she loves feeling so strong right now. Tasha says she used to be weak, but now she isn’t like that anymore at all; she doesn’t want to submit to anyone anymore. Tasha tells Kate they can do it together, Sam and Dean both stab the two men with ease; killing them instantly. Kate tells Tasha she loves her and then Kate goes ahead and stabs Tasha; then tells her sister sorry. Sam and Dean find Tasha’s body on the ground and Kate is gone.

Dean and Sam are now driving, Dean asks if they should go after her; Sam tells him he doesn’t know. Though Dean mentions things went really well in the end, Sam mentions that they should still be resting and deal with all they have been through; thinking they have jumped in too fast. Sam asks if Dean wants to talk about the mark and being a demon, Dean knows what happened and he reallly wants to get back to doing good; not just stewing in his own crap. Dean gets a call and tells Kate she is good at get aways, Sam thanks Kate for what she did; Kate mentions that Tasha was no longer her sister. Dean says that if she keeps herself all clean they can meet again, Dean says they’ll see her around and she says she hopes that they never do. Dean confesses he might not be ready to hunt, but he is so sick and tired of doing the wrong things.