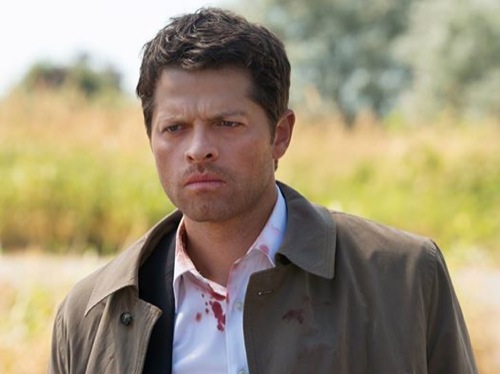 Supernatural continues tonight on the CW with an all new Tuesday October 21, season 10 episode 3 called “Soul Survivor.” On tonight’s episode, Sam [Jared Padalecki] tries to release Dean from the Mark of Cain. Meanwhile, Crowley seeks the help of an unlikely ally after encountering problems due to Dean’s [Jensen Ackles] behavior.

On the last episode Crowley (Mark Sheppard) noticed Dean (Jensen Ackles) was becoming more and more aggressive. Dean told him that’s the side effect of being a demon, but Crowley knew it’s something more – the Mark of Cain needed to be fed. Meanwhile, Sam (Jared Padalecki) was captured by Cole (guest star Travis Aaron Wade), an angry man who blamed Dean for his father’s death years ago and wanted revenge. Cole tortured Sam, hoping he’ll tell him where Dean was hiding. Hannah (guest star Erica Carroll) saw how weak Castiel (Misha Collins) was becoming as his grace continued to fade, so she made a bold choice and asked Metatron (guest star Curtis Armstrong) for help. Did you watch the last episode? If you missed it we have a full and detailed recap right here for you.

On tonight’s episode Sam (Jared Padalecki) continues his efforts to save Dean (Jensen Ackles) from the Mark of Cain. Crowley (Mark Sheppard) realizes Dean’s demonic antics are starting to cause problems for him in Hell so he searches out an unlikely ally.

Tonight’s season 10 episode 3 looks like it is going to be great and you won’t want to miss it, so be sure to tune in for our live coverage of CW’s Supernatural at 9:00 PM EST!

The episode starts off with a priest chanting in front of Sam; Sam is dressed in a lab coat and takes some human blood. He then gets back to the hide out to give Dean some human blood, Dean tells Sam that he might not want to be fixed and asks why he cares; Sam takes the needle and goes stabs it right into Dean’s wrist injecting it all. Sam tells Dean to sit back and stop going so crazy, Dean is reacting very horribly to the human blood though. Castiel and Hannah are on the road together, she asks him how he’s holding up; though Castiel answers with a fine. Hannah doesn’t believe he’s fine, Castiel says it’s a human thing where you say it even if you don’t feel it; she has no idea why Sam would ask him to drive out in his condition. Castiel says he’d never have to ask, he’s willing to do whatever he can for Dean. Hannah says she worries about him.

Sam is injecting more and more human blood into Dean; Dean says that his could have killed him though Sam mentions he’d simply just be trying to mess with him. Dean tells Sam hunters and men of letters are all crap, Same tells him he isn’t even Dean right now; Dean tells Sam that he is in the right mind. Dean says that he isn’t any different to what Sam has turned into.

We get a flash back of Sam at a bar and talks to a man who’s wife cheated on him, the man mentions wanting to take revenge on her though isn’t sure it will happen; Sam tells him it can be possible to have his revenge. Sam makes the man go out and summon a demon, a demon arrives and he asks for her to kills his wife for his soul. Sam captured the demon who made the deal, she refused to tell him anything so Sam went ahead with torturing her. Dean mentions killing the man Sam had sell his soul, Dean knows that he might be worse than him for taking a guy at his lowest; which took his life. Sam stabs Dean again in the neck, Dean tells Sam they both know what he’ll have to do if the human blood doesn’t save him.

Crowly is sitting on his throne and is signing some papers, an informant tells him about Castiel losing strength and believes it’s the best time to eliminate him; Crowly tells him that they can follow him but there is no need to attack. Crowly has a flash back of being with Dean and sit there spacing out in his throne, he is hearing about people who weren’t so happy about him being with Dean a lot; one of his lackies tells him he can be his new wingman. Crowly snaps his fingers and turns the man to dust, asking if anyone else wants to join him.

Hannah and Castiel are lost by now, she tells Castiel to maybe go ahead and get some grace; Castiel says they will not kill another angel and Metatron will not be leaving his cell. Castiel gets a call from Sam and hears how Dean is in more pain than anything from the human blood, Sam says he might be killing him; Castiel tells him he can’t stop since the ritual of purified blood is all he knows. Dean is knocked out and Sam can see that this is having a very negative effect on him, but knows he has to keep going; Dean tells him to just give up. Dean tells Sam that he never had a brother, only an excuse for not manning up; Sam tells Dean he can’t quit since this family is all they have. Sam asks if he’d tell his father that, Dean tells him it was nothing but a man who raised them to fight a losing battle; Sam tells him he’s lifting his lame ass out of the fire this time around.

Crowly sentences a demon to death for treason, he asks if anyone else wants to betray him; next up is some stranger though some demon tells him to stop it since all they did for him they have gotten nothing at all. The demon tells Crowly that he left to get high off human blood and hang out with Dean; the demon goes ahead and sets himself on fire not wanting to live in the hell Crowly made. Crowly says he did not see that coming, but finds it amusing.

Hannah and Castiel are getting gas, Castiel tells Hannah to be safe and that this missoin is everything; getting to Dean is very important to him and wants both of them to have total focus on it. Castiel tells Hannah to give up on emotions and that the temptation will not lead to anything good; he wants her to keep their priorities clear. Hannah says hello when she walks in and notices a coffee mug spilt on the desk, the person inside is missing his eyes. Castiel walks inside and notices Adina followed them. Adina knocks Castiel down and he tells her to kill him but let Hannah go, Adina wants to kill Castiel very slowly and make sure it hurts. Sam walks into what was Dean’s room, he notices some pictures of them together and it only assures him that he must do all he can to save his brother.

Crowly sees Castiel knocked out on the ground and is amazed to see him all beat up, Sam goes back to find Dean but notices he’s missing from the chair.

Adina is getting ready to kill Hannah, Crowly comes in and tells her that will do; he cuts her throat and takes her grace. Sam is sneaking around, while Dean is trying to find Sam inside the bunker; Sam hears a sound and jumps. He moves on and Dean takes a hammer and shouts for Sammy to come out and play. Crowly goes ahead and gives Castiel his grace since he is useless to him dead, Castiel is now fine and Crowly tells him he owes him; Crowly tells Castiel to fix Dean as a demon since it’s really doing him more harm than anything else. Dean keeps searching for Sam and notices a door which he kicks open, Sam goes and locks the place down; Dean says he doesn’t want to leave till he finds Sam anyways.

Dean goes ahead and turns all the lights on, Sam goes ahead and locks the door; he tells Dean that he is in there still. Dean starts breaking down the door with a hammer, Sam tells him if he comes out then he’ll have no choice but to use the knife; Dean says he’s lucky knowing there is enough demon in him to kill Sam. Sam ran away again and Dean keeps calling for him to come out and finish their game. Sam has the knife against Dean’s neck now, Dean tells him to do it already; Sam puts the knife down and Castiel comes in and holds Dean down. They now continue with the blood treatment, Dean wakes up and he wonders why they look worried. Sam throws some holy water at Dean and it doesn’t burn him, Sam welcomes him back.

Sam says that Dean is hungry again and is going to go pick him up some food, Castiel says he’ll keep an eye on him but Dean isn’t a demon anymore but he still has the mark of Kane on him. Sam says he is beat and really needs to go take a break; Dean is in his room looking at the pictures of him and Sam together. Castiel walks in and tells him he looks terrible, Dean thanks him for coming in and helping him. Castiel tells Dean that what he was isn’t real and that trying to kill him with a hammer isn’t that big of a deal; Dean says he is glad Castiel is there. Castiel tells him to take some time off. We now see some woman sitting in a room with two dead bodies in the ceiling.