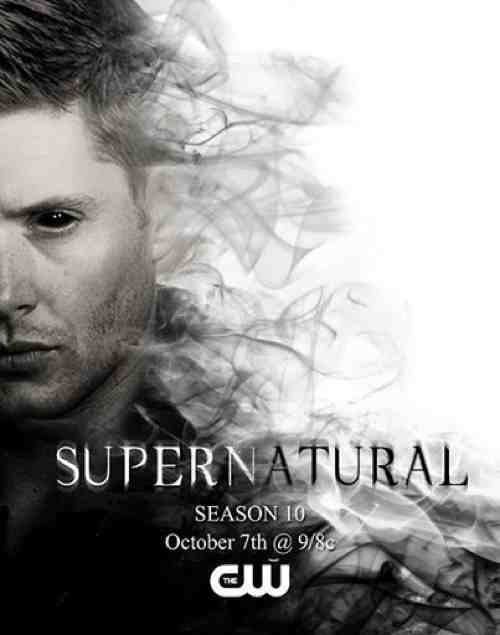 SUPERNATURAL returns tonight on the CW with an all new Monday October 6, special episode called “Retrospective Special.” On tonight’s episode highlights from the show’s first nine seasons be showcased.

On the season 9 finale, Dean (Jensen Ackles) felt the effects of the First Blade, and Metatron (guest star Curtis Armstrong) made his move against humanity. Meanwhile, Sam (Jared Padalecki), Dean and Castiel (Misha Collins) faced shocking consequences when taking the fight to Metatron. Did you watch last week’s episode? If you missed it we have a full and detailed recap right here for you.

On tonight’s episode highlights from the show’s first nine seasons are shown. This includes interviews with Jared Padalecki, Jensen Ackles, Misha Collins and Mark Sheppard, who share their favorite memories, monsters, angels and demons from the show. Also: a preview of Season 10.

Tonight’s special episode looks like it is going to be great and you won’t want to miss it, so be sure to tune in for our live coverage of CW’s Supernatural at 9:00 PM EST! While you wait for our recap hit the comments and let us know what you thought of the last season finale?

It’s the preview for Season 10 of Supernatural. Jared and Jensen say that the show is serious on paper but fun to make. We see Sam and Dean as young guys back in Season one talking about the family business. Eric Kripke says he set out to make a horror show. Jared says it’s two brothers in a muscle car chasing a different monster each week. Jensen says they were hunting urban legends and it was pretty simple. Monsters were the original focus but then that changed.

Then faith came into it at the tent revival and we saw the bond between the brothers that transcended life and death. Then it became about religion and fate. Kripke says they saw the show could be about a lot more than monsters and they learned from that episode. It became a template for what they could do. The story then became more about the brothers. Kripke says it’s about family being your greatest strength and weakness.

We see John, their dad, saying killing demons come first. Dean is the protector and Sam has given his life a couple of times. Dean gives up his soul to get Sam back. Jensen says they went to hell and back on the show and the ends of the earth. Sam says there is nothing he wouldn’t do for Dean. Mark Sheppard says you care about the Winchesters and that’s why you watch. We see Sam walk in on Dean getting busy and grossed out.

Jeremy Carver says they like to make the dialog like what real brothers would say to each other. We get a few samples of it. We see them saying the same things. Jeremy says if you don’t sell their relationship, there is no show. Kripke says the episodes he hated are the ones he thinks about more. We see Wendigo as one he doesn’t like. He says there were no twists and turns and they didn’t have the money to do a cool monster.

Kripke said that episode sucks. Bob Singer says the bugs episode sucked too because they’re not scary. Kripke says it was one bad scene after another. Jared says not all were fake and they made them film with real bees and that the bee wrangler told them the bees were docile and they should be fine. Kripke says they all got sting to hell but the bees didn’t show up on film and they had to CGI them anyway.

The first few seasons were Sam and Dean chasing the demon that killed their mom then got more complex. Dean goes to hell, Sam goes to hell, they tangle with Lucifer, they each go to purgatory, there’s a celestial holy war, they go to heaven and Dean becomes a demon. Kripke says the mythology really took off in season four when they introduced angels. We see Castiel getting shot up as he walks to them. They said it was the most bad ass intro and he was an instant hit.

Demons have always been on the show but there is only one king. We see him kissing the old guy on King of the Crossroads. Jeremy says Crowley is delicious and you love to hate him but sort of love to love him as well because he’s so enjoyable. Kripke says he says the most awful stuff- he calls Sam Moose all the time. Then Dean calls and the caller ID says “not Moose.”

Then we see Sam turning him more human. We see Crowley talking about HBO to Moose and about Girls and Hannah needing to be loved. He cries and says he deserves to be loved. Mark says it’s a great job and Misha says they love the king of hell. Supernatural was born as a horror series but grew to be so much more without losing the ability to scare and shock.

Kripke says The Kids Are Alright is one of the scariest to him with the demon kids eating the mom’s energy. Jensen says scary kids are really scary. Jeremy says he liked The Benders. We see the crazy humans. Misha says he’s scared of horror movies and when he watches two episodes in a row he gets nightmares. But Supernatural is also very funny sometimes.

Kripke says Hollywood Babylon was their first stab at a funny episode. We see Gary Cole playing the studio executive giving stupid notes. Kripke says all those notes are real ones they got from the CW. In Mystery Spot, Sam relives the same day over and over like Groundhog Day -a day that ends with Dean’s death. Kripke says it was fun to kill him in a bunch of different ways. He says the best one was the funny tasting tacos.

Jensen says he thought Yellow Fever was very comedic. Dean got infected by a virus that caused fear. We see him screaming like a little princess. We see the scene with the snake and Jared says he was terrified of it for real. Jared says to be able to have fun on the show has kept them going so long. We see Sam saying he lost his shoe – that was from when he had the horrible luck – great episode!

There are some other great characters over the years. Robert Singer says his favorite demon is the yellow eyed demon. We see the line about the chewy taste of their own intestines. Agh! Jeremy says he liked Meg who says her meat suit gets dewy. Misha says she was a good kisser – we see Cas saying he learned it from the pizza man.

Mark loves Abadon and says she was fantastic. Next, the angels. They say they decided to make them dicks. Mark says he can’t stand angels. Misha says he likes Cas best, of course. He says Lucifer was good. We see him getting called a great big bag of dicks. Bobby Singer was extremely popular as their surrogate father.

The producer they named him after thought it was obnoxious but they did it either. We see Bobby’s demise. Then there’s the car. It’s the longest running supporting character. The 67 Impala was almost something else. Kripke says his neighbor pimps cars and he said he was interested in a Mustang but his neighbor said that was a p*&^y car. Kripke says the car is awesome and the only show associated with a really cool car right now.