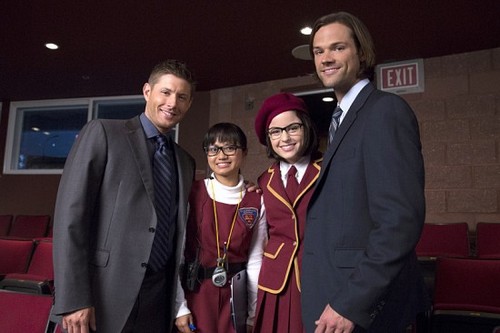 Supernatural continues tonight on the CW with an all new Tuesday November 11, season 10 episode 5 called “Fan Fiction.” On tonight’s episode, Sam [Jared Padalecki] and Dean [Jensen Ackles] investigate the disappearance of a teacher and are stunned to learn that the victim’s school is putting on a musical based on their lives. The 200th episode of the series.

On the last episode a recent string of werewolf attacks pointed to a surprising culprit – Kate (guest star Britni Sheridan), the werewolf Sam (Jared Padalecki) and Dean (Jensen Ackles) let live.. Did you watch the last episode? If you missed it we have a full and detailed recap right here for you.

On tonight’s episode as per the CW synopsis, “when Sam (Jared Padalecki) and Dean (Jensen Ackles) investigate the disappearance of a teacher, they are stunned to see the school is putting on a musical based on their lives. Familiar faces abound in this milestone episode.”

Tonight’s season 10 episode 5 looks like it is going to be great and you won’t want to miss it, so be sure to tune in for our live coverage of CW’s Supernatural at 9:00 PM EST!

The episode starts off with two people acting as the Winchesters, the scene is the school doing a musical/play of the boy lives. The girls start getting into a fight. Their drama teacher leaves and is talking to a friend on the phone, she goes on about how horrible her students are and the crap play they are putting on. Out of nowhere branches grab her and pull her into the forest. Dean is cleaning up his beloved car, Sam comes out of the motel room and asks him how long he’s been up. Dean says he’s feeling pretty good and back to normal now; also talks about finding a case about a school teacher. They make their way to the school and they decide to go check out the theater kids who last saw this teacher.

Dean and Sam go in and see someone dressed up as Bobby and a bunch of other people performing the musical to their lives. Dean and Sam are beyond shocked, the director of the play comes up to them and Dean straight up tells her there is no singing in Supernatural. Dean says if there was singing it would be classic rock, not this crap. Sam says they are looking on the disappearance of their teacher Mrs. Chandler, Sam finds out that she had a divorce and started drinking a lot. Sam asks them to show him a behind the scenes tour while Dean goes to the teachers office, Sam says it’s charming the production value but Dean is disgusted by it all.  Dean picks up a prop but they take it from him, Dean asks about what they are doing with their characters to make them seem kind of homosexual; Dean tells them to step back and that they are brothers. Sam is with one of the students and as he starts talking she just leaves him and tells him not to touch anything.

Sam starts to play with the controls. Dean is looking around the the office and is getting really disgusted with the girls story, so he decides to say he read the unpublished versions of Supernatural and tells her their whole story. The girl tells him it’s horrible fan-fiction. Sam and Dean meet up again, Dean is really not happy with it all and Sam jokes about the homosexual tendency of the characters in the play. Dean asks if the whole musical is just ironic and there is no case, Sam tells him they should probably just leave. One of the girls in the play is telling Mari that the musical is bad and doesn’t want to have a part with it. Mari notices the girl get kidnapped and pulled away by a man.

Dean and Sam come back to the school, they find out there is nothing on the surveillance tapes, though they found the same flower on the ground for the girl as was found with the teacher. Mari tells them that the girl quit the show and that they were fighting; she went out to help her hearing her screams and saw a scarecrow wrap her up in vines then disappear. Sam and Dean introduce who they really are, but the girls don’t believe them at all; Mari tells them that they can accept monsters are real but the books are all fiction. Sam asks if the scarecrow is in the book, but Mari says it was based off a scary story she heard as a kid.

Sam believes the monster is a Tulpa which creates itself to things you fear, they keep the scarecrow in the boiler room. Sam knows he’s seen the flower somewhere though, but Dean decides he’ll burn the scarecrow. Dean goes over to it and when he sees the scarecrow he can’t believe the girls are afraid of it, he takes a wrench and smashes it to pieces then throws it in a fire. Sam says that it’s Calliope, a godless that brings stories alive; she uses it to protect the authors to see their works come to live then eats them. Mari decides to try and cancel the show, though Sam tells her that will only make things worse; Dean tells her that the show must go on.

Mariruns into a room and grabs a paper bag to breath in, Sam tells Dean to deal with her; dean walks on over and asks her how she’s doing. Mari says it’s all her fault and if she never written her dumb play it wouldn’t happen, Dean says it isn’t dumb even though he doesn’t believe in it; though needs her to so they can kill Calliope. Mari decides she’s going to go for it and will do the role of Sam herself. Sam walks in to find Dean and they both have weapons to kill the god, Dean tells them that he isn’t a fan of their version of Supernatural but that they should give it their all for Mari. The play begins; Dean and Sam notice the scarecrow; but it grabs Sam and takes him away.

Sam ends up in the schools basement with the Mrs Chandler and MAggie; the girls the scare crow took away. Sam runs over to Calliope trying to killer her but is thrown away. Dean tells the girls to just keep going on with the show, he’ll figure it all out. Calliope tells Sam she can’t sit through the second act again; she’d rather just kill him and Dean. Mia sees the scarecrow and Dean jumps it right in the middle of the play. Sam asks Calliope why she is going after this show, she says the story has everything and actually kind of likes the music a bit; she thinks it’s a great story. Maggie knocks Calliope in the head and Sam is able to go ahead and stab her in the chest. Mari stabs the scarecrow and it explodes on the people in the first row in purple gunk.

Dean tells Mari she did good out there and she tells him the same; Dean says it’s been educational and that she should keep writing. Mari tells Dean she should have never thrown his amulet away, he tells her it never really worked; but takes it anyways. Sam tells Dean that he is right, staying couped up is not helping them. Dean and Sam sit back to watch the rest of the play. Dean and Sam are now back in their car driving, Dean puts the amulet on the mirror inside of the car. Mari gets a guest and it is the publisher who came to see her is Chuck.