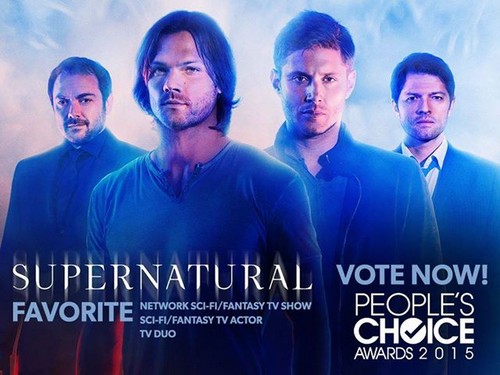 Supernatural continues tonight on the CW with an all new Tuesday December 9, season 10 episode 9 called “The Things We Left Behind” and we have your weekly recap below. On tonight’s episode, Castiel finds Jimmy’s daughter Claire in a group home and she convinces him to break her out. After she runs away from him, Castiel calls Sam [Jared Padalecki] and Dean [Jensen Ackles] to help find her before she gets into trouble. Meanwhile, Crowley faces his biggest challenge.

On the last episode, Jody Mills (guest star Kim Rhodes) reluctantly attended a mandatory sheriff’s retreat and was partnered with an overeager sheriff named Donna (guest star Briana Buckmaster) who wanted to bond. Just as Jody thinks things can’t get any worse, a body with just strings of meat and skin hanging off the bones was discovered. While the local sheriffs blame an animal attack, Jody knew better and called Sam (Jared Padalecki) and Dean (Jensen Ackles). Tim Andrew directed this episode with teleplay by Jenny Klein and story by Jenny Klein & Phil Sgriccia. Did you watch the last episode? If you missed it we have a full and detailed recap right here for you.

On tonight’s episode as per the CW synopsis, “Castiel (Misha Collins) finds Jimmy’s daughter Claire (guest star Kathyrn Love Newton) in a group home and she convinces him to break her out. After she runs away from him, Castiel calls Sam (Jared Padalecki) and Dean (Jensen Ackles) to help find her before she gets in trouble. Meanwhile, Crowley (Mark A. Sheppard) faces his biggest challenge yet. Tim Andrew directed this episode with teleplay by Jenny Klein and story by Jenny Klein & Phil Sgriccia.”

Tonight’s season 10 episode 9 looks like it is going to be great and you won’t want to miss it, so be sure to tune in for our live coverage of CW’s Supernatural at 9:00 PM EST!

Castiel goes back to see his vessels daughter, wanting to make things right; he asks about her mother and his daughter Clare says she left to go find herself. Castiel tries to take custody of his daughter, he gets into a meeting and is asked why he wants to. Clare says she wants to go, though the councelor asks for her to go into the hall; she then tells Castiel she doesn’t like liars and denies his application for custody. But till she is 18 she is hers, the woman doesn’t want Castiel to just be her friend but her father. Dean is watching the Three Stooges and is laughing like crazy, Sam comes in and brings him something to eat; he plays the show for him and starts laughing again.

Castiel goes back in the night and takes his daughter Clare from the place. We now see Crowley’s mother begging to see him, but the demons don’t listen and leave her chained up. Castiel is out with his daughter and Clare says he changed; he was so stuck up before and hated him. Though he’s better now, he’s much nicer. Clare bumps into Castiel as she gets up and runs out of the place, Castiel goes looking for his wallet and she stole it on him. Clare gets in a car with a stranger and drives off leaving Castiel on his own.

Castiel calls Dean and Sam about his daughter running away from him, Sam says what will they do if they find her; Dean says she doesn’t want to be with him. Castiel says he knows but wants to make sure she is safe. They go and eat in a diner, Dean says this is something he has to just let go; sometimes you just have to forget about them for your own good. Castiel asks Dean how he is, Dean says he is great and Castiel knows he isn’t and asks if the mark bothers him still. Dean says he needs him to promise him something, he wants Castiel to take him out if he goes dark; he doesn’t want Sam to get in the way as well.

Sam goes to where Clare was held and was told about how she was close to a person named Dustin who works at a hot dog place. We now see Clare with the guy Dustin and some guy named Randy. Randy says this is their last family meal, though Clare says there must be something they can do. Castiel finds Dustin out side of his work and tells him to tell him where Clare is by choking him against a wall. Clare is inside a store trying to steal some stuff, though Castiel walks in and stops her.

Clare tells them that Randy is her family, even if she steals for him; he has been there for her all the time. She tells them to all go to hell. Crowely tells his mother that she left him on his own at 8 years old, she tells him she had a disagreement with the locals and had to leave. Crowely says she never came back for him, she tells him they can be family again and he tells her he has a family now. Crowely knows she’d stab him in the back. Castiel, Sam and Dean go to a bar to talk about his daughter; Castiel though he could make everything up to her. Sam says he doesn’t think he can, he did take her father; Castiel says he never knew his own father so he can’t relate. Castiel asks if they loved their father, Sam and Dean says he didn’t win the greatest dad award but there were some great moments. Dean tells Castiel about a story of his father who was just a really strong man, Dean says he would have hated his father at tat moment; though his dad said it isn’t his job to be liked but to raise him right.

Clare is back at Randy’s though a guy is there with some bad people, he tells Randy that he owes him a lot of money and wants it. He tells Randy he can get a break if he gives him Clare.

A demon tries to kill Crowely’s mother but Crowely kills him first, his mother thanks him and Crowely tells her to follow. The bad guy goes up to Clare and locks the door behind him, he calls her pretty but she kicks him and tries to open the door. Castiel comes through the front door pushing some one away; Castiel demands where the girl is and hears Clare upstairs. Castiel walks in and stops Clare from kicking him on the ground; he takes her and brings her down. Castiel takes Clare out; they leave and Dean tells the other guys to not be dumb. Though they hit Dean with a glass over the head, he feels his mark burning and tells them they don’t want to do this, they kick Dean in the head.

Back in the house Dean killed everyone around him, the others come back in and see Dean just siting around them; Dean says he didn’t need to do this. Sam doesn’t know what to think, Castiel sees they are all dead and takes Clare out.