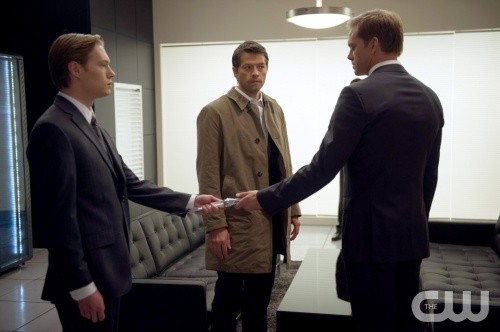 SUPERNATURAL continues on the CW tonight with a new episode called, “Captives.”  On tonight’s episode Castiel (Misha Collins) is captured by Bartholomew (guest star Adam Harrington).  Did you watch the last episode season 9 episode 13?  We did and we recapped it right here for you.

On last week’s episode Sam and Dean investigated recent murders where the victims were hundreds of pounds lighter after their deaths. Suspecting witches, the two go undercovered at a fancy day spa that all of the victims had attended for weight loss. While Sam was hired as a fitness instructor, Dean took kitchen duty. After Dean swiped some tainted food and passed out, the guys realized someone was drugging the guests and literally sucking all of the fat out of them until they died.

On tonight’s episode Sam (Jared Padalecki) and Dean (Jensen Ackles) are stunned to discover the Men of Letters’ bunker is haunted. Their investigation leads them to a storage facility where the demons have been keeping a prize possession. Meanwhile, Castiel (Misha Collins) is captured by Bartholomew (guest star Adam Harrington).

Tonight’s episode looks like it is going to be great and you won’t want to miss it, so be sure to tune in for our live coverage of CW’s Supernatural at 9:00 PM EST! While you wait for our recap hit the comments and let us know what you thought of the last episode?

Looks like the bunker is haunted. Dean lies in bed listening to music. Sam hears him cry out and comes looking for him. He grabs a sword and looks around. He sees flashes of light and then a specter. Dean is there and agrees they’ve got a haint. They Ty to figure out how something got past the wards. They think its someone who died there and Sam is worried it’s Kevin. They ask and the ghost gives a sign. Looks like the prophet is back.

A man walks away from a funeral. Cas grabs him and asks where Metatron is. He says the dead girl and the angel Rebecca that possessed her are no longer friends with Meta. He says they broke with him and live at peace with humans. He tells Cas that Bartholomew killed her.

Kevin’s ghost goes quiet. He’s having problems communicating. Dean tries to reach out to his spirit. He talks to Kevin and says he’s sorry for what happened to him. He says he let him get hurt on his watch. He wishes he could fix it and says its his fault. Sam comes in and they hear Kevin who tells Dean to quit the pity party. He breaks through the veil and they can see him. He tells them no one can get into heaven and all who die are stuck in the veil. He begs them to find his mother. He says he knows she’s still alive. Candy – another ghost – said she saw his mom. He tells Dean that’s how he can make it right.

In Wichita Kansas, the brothers find the bridge where Candy’s ghost should be. Cas and Bartholomew meet. They hug it out. Wow!

Dean and Sam wait impatiently. Dean leaves Crowley a message and Sam tells him he’s just not that into him. The radio they brought sparks to life and Candy speaks to them through the white noise.

Bart and Cas reminisce about the glory days. Cas commanded Bart back then. He says he was a great warrior. Cas says he was known as a torturer of captives and Bart says he had orders. Cas says he seems to be free of that constraint and Bart agrees.

Candy cries and says they are all in boxes side by side. She says they were kept in the dark and cold. They were chained near cement and there was a ridged metal door locked from the outside. She says it was two men that kept her. One was short and British (Crowley). She says she tried to escape. She was caught and stabbed on the bridge. Hey ask about Mrs Tran and she says she was alive last time she saw her but she hopes for her sake that she’s dead. She’s not…

The door opens and a man comes in. Mrs Tran screams in terror.

The boys race down the road to check the nearest storage facility. Turns out Candy was the sweetie of a powerful politician. They wonder why Crowley killed her and Dean thinks it was the other guy. Sam is annoyed he’s giving Crowley any credit.

Bart explains they’ve take over Buddy Boyles’ ministry. He promises Cas he’s safe there and knows he’s after Metatron. He says he wants the same thing. Bart says he’ll beat Malachi to Meta and together they can take him down.

The desk clerk at the facility comes out and they flash FBI badges and ask to see records. He coughs it up. Dean flips through it while Sam checks the floorplan diagram. He thinks its corridor Q and the three rooms were rented by a D Webster. The clerk tells him he has a fourth unit on the other side. The bothers split up to investigate. Dean finds a room of scary weapons and stuff. Sam breaks into the other room and finds Mrs Tran. She calms down when she recognizes him and says they have to get out of there. The door codes trapping him with her and he notices a camera watching him. Dean gets suspicious and the clerk knocks him out.

Bart shows Cas a map of Metatron sightings. Cas says he can lure him out. Bart is pleased. He says the two of them united would send a powerful message.

They bring in Rebecca’s buddy and tell Cas he has to help torture him. He’s not pleased.

But then he takes her hand and looks at her. She tears up. She tells him again to take her to her son and demands the flashlight. Dean wakes up on the floor. The clerk is quoting Crowley angrily. Dean works on his knots while they chat. He says Crowley left him in charge of the prisoners and hasn’t even called in. He says he wasn’t even allowed to kill them only protect them. The kid is a demon. He wonders if Crowley will even give him credit for capturing them and Dean tells him they’re friends now. The kid is pissed. He tells Dean he quits.

They cut on the faction angel and then Bart tells Cas to finish him. Bart tells him their leaders knew Cas didn’t have the guts to kill the prisoners. He reminds Cas that he killed to steal grace back. Bart tells him to prove himself. Cas says he sees the choice as obey or be killed. He refuses. Bart kills the guy and his grace flares out.

The demon cuts on Dean but then Sam is there and saves him. Bart tells Cas he always thought he was better than him and punches Cas. He doesn’t strike back and says angels have to stop fighting angels. Bart tries to kill him and Cas turns it on him but then doesn’t  kill him. Bit when he comes at him again he takes Bart out. He walks away.

The demon tells them to kill him and then he thinks they’re saving him for Crowley. Nope. They let Mrs Tran off him. She does and then tells the brothers to take her to her son.

Back at the bunker they call out to Kevin. He shows up and they tell him his mom is there and safe. He asks if she knows but then she’s there crying. They face each other. Dean gives her all of Kevin’s stuff. She finds a ring that was his Dad’s. she says its the object his spirit is likely bound to. He warns her against taking Kevin with her. She says she has to try and keep him safe.

Cas stands at the grave site apologizing to Rebecca for not saving her. Another Angel is there. One of Bart’s and he says he wants to follow Cas’ path and says there are others.

Kevin tells the boys he’s sticking with his mom to protect her since it was his fault she was taken. He tells Sam he knows it wasn’t him that killed him. They swap goodbyes. Kevin asks them to promise him to get over it. He says he’s been watching their drama and it’s stupid. They agree.

But as soon as Kevin and Mrs Tran leave Sam turns his back on him and walks away.