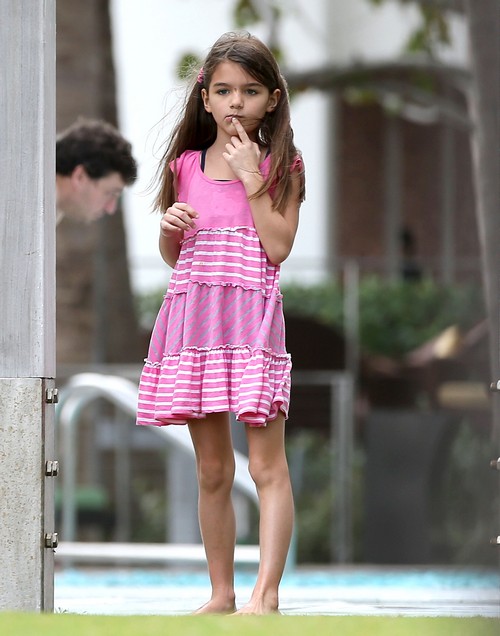 According to a new report from Star Magazine, Suri Cruise is out of friends because Katie Holmes just split with her fashion partner, Jeanne Yang.

A ‘source’ tells Star, “Suri’s two best friends were Jeanne’s twin daughters, Zoey and Sydney. Suri doesn’t see them anymore and is paying the price for Katie’s drama. Making friends at school isn’t easy for Suri due to her fame — and attitude. The other kids are intimidated by her, plus she’s a total diva.”

Aw, the girl is 7 years old. I really don’t think anyone is a ‘diva‘ at 7 years old. I’m sure she’s spoiled from all the attention she gets from her parents, but Suri always seemed outgoing enough that I’d doubt she’d have trouble at school. Plus, it’s not like she’s going to some local public school with the rest of the plebeians. She’s going to a private school that has the children of many of Manhattan’s most wealthy, which means that other kids are bound to be in the same boat as her.

Anyway, the source continues, “Zoey and Sydney were like big sisters. After growing up in Scientology, then enduring her parents’ breakup, this is another heartbreaking blow.”

I’m sure Suri was close to Jeanne’s daughters, considering how often Katie and Jeanne worked together in each other’s company. However, just because they left doesn’t mean Suri is left ‘friendless’. It might be a blow, sure, but she’s got school and her various after school activities to make more friends.

What do you guys think? Is this a low blow from Star? Let us know your thoughts in the comments below.