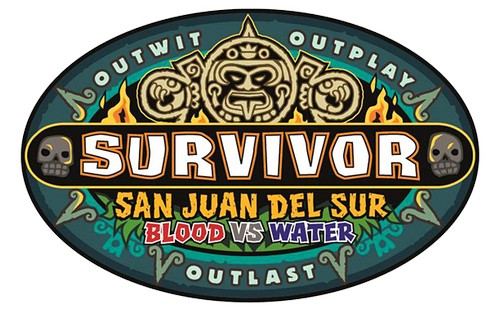 Survivor spoilers for 2014 Season 29 Blood vs Water San Juan del Sur promise viewers great drama and excitement. This week the new cast of season 29 of Survivor starts (way too excited about this) gets a taste of what to expect in episode 1 – and it’s a reiteration of Blood vs Water but without the component of prior players. Last time they did Blood vs Water, the prior play experience definitely helped not only the returning players but their loved ones that had been coached. This time, they are all nubes so I’m hoping it will be an entire hot mess and they all turn on each other quickly to max out the drama. Here’s some spoilers on the new cast for Season 29 of Survivor:

First, there don’t seem to be any smart peeps this season. There are no Cochrans. There are no clever schemers like Tony. These are more your average Joe Schmoes aside from John Rocker who is interesting, but no brainiac by any measure – quite the contrary.

Drew and Alec Christy – These are spear fishing brothers that are pretty clueless. One is a model – both seem to be aspiring to a Fabio type role. Alec was a washout in high school so he’s going to be a doof at puzzles. Brother Drew says his hobby is booze cruising, so looks like the gene pool is pretty shallow in the Christy clan. They’re both in good shape so they may do well in physical challenges, but anything requiring brains, count these two Florida fools out.

Keith and Wes Nale – Father and son Cajun firefighters. The son, Wes, wanted to bring beer and dip. Gross. Dad wants cigars and his truck. Yee-haw. On the upside, both can hunt and fish. On the downside, these two may channel Russell and Brandon but they look a little less cray. I don’t want to perpetuate the stupid Southern stereotype (since I’m one myself), but Cajun is a whole ‘nother bag of crazy cats. What’s fun is Wes still lives at home and his dad wants him gone. Dad sounds smart, his son not so bright. They both should do well in physical challenges. Firemen are usually in good shape.

Missy Payne and Baylor Wilson – Mom Missy owns a competitive cheer gym, has been divorced three times and may be looking for her next ex-hubby on San Juan del Sur. Daughter Baylor is a college student and a competitive cheer champion. Both are very athletic and competitive so that should serve them well and both look like they make a habit of under-eating so that’s a plus in their favor as well. Missy could have a killer instinct (think Texas Cheerleader Murdering Mom – remember that?) and Baylor looks like a hair puller. Neither seems like rocket scientists but both are prime for showmances. They could pull off the first mother-daughter showmance although the only single dudes are the surfer brothers, the gay guys and the junior firefighter. I could see Keith handing his son Wes off to the cougar cheerleader to get him out of the house… dip and all!

Jon Misch and Jaclyn Schultz – These two are dull. Jon says he thinks he’ll do well on Survivor because he can “lift things up and put them down” and would like to bring a piano. Wow. This a brain trust brewing this season. His GF Jaclyn was Miss Michigan who wanted to bring her cell phone to take selfies and her Bible. She also has no uterus. Not to be mean, but I hope she didn’t try to smuggle the cell phone and good book there. These two seem blah and neither strong nor smart enough to survive.

Jeremy and Val Collins – He’s a firefighter and she’s a cop. He also played in the pro-indoor football league. He says he’s both athletic and doesn’t need to eat a lot. Those can be huge advantages in this game. Val’s big problem is that she doesn’t like liars. Has she seen Survivor? Now Tony the cop did well last season, but if she’s got the beat cop mentality versus the clever undercover cop mentality, she may be out of this fast. My prediction is she’s going to piss people off and be gone and he’ll hang around longer since he credits himself as being “smiley” and a lot like popular player James.

Dale and Kelley Wentworth – Dale is a farmer from Washington who’s a Survivor show fan. He says he would bring a map, a book saying what’s safe to eat and toilet paper. Genius! His daughter Kelley loves puzzles and Scrabble. They are both competitive hard workers who aren’t afraid to get their hands dirty. I think the good money is on these two. She’s pretty but seems fierce and should do well at both physical challenges and puzzles and her dad seems pretty capable too. These too may be the smartest of the bunch – we just have to hope they’re not boring.

John Rocker and Julie McGee – John is a retired MLB relief pitcher who played for my local Braves but landed in hot water when he said he would never play for New York because of the diversity (he actually said a lot worse). He’s mostly just an idiot but the black players that were his roommates on the team said he was a good guy. He’s huge, a physical beast and an athlete so physical challenges should be no problem. Ask him to think his way out of a wet paper bag and you’ve got a recipe for failure. GF Julie owns her own spray tan company. She seems cute, not too bright and will probably be out even before her brawny BF.

Josh Canfield and Reed Kelly – These two may (or may not) fare better than the last gay Survivor Blood and Water couple. Josh plays Settlers of Catan (a brainy strategy game) and he can make fire. We’ll let it go that he wants to bring both a piano and an iPod to Nicaragua – I think he may do well. I don’t think his sweetie Reed will last as long – even though he’s a Survivor superfan. Reed cites among his skills being an “experienced hugger” and says he hates slow walkers and lazy baristas. They seem boring. This is a disappointment – remember the hysterics and drama of Colton Cumbie? That was fun.

Natalie and Nadiya Anderson – These twins have been on Amazing Race twice. They placed 4th but then were kicked off first on All-Stars. They are very competitive and believe in girl power. They have compared themselves to Kim and Khloe K and who wants that on Survivor? The sisters say they are bad asses, but I’m not sure that AR is good prep for Survivor. They don’t go hungry on the Race or get eaten by bugs or plot against each other. I think these girls are both cannon fodder because they are strong together and weak apart. And both say they want a barbell as a luxury item. Huh?

So my prediction for Survivor Season 29 is that, once again, the smartest person on the show will be Jeff Probst, the thinking woman’s sex symbol – Godiva man candy for the refined palate. After that I think Dale and Kelly Wentworth will do well, maybe Keith Nale and Josh Canfield. The rest are zeroes and knuckle draggers that will be kept around to win physical challenges then eliminated when it’s obvious they’re too dumb to hang tight. I only hope there’s some family drama to spice this season up. Fingers crossed. And if they make John Rocker keep his shirt off for most episodes, I’ll keep tuning in as long as he’s half naked and still on a tribe…

Join us Wednesday, September 24, 2104 at 8PM ET for the premier of Survivor San Juan del Sur – Blood vs Water! CDL will have live recaps, reviews, polls, and spoilers for this 2014 season 29 Survivor.

To follow along with the live recap of the Premiere episode Click Here. Nadiya was sent home first.