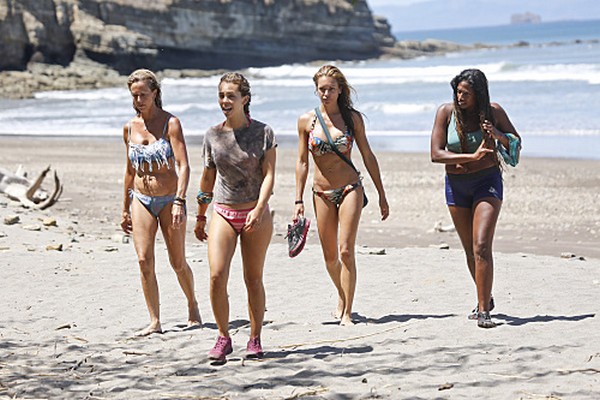 Tonight on CBS their Emmy Award-winning series Survivor Blood vs Water San Juan del Sur airs with an all new Wednesday November 5, season 29 episode 7 called, “Million Dollar Decision.” On tonight’s episode the game is  getting more and more difficult and one of castaways making them consider giving up.

On the last episode, in a rare move, a very hungry Hunahpu tribe made a desperate trade for rice. Meanwhile, one castaway on the Coyopa tribe concocted a plan to use a fake idol to try and insure their safety. Did you watch the last episode? If you missed it, we have a full and detailed recap right here for you.

On tonight’s episode the pressure of the game forces one castaway to contemplate throwing in the towel. Also, alliances start to crumble with the impending merge and one castaway commits the ultimate sin.

Tonight’s season 29 episode 7 looks like it is going to be great and you won’t want to miss it, so be sure to tune in for our live coverage of CBS’s Survivor: San Juan del Sur – Blood vs Water episode at 8:00 PM EST! While you wait for our recap hit the comments and let us know how excited you are about season 29 of Survivor. Who will be sent home tonight?

It’s merger day! After Coyopa comes back from Tribal Council, Hunahpu is told to grab their bags and head over to the other camp. They go and there is a big celebration feast, They get new buffs, food and even some alcohol to lubricate the merger. They also take the leftover food back with them and Julie pours some trail mix into her bag to take back as her share of the goodies. Once back, Jeremy starts trying to line up allies and talks to Jon, Missy and Baylor about taking Josh out.

Over at the merged camp, Wes gets a happy birthday from Jon. Keith wishes him a happy day as well. Josh thinks the couples should stick together and Josh says he’s going to lean on Baylor for a favor. They and Reed are with Alec, Wes and Keith and he hopes they can get Baylor and Missy to make the votes they need. Josh and Baylor chat and he tells her that if she and her mom are with them, they have the numbers. Problem is, her mom has other alliances with Natalie, Jaclyn and Jon.

Josh is annoyed that she seems to be blowing him off. Josh and Reed talk again and realize they just have to wait it out. Baylor goes to her mom and tells her about Josh. She says she needs to talk to him again. Missy tells her she needs to be more phony. Missy says sometimes Baylor acts like she’s 10 and tells her she’s going to have to blindside him anyway. She tells her to smile at everyone and play alog. Missy talks about her crappy decisions with men and her multiple divorces.

She’s happy that Baylor is listening to her. Josh sees that Baylor is under her mom’s influence now and so he has to make a play for others to get the votes they need. He sidles over to Jon and Jaclyn to talk strategy. Josh tells them that he and Reed won’t win the finals, but the two firemen could. Jon says again they are in the middle. He says they became a power couple when the tribe swap happened. He tells her that sticking to couples would take them to top six but another approach may take them farther.

The next topic is food. Everyone is hungry and they wonder where the trail mix got to. They say that someone has it. Julie has some trail mix she kept and wonders if she should tell them. She thinks she was smart enough to keep some, it should be hers. They decide to do a bag to bag search. They ask where Julie is and she’s napping in the sun. Jon looks in her bag and starts the #TrailMixScandal.

The others are angry that she had food. Wes says this is the most selfish thing you can do in Survivor and they all steal from her bag. Jon says at home, this is no big deal but out here you can’t do that. He says she’s selfish. They all trash talk her. She walks back to camp and says she senses tension. They talk about her and says she was entitled. Julie says this is not looking good for her right now.

It’s time for the #ImmunityChallenge. Josh heads in worried about being on the chopping block. This will be the first individual immunity challenge. Jeff shows the immunity necklace and says it makes you safe in the game. They have to balance a ball on a disk attached to ropes you hold with your hands. First you step back farther and later they’ll add a second ball to make it tougher.

They draw for spots and get started. There is wind blowing which makes it tougher. The wind rises and Jeremy loses his. He walks away angry and goes to sit down. The first round will last just 10 minutes. With one minute left, Missy drops her ball and then Julie as well. The rest make it through to round two. This time they have to move farther back. Reed loses his and is the first one gone in round two followed shortly by Baylor and Alec. Jaclyn is also out.

They are down to five and the winds are getting stronger. Natalie loses hers as well. It’s down to Josh, Wes, Keith and Jon. They have 10 minutes left in the round before they add a second ball, if needed. All four guys make it to the third round. Now they have two balls on the disk they have to control. Josh loses his almost right away. The wind rises again and Jon is out. That leaves father and son, Keith vs Wes. Wes loses control and Keith wins the first individual immunity. The others tease him about losing to his dad.

Jeff says someone will be going home tonight and says he’ll see them at tribal. Keith says tonight’s vote will let them know where everyone stands. Back at camp, Jeremy is annoyed that he was first out. They all give props to Keith. They start trash talking Julie and Jeremy says he can’t believe he was out of the challenge before her. Alec starts in on the trail mix garbage again.

Julie doesn’t say anything and isn’t sure what to do. She says she feels lost and confused. She goes to talk to Missy and tells her she can’t get her head in the game. Missy tells her that she’s had a tougher time since John got voted out super early. Missy tells her she’s her loved one too. Missy tells her not to give up. Missy acts sympathetic but doesn’t want her gone because of the plans to vote.

She says in private that she thinks her “stealing” food was despicable, but to her face, acts reassuring. Julie clearly knows she’s being manipulated and needs to figure out what she wants to do. Jon tells Jeremy that he’s a target because everyone is afraid of him winning immunity challenges. Jeremy wants Josh out because he’s playing the game too hard and well.

Josh says Jeremy is playing well but opposite to him so it’s frustrating. He says he and Reed need Jaclyn and Jon. He wants to go after the people who don’t have their loved ones. He talks to Wes and Keith who says that if they vote for Jeremy, they better be sure it goes through or else he’ll come after them. Jon says he’s changed his mind on what alliances he wants.

He tells Jaclyn they need to blind side Jeremy. She says that’s huge but he says it’s the best thing for their game to go with the couples alliance. He says he really likes Jeremy, but it’s the best strategy. Alec starts asking where Julie is and says he thinks she heard him talking about the trail mix. Missy is worried that his attitude will drive Julie to quit.

Julie says this has been the longest three weeks of her life. Jeff comes out to meet and talk to her. She’s very upset and tells him she’s lost her head but hasn’t been able to get her head back in the game. She says it’s hard to be there with the other couples when she came to play with John. She says she and John are rarely apart and the absence is hard.

Jeff reminds her that kids go to summer camp for longer than she’ll be here. He asks if she thinks she’s out of the game and she says she’s attracted a lot of negative attention. She says they see her as spoiled and mock her because they think she’s vain or because of her boobs. Jeff asks her what about her alliance and she says she feels very guilty about that.

He says her quitting could cost someone else a million dollars but she says she can’t compromise her needs for theirs. Jeff asks if she’s officially quitting and she says she is. Jeff goes to tell them that Julie has quit. Jeremy starts counting and panics because she was on his side. Natalie asks how she could do that. Missy says she wished she could have talked her out of it.

Josh says this makes everyone’s odds better unless you needed her in your alliance. Josh is happy and says in private that Jeremy is likely in trouble. Jeremy says it pisses him off that she kit. Alec said Julie had life the easiest here and Jaclyn says she dug herself a hole by hiding food from them all. She says that makes people mad. Jon says she was just so scared of facing up to her selfishness.

Jeff says the good news is there is no tribal council tonight. He tells them the game will continue tomorrow. Josh says Jeremy is on borrowed time and while he would have liked to get him out tonight, they can still get him. Jeremy is angry that she messed up his plans to get Josh out, not realizing that her leaving actually saved his bacon for a few more days.

Julie says this is mentally exhausting and she knows she’ll face some backlash from her decision, but says it was just too hard on her.