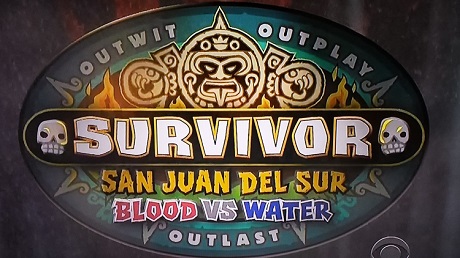 Survivor season 29 is almost upon us. The reality television juggernaut has experienced a steady decline in viewership ratings. Survivor: Cagayan’s (season 28) premiere was watched by 9.4million people, which makes it the second lowest Survivor premiere in the show’s history. Survivor: Caramoan’s (season 26) premiere ranks the lowest with only 8.94m viewers.

Survivor: San Juan del Sur (Blood vs. Water), which is currently being filmed in Nicaragua, has already experienced a few game-breaking production hiccups. This, the 29th season, is the “sequel” to season 28’s Blood vs. Water theme – a clear indicator that Survivor’s producers are struggling to reignite Survivor’s dimming flame.

If you’re opposed to spoilers, then please turn away now. These spoilers are super “spoily” so I think you’ll all be able to handle them — even if you have a sensitive stomach.

1. Blood vs. Water pits family members against one another. The first Blood vs. Water featured returning players. The sequel was supposed to feature 20 original players, but two players left the game due to medical reasons, just 48 hours before shooting began.

2. The producers were forced to continue with only 18 cast members, which led to a massive production overhaul – challenges were redesigned, filming schedules were changed, etc.

Jeff Probst explains: “We just lost two contestants [Friday]. We came out here with 20. We spend months casting our show — months. I mean, this is like….who you’re gonna ask to prom. All year you’re like, ‘Is it her or her?’ and ‘Will she say yes?’ And you finally get your 20 people, and then through no fault of their own — just a medical situation — they can’t play…. So instead of 20, it puts us at 18. Instead of equal men and women, it puts us uneven men and women.”

3. Survivor’s most popular love-it-or-hate-it Redemption Island theme was supposed to return for the Blood vs. Water sequel, but the theme had to be changed due to the shakeup.

“We decided, we have this arena being built: What if instead of [Redemption Island], we use it for something else. Something that will make Blood vs. Water a little more… interesting.”

In other words: Survivor’s producers wet their pants.

Survivor also suffered a great loss recently when 26-year-old Caleb Bankston (Survivor: Blood vs. Water) was killed in a train derailment accident. Bankston’s time on Survivor was initially overshadowed by fiancée Colton Cumbie who quit the show during the first couple of episodes. Bankston ended up as one of the season’s fan favorites. He is the third cast member to die since the show’s debut in 2000.

BB Anderson (season 1) died of brain cancer last year, and Jenn Lyon (season 4) died of breast cancer in 2010. Are you a Survivor fan? Who is your favorite contestant of all time? What do you think about the SECOND Blood vs. Water? Should the show be cancelled? Let us know your thoughts in the comments below.