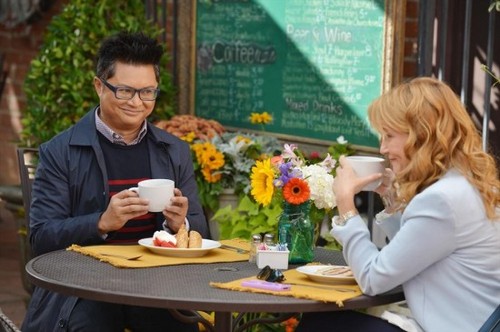 SWITCHED AT BIRTH returns to the ABC Family tonight with the season 3 premiere called, “Drowning Girl.” On tonight’s season premiere Kathryn dips her toes into new territory when she makes friends with a gregarious tap dancer. Did you watch last season’s finale? If you missed it we have a full and detailed recap here for you enjoyment.

On last season’s finale Toby and Nikki prepared for their wedding, Bay had to deal with Ty’s re-deployment, and Daphne faced the consequences of her actions.  John and Kathryn contemplated telling Toby their true feelings about his decision to marry. Daphne had to own up to her mistakes while Bay worked on a plan to continue her relationship with Ty while he was overseas. Meanwhile, Angelo found himself in over his head.

On tonight’s show senior year means big changes for Bay and Daphne, as the Carlton School for the Deaf receives an influx of hearing students who are not happy to be there. Daphne begins working at a free clinic as part of her probation from the Senator Coto blackmail scandal, and bonds with a pre-med student (guest star RJ Mitte, “Breaking Bad”) with a spinal injury. Bay is inspired by her art teacher (guest star Sandra Bernhard, “Roseanne”) and surprised by her jock classmate (guest star Max Adler, “Glee”), when she takes an art class at a local college. Toby tries to unite a divided Carlton by coaching girls’ field hockey, and Kathryn dips her toes into new territory when she makes friends with a gregarious tap dancer (guest star Alec Mapa, “Ugly Betty”).

RECAP: The show starts with Daphne waking up in a cell of some sort, turns out it was nightmare, because she wakes up from it in bed. Daphne goes down stairs to eat breakfast with her family, Kathryn is worried because her family are starting to grow up and they’ll be sooner or later going their own ways in life. Bay talks to a guy about how she shouldn’t always be talking  to him about her guy problems to him, that it’s not right; they’re interrupted when they find out there’s a line outside of their school, a line o security. Daphne tries to settle down her class to try and learn something, someone stands up and is disrespectful to her and the class really gets no-where until the teacher steps in. Bay goes to the principal and is complaining about how she’s not enjoying her arts class; the principal gives her a paper that seems to make her extremely happy. Students are complaining about what’s going on with the school recently, Daphne says that they all need to make an effort; Daphne talks to the girl who disrespected her in class, she’s trying to make sure there’s no bad blood between them. Daphne talks about her protest, the girl finds out it’s because of her protest that her school shut down and she had to be sent to this school for the deaf.

Bay is in an art class, the teacher is going on teaching the class and Bay seems to enjoy the class until a jock joins the class late, named Miles, but goes by the name as Tank interrupts. Tank sits next to Bay and says she’s his type of gal, she doesn’t look impressed. Kathryn goes to a tap dancing class, she talks to Trevor; he mentions that Kathryn should try some tap dancing, since she was a cheerleader; he says that tap dancing is cheer leading for the adults. Daphne finds John at his car; she needs him to drive her to her community service. Kathryn is talking to Trevor during the step dancing class and is asked to be quiet during it. Daphne arrives at where she’s supposed to do her probation work, she’s late and the man who’s like the top dog at the place is saying that it’s unacceptable to be late. Campbell tells him the director of the clinic that he’s needed somewhere, to let Daphne slide. Regina’s boss tells her that she’s going to be moving to London, Regina says she’s excited for her when she really isn’t. The art class is still going on, Tank looks bored and mentions that it’s time to end the class reminding her because he’s bored. For their next project, they need to draw the person they sit next too; Bay is teamed up with Bay, Bay wants to get together to do the project. Tank can’t meet up with her due to a pledge, so she’ll need to go to him.

Daphne is giving briefed for what they do at the probation place and what she’ll need to be doing, she talks to her direct super visor; he tells her what to do and sends her on her way. Daphne needs to check the shower; Daphne leaves the place she needs to work for probation. Daphne meets up with Campbell outside, he offers her a ride in his Camaro; she wonders how he’s able to drive, he explains how he’s able to drive. Daphne asks if Campbell is there for probation too, turns out he’s only a volunteer. Campbell tells her how he broke several bones and had tons of injuries due to snowboarding accidents. Daphne accepts Campbell’s offer for a lift home. Regina walks in to talk to Bay to see how she’s feeling about school, she mentions how she has no more hate energy left for school anymore. Regina wants to ask something about Ty, she asks if they broke up; Bay is surprised she knows. Bay says that the decision was made due to the fact that Ty is far away and they are in different places. Regina mentions how her boss moved to London and she might need to find herself a new job. Bay says that Regina should buy the business herself, because she’s fully capable of doing so. Daphne arrives home and talks to Toby about what happened at the probation office, Daphne starts crying because she believe John is going to throw her out; Toby tells her it doesn’t matter because John is her dad. Daphne mentions that what she did was a huge screw up, that everything they had has just vanished. Toby tries to comfort Daphne.

Daphne runs in to speak to the principal about finding a new basketball court, to get the team back; they can’t do that because they need a coach, uniforms and more to get it. Daphne is interrupted by the woman who’s not treating her with respect from the beginning of the episode. Kathryn is having lunch with Trevor, she gets a call from her daughter for more socks; Trevor makes a joking comment about having kids. Trevor then invites Kathryn to her drum circle; but Kathryn can’t go because her husband is throwing a charity event. Kristie calls Angelo, to talk about the restaurant; she tells Angelo that there’s much work and that to get the restaurant up on its feet it’s going to cost a lot more money. Angelo agrees to pay more money for the restaurant. Bay goes to the frat house to meet up with Tank; Tank looks like he’s still a pledge and is being treated with very little respect by the other guys. Bay wants to get the project done, but Tank is far too busy. Bay is trying to sketch Tank from a picture of his on a wall. Marybeth finds Bay and they catch up about what they’re currently doing, Bay asks if she’s talked to Ty and if he asked about her; but it seems that Ty hasn’t even spoken a word about Bay. Marybeth wants to tell Bay about something, but Bay interrupts and says she needs to find a guy to kiss at the party.

Regina walks in to speak to Angelo, she wants to make a business proposal to him; she wants to buy her bosses business so she mentions Bay’s idea about doing so. Angelo then mentions that he gave up Abby because of her and even paid for her rehab, Regina is pissed off and calls him a child walking off. Tank notices Bay drinking far too much and going up with a guy, Tank stops her and tells her that it’s not a good idea to go up with Cliff. Tank takes her outside and brings her a bucket, because she’s about to be sick. Bay then asks why he did it. Was it because she didn’t say I love you to Ty; Bay is talking about her ex-boyfriend to Tank, Tank mentions he’s not the right guy to talk to about this stuff. Bay keeps going on about Ty, Tank says he doesn’t a jack about love; but that Bay needs to go home. Tank asks if there’s anyone she can call to pick her up, Tank then says that she’s going to be okay. Daphne arrives home after with field hockey sticks, Toby asks what she’s doing with them; Daphne doesn’t know what to do with them. Toby asks what’s up, Daphne talks about how she wanted to use the Basket Ball court, but was given the field hockey sticks instead. Toby says that he can coach field hockey if she’s desperate, Daphne asks if Toby misses being at school; he misses it a lot in fact. Toby says his life sucks at the moment and Daphne says hers isn’t the best either; Angelo walks in to talk to Regina for what he said. He tells her how he was in a bad mood, because of how they need to redo the pool; Angelo understands that the business means a lot for Regina and wants to invest in it for her. John talks about how there’s a charity thing tomorrow to Kathryn, Kathryn mentions about blowing it off; she makes an excuse that Connie broke up with her boyfriend and needs help. John wants Kathryn to go with him, but she asks for just this once and he agrees. Daphne and Toby come and pick up Bay from the frat party, she sees the hockey sticks in the car and asks about them; Toby and Daphne then explain how they’re going to start a field hockey team.