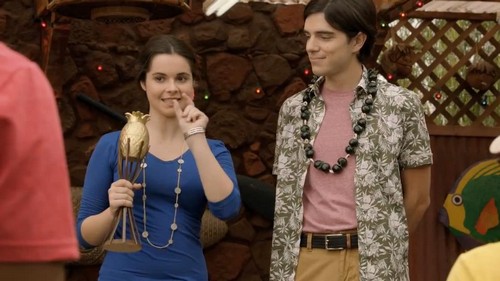 SWITCHED AT BIRTH returns to the ABC Family tonight with a new episode called, “Departure of Summer.” On tonight’s show John and Kathryn contemplate telling Toby their true feelings about his decision to marry. Did you watch last week’s episode? If you missed it we have a full and detailed recap here for you enjoyment.

On last week’s episode Bay and Daphne hosted a bachelorette party for Nikki. Meanwhile, Toby’s bachelor party went off course because of Simone; Jennice made some surprising requests for the wedding; and an altered living arrangement had Angelo and Regina reexamining things.

On tonight’s show Toby and Nikki prepare for their wedding, Bay must deal with Ty’s re-deployment, and Daphne faces the consequences of her actions.  John and Kathryn contemplate telling Toby their true feelings about his decision to marry. Daphne must own up to her mistakes while Bay works on a plan to continue her relationship with Ty while he is overseas. Meanwhile, Angelo finds himself in over his head.

John is wondering why no one has said anything to Toby And Nicki yet. He thought with all the parents on the same page they could now tell the kids not to get married. They adults keep trying but something always came up.

Although there’s one thing that’s going to demand their attention – Daphne. Senator Koto had called in John to his office where he showed him the tape of Daphne and Nicki breaking into his office. The man certainly doesn’t have a heart because he’s threatening to press charges.

John is so disappointed in Daphne. He never expected such a screw up from her. Daphne can’t even explain herself properly. She says she didn’t like the Senator talk about abstinence while he carried out an affair with an intern. The last little tidbit flying right over John’s head. Then top it off Regina has only just moved back in.
Regina tried to talk Daphne about what she did but the ginger refuses to understand what she did. All she says was that she was doing what was right. As if she was the only one that does it. She continues in her stupidity by going to see the senator. Why Daphne?

This rashness is more expected from Bae who lives up to her title. Ty ad told her that he would be in Afghanistan for a little while before they moved his troop to Germany. So Bae takes it upon to try and graduate early just to go university in Germany. Like following a man always works out. Luckily for her, her problems aren’t big enough to faze Kathryn and John at the moment. Not when they found Toby’s STD results only moments ago.

There’s only one thing that will ruin things for Bae and that will be when Ty tells her that he’s not going to be safe as much as they thought. He thought he was going to watch the water supply lines but he found out that his troop will be constantly attacked with roadside bombs. He’ll be lucky if he make it to Germany.

Then later when Bae is he filling him on her plan he tells her that they should keep their relationship simple and not take it too seriously. Before Bae could argue with him Daphne pulls her away. There’s a family crisis.

Toby had overhead the parents already talking about divorce and he confronts them in the kitchen. Bae and Daphne come in right when the parents are explaining that they don’t want their kids to rush into things when they don’t know who they are as person yet. Because this situation is similar to her and Ty’s Bae is immediately on the defensive and Daphne is backing her. Finally Ninki’s mom breaks down with what she believes are the truths. If the kids want to have sex then they should. They don’t need to get married just to have sex.

Angelo is having his own crisis. He has his daughter but he can’t do it alone. He’s tired and getting so easily frustrated. Is keeping Abby what is ultimately for her? Or for him?

Ty had lent his room to a buddy of his and when he returned to base he knew he had to change his sheets. What he didn’t expect was to have Bae walk in on him doing just that. She sees a condom rapper and automatically assumes he must Aidia. Ty knows he has to let her go so he admits cheating on her when he never did.

Distraught and angry she goes to Emmett. She wanted to know why did guys cheat in general. Seeing as she thinks it’s happened to her twice now. He comforts her by telling her Ty won’t understand what he did until he realized what he lost.
Angelo knows what he’ll lose and he does it anyway. He agrees to an open custody situation with Abby two dads. That way she’ll grow up in a two parent household and he’ll be able to see her from time to time.

Toby and Nicki had followed her mom’s suggestion. The two had sex and afterwards they called off the wedding. Maybe mom does know best. Please someone get Daphne’s moms. Her meeting with Koto went well as in he’ll drop the charges but for a price. John and Kathryn were willing to pay ye Daphne wasn’t.

She went to Jace and put up a confession on his political blog. Jace decides to write about his own part as well. It seems he was sorry he lost Daphne over his stubbornness. John, Kathryn, and Regina are mad. Still Regina is more forgiving over her telling the truth. Now they have to focus keeping Daphne out of jail.At least the senator can’t hide from his deed anymore.

To finish the summer Toby and Nicki had indeed cancel the wedding their parents planned but only to elope at city hall.

Find out what happens next this upcoming January…