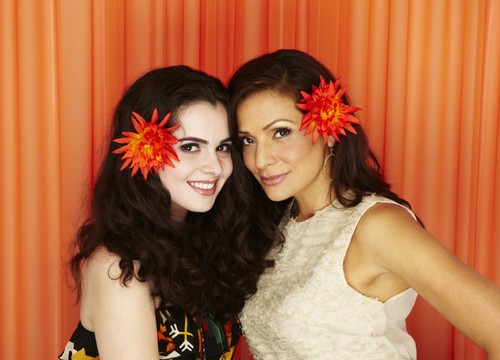 SWITCHED AT BIRTH returns to the ABC Family tonight with a new episode called, “He Did What He Wanted.” On tonight’s show Daphne is getting mixed signals from Jace and Bay learns more about Mary Beth and Ty. Did you watch last week’s episode? If you missed it we have a full and detailed recap here for you enjoyment.

On last week’s episode the demands of an “adult” life started taking their toll on Toby and Nikki’s relationship. When she saw that Toby was overwhelmed by the demands of work and planning a wedding on a budget, Bay looked to lighten the mood and books his band to perform at the local carnival. Angelo was frustrated by Regina and Bay’s messiness, while Adrianna’s frequent visits had Kathryn on edge.  Meanwhile, Jace introduced Daphne to geocaching.

On tonight’s show the politics of being a senator’s wife are put to the test when Kathryn has an uncomfortable encounter. Daphne is getting mixed signals from Jace and Bay learns more about Mary Beth and Ty. Meanwhile, Angelo joins the country club and Regina starts a new job.

Daphne isn’t experiencing awkwardness when she runs into barista boy Jace. He isn’t being shy either as he flirts with her. However when Daphne tries to make a date, he’s busy. He says he has other plans.

Ty and Bae are still hanging out. Their friendship seems to have regrown and it’s looking like so did they’re chemistry. Bae runs into her new friend, Mary-Beth. She wanted to ask about Ty but realized her friend needed her more. They had put away her dead brother’s things. Ty was there and he helped out but he never told Bae.

John and Katheryn are missing Bae. They’re even getting nostalgic over her messy art room. John jokes about demanding Bae to come back home but was it really a joke. The couple continue onto their club to enjoy themselves when they run into Gino and Regina. The Kennishes aren’t really happy yet thy laugh off the coincidence. Gino on the other hand joined the club to have some funny and forget his situation and also so that Regina could build up her client list.

Daphne does find out what Jace’s plans are. According to her co-worker, Jace is hosting a party.

John and Katheryn are enjoying themselves lunching with a seemily nice couple. Katheryn tells some jokes and everyone laughs. Things are looking good until John and the female guest step away for a moment. That’s when the nice lunch companion decides to tell Katheryn about all the times he’s pictured her without her dress. His wife and John return before Katheryn could say anything.

Daphne joined Emmett and his dad for lunch. Emmett begins lunch by already having an attitude but things get worse after he finds out his dad is planning on getting a cochlear. A hearing device. Emmett feels his dad is only doing this because of his new girl and refuses to listen when Daphne tried to caution him.

Bae is speaking to Ty about possibly setting up Mary-Beth with someone when John catches them. Ty quickly excuses himself. John wants to know why Bae never said anything about Ty being back. He would like to what’s going with her. Bae, wrongly, admitted she told Regina about Ty before she confesses she knew John wasn’t Ty’s biggest fan.

Emmett and Travis are talking when Emmett mentions how his dad is getting a C.I. Seeing how much Emmett is upset by this Travis tells him how he’s been thinking about getting one too. He wants more opportunities and will get them if he could hear. Emmett thinks he’s a sellout even though Travis says he’ll continue to sign. But to Emmett its still a betrayal.

Angelo is around the pool at the club when he begins to network. It’s more his abs and dimples that makes the effort but it’s working.

Daphne and Emmett go to Jace’s party. He’s surprised to see her but in no way does act guilty. If he did it would have probably have helped clue in Daphne to know that there were other girls there he appears to be interested in.

Bae does convince Matt to go golfing with her, Ty, and Mary-Beth. Although Bae does try a little too hard once they get to the golf course. Despite her blunders, Mary-Beth is at least enjoying herself. But not for long. The double date is a bust. Matt isn’t interested in Mary-Beth. Ty is able to cheer her up with good memories of her brother and just when Mary Beth is getting better she realizes she lost her brother’s dog tags.

Daphne confronts Jace on his flirting. He tells her that he’s only using them. He’s a political blogger in search of a story. He didn’t want to tell Daphne because he knew she’d be disappointed.

Mary-Beth never did find the dog tags and Ty is kind enough to take her home. There’s goes that double date.

Regina was worried about Angelo’s spending but he informs her that he has a plan.

Emmett’s dad comes to see him to try and patch up their relationship. Emmett is only willing to patch things if his dad doesn’t get the implant.

Daphne is back at the office when one of the interns, whom she grew close to, tells her she’s being transferred. She was the one that had an affair with a senator. The story Jace was trying to chase. Daphne tells her friend to come clean instead of being pushed aside but her friend doesn’t want to risk her career.

John does go to confront his boss. At first the guy denies it but then he gets malicious by implying Kathryn made it up because she was lonely. John throws some things around but makes his point clear. Stay away from Kathryn.

Daphne goes to Jace to tell him he’s right. She doesn’t want him to use her friend but she will help him take the guy down.

John is still angry when he notices Regina in Bae’s art room. Regina is taking some things for Bae. John demands Bae’s return and is willing to use legal mean if necessary. Regina has had enough she tells John she knows he had it out for her. Why? John finally let’s his temper loose and admits he could never forgive Regina from keeping his daughter away. Also she was right if he found out about the switch earlier he would have taken both girls.

Bae goes Ty’s. She wants to know if he’s not into her anymore. Ty answers her by kissing her.

Regina goes into the house to talk to John and find him on the floor and unresponsive.