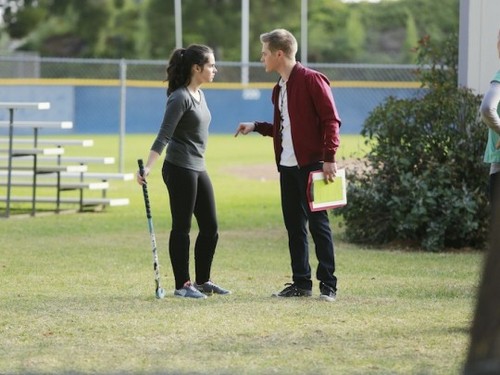 SWITCHED AT BIRTH returns to the ABC Family tonight with a whole new episode called, “Your Body is a Battleground.” On tonight’s episode Both Daphne and Bay have to make things right in their lives. Kathryn invites Renzo over for dinner.   Did you watch last weeks season premiere? If you missed it we have a full and detailed recap here for you enjoyment.

On last episode senior year meant big changes for Bay and Daphne, as the Carlton School for the Deaf received an influx of hearing students who were not happy to be there. Daphne began working at a free clinic as part of her probation from the Senator Coto blackmail scandal, and bonded with a pre-med student with a spinal injury. Bay was inspired by her art teacher, and surprised by her jock classmate, when she took an art class at a local college. Toby tried to unite a divided Carlton by coaching girls’ field hockey, and Kathryn dipped her toes into new territory when she made friends with a gregarious tap dancer.

On tonight’s show when her art teacher (guest star Sandra Bernhard, “Roseanne”) proves to not be easily impressed, Bay is pushed to re-examine her talents. And adding to her discomfort is her forced commitment to the new Carlton field hockey team.  Daphne makes a mistake at the clinic, and Campbell (guest star RJ Mitte, “Breaking Bad”) helps her correct it. Kathryn introduces her new friend Renzo (guest star Alec Mapa, “Ugly Betty”) to John. Meanwhile, Emmett thinks he may have discovered who has been vandalizing cars at Carlton.

The episode with Bay trying to get out of joining Toby and Daphne’s field hockey team. Daphne finally convinces Bay to join the team when she tells Bay that she will receive school credit for phys. ed. Later at school, Daphne is passing out fliers for the field hockey team when she has a run-in with rude girl again. Daphne’s friends are discussing Hannah’s tire getting slashed at school. Daphne and friends agree that the new kids are causing problems at their school.

In Bay’s art class, her teacher critiques Bay and Tank’s portraits of one another. For Tank’s portrait of Bay, he drew a tiny dot on a piece of paper. The art teacher kicks him out of the class. Kathryn and Renzo are enjoying tap class when John calls. Renzo answers her phone, leaving John curious about him. Meanwhile, back at class, Bay tries to convince the art teacher to allow Tank back in the class by trying to take responsibility for Tank’s portrait, or lack there of. She finally convinces the teacher to let him in by telling her Tank was too busy taking care of her when she was drunk and upset over her break-up.

The first field hockey practice takes place. At home, John asks Kathryn about the man who answered her phone. She tells him it’s Renzo, and that’s he’s the one who convinced her to join the tap dancing class. He asks why she didn’t tell him she was taking the class, she says she was afraid he would think it was stupid. He then inquire about Renzo, sounding a bit jealous, until Kathryn informs John that Renzo is gay. She then suggests inviting Renzo to dinner.

At the doctor’s office, Campbell shows Daphne the dollar jar he has made for every person who tells him to answer the phone. A skateboarder who has hurt his arm appears at the desk asking to see a doctor. Regina and her mother discuss Regina’s new business venture. Regina’s mom informs her that she volunteered her to babysit her cousin’s new baby. Back at the doctor’s office, Campbell tells Daphne that the skateboarder left without signing out, Daphne freaks out, worried she’ll lose her probation work. She takes off to find the skateboarder.

Field hockey practice continues, with Bay having a little trouble catching on to the game. Toby gives her a hard time, and after getting knocked down during a drill again, Bay flips out on Toby and quits. She runs off. Meanwhile, Emmett catches someone in the act of slashing another student’s tire.

The next day at , Bay is posing for Tank’s portrait. Tank has to go to practice, and he tells Bay that he’s helping a new teammate learn to play. She is impressed by Tank’s thoughtfulness. Elsewhere, Regina visits her pregnant cousin, who is ready to pop. She learns that her soon-to-be born baby cousin will have to sleep in the living room because there isn’t enough space to put her anywhere else. Later, Bay confides in Toby that she is doubting her talent, Toby encourages her to keep trying. Meanwhile, Renzo arrives at John and Kathryn’s house for dinner. At the doctor’s office, Daphne returns to tell Campbell she thinks she knows where to find the skateboarder, they leave to go find him. Elsewhere, Emmett and his friend look over the footage he took of the tire slasher. They can’t see the tire slasher’s face but notice a unique symbol on their hoodie.

Daphne and Campbell find the skateboarder and tell him that he is probably diabetic, he tells them he knows but there’s nothing he’s going to do about it. Campbell convinces the skateboarder to come by the clinic so Daphne won’t get fired. Campbell tells the skateboarder to do it to “help him out with this girl.” Daphne is amazed that Campbell convinced the kid to return to the clinic. Campbell tells her that he is determined to walk again. He tells Daphne he wants to get back on a skateboard one day. She asks him why he would risk getting paralyzed again. He said it’s worth it. She tells him she likes being deaf and he asks if she remembers being able to hear. She says no so he tells her that he does remember how to walk and he wants to know what that’s like again.

Back at John and Kathryn’s, Renzo entertains the family with a dance routine. He accidentally reveals that Kathryn attended the last drum circle. When John realizes that she lied, he gets upset. Renzo excuses himself to the bathroom, John asks Toby and Bay to give he and Kathryn a moment alone. He reams her for lying to him. Renzo realizes his error and tries to apologize but the damage is done, so he takes his leave. John and Kathryn continue to argue. They fight over Renzo, then Kathryn reveals she’s tired of pretending that she’s happy. At Regina’s house, she and Daphne reminiscence over their old neighborhood. Daphne says that she misses how everyone would sit out on their porches in the evenings and visit with one another. Regina tells Daphne that her cousin thinks that they are now apart of the rich, upper-class crowd because of where they live. She finds it ironic that her family members view her as rich when she is so broke. Daphne finds Toby outside on the phone, still trying to recruit members for the field hockey team. He tells her that Sheree was a player at the other school but she won’t return his calls. The next day at school, Daphne challenges Sheree to a basketball match. She tells Sheree that if she wins, Sheree has to join the field hockey team. Sheree agrees but if Daphne loses, she has to drive Sheree to school everyday. They agree to the terms. Meanwhile in art class, Bay and Tank show their teacher their revised portraits of one another. She is impressed. Later, Daphne and Sheree face off in a one-on-one game. Sheree is surprised to find Daphne quite the contender, but ultimately, Sheree wins by one point. She tells Daphne she will see her at seven in the morning, and that she likes breakfast burritos.

The next morning, Kathryn tells John she is going to see her psychiatrist after dance class. She leaves before he has a chance to respond. At school, Toby is trying a slightly different approach in teaching Bay how to play. Sheree shows up at practice, surprising Toby and Daphne. She plays it off tough, but Daphne is excited that Sheree joined the team. Regina is caught dumpster-diving by a handsome contractor who is renovating the building she is dumpster-diving at. He tells her it’s okay and to take whatever she wants. At the clinic, Daphne meets Camp bell’s ex-girlfriend. She is jealous. Bay and Emmett are going with some new friends to have pizza when Emmett notices one of the friends is wearing the same hoodie as the person who slashed the tires.