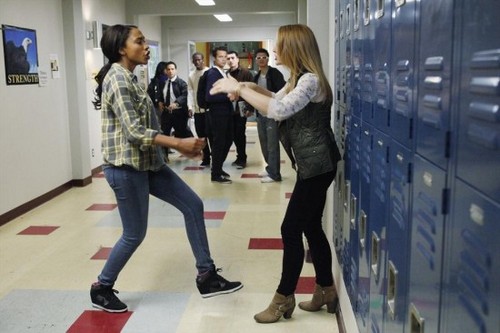 SWITCHED AT BIRTH returns to the ABC Family tonight with a whole new episode called, “Fountain.” On tonight’s episode A false accusation tests Daphne’s already tenuous relationship with Sharee.   Did you watch last weeks season premiere? If you missed it we have a full and detailed recap here for you enjoyment.

On last episode when her art teacher (guest star Sandra Bernhard, “Roseanne”) proved to not be easily impressed, Bay was pushed to re-examine her talents. And adding to her discomfort was her forced commitment to the new Carlton field hockey team.  Daphne made a mistake at the clinic, and Campbell (guest star RJ Mitte, “Breaking Bad”) helped her correct it. Kathryn introduced her new friend Renzo (guest star Alec Mapa, “Ugly Betty”) to John. Meanwhile, Emmett thought he might have discovered who had been vandalizing cars at Carlton.

On tonight’s episode Daphne’s attempt at building a friendship with her field hockey teammate, Sharee, has been met with lukewarm reception at best, and it takes a turn for the worse when Sharee gets in trouble at school. Bay agrees to help her art teacher Teresa set up a showing at a Minneapolis gallery, in an effort to get a letter of recommendation for her art school application.  Meanwhile, a business opportunity puts Regina in a conflicted position.

Tonight’s episode begins with Emmett confronting Matthew about slashing Sasha and Natalie’s tires. Matthew says he did it “get their school back,” and that the board is re-considering their decision to bring the students from the other school. Then, Daphne and Regina chat before red has to pick up Sharee for school. At dad’s, Daphne and John have a moment, the first since Daphne’s arrest, then red and Toby discuss the field hockey team. Kathryn encourages Bay and Toby not to give up on their current endeavors. After Bay leaves, Toby tells Kathryn he’s thinking about getting his own place. She’s surprised to hear that he’s already talked to Dad about it. She offers to get Renzo’s friend to help him look for a place, he declines.

Later, Toby coaches Bay and Red at field hockey practice. Toby asks Daphne how things are going with Sharee, she tells him she tried to talk with her earlier, but it didn’t turn out well. Bay asks Professor Darcy, her art teacher, if she would write Bay a recommendation for Pratt. She offers to help the Professor with some of her work, so Professor Darcy asks her to come along to Minneapolis to help her with an art show. Bay asks Tink along for the ride to help with heavy lifting.

Another tire gets slashed and Emmett shares with Travis that Matthew is the the culprit. Emmett asks Travis for advice on what to do with the information. Travis tells him to keep quiet for now, that it will only cause problems for Emmett if he tells what he knows.

Kathryn and Toby return from looking at a prospective new home for Toby. She’s thrilled about the place they’ve just checked out because it’s close to home, but Toby says he can’t afford the rent. Not to worry, because Kathryn offers to help foot the bill. Bay arrives home and shares her plans to go to Minneapolis with Professor Darcy the next day. Toby reminds her that she has a game that day, as well, and that she has to choose between the game and the art show. She chooses the show, so he kicks her off the team.

Regina shares her portfolio with the cute contractor who asks her to come along on his business trip to Denver the next day. They’ll be taking his private jet. She accepts the invitation. At school, Daphne asks Sharee for help in winning the game tomorrow, since her dad’s going to be there. Sharee tells her not to worry, but after Daphne walks away, Sharee is told that she has to comply with a mandatory locker search. During the search, Emmett and Travis are observing what’s going on, and Travis advises Emmett again to just let things play out. Later on at home, Toby shares with Daphne that Sharee won’t be playing in the game the next day, because she was expelled earlier when a knife was found in her locker.

Daphne goes to Sharee’s to find out what happened at school. She asks Sharee why she had a knife, Sheree informs her that it was box cutter, not a knife. Daphne asks why she had a box cutter, Sharee explains that she works at a retail store after school and uses it there. Daphne remembers that the slashings happened before school, therefore Sharee couldn’t have done it, because Sharee was with her. She tells Sharee she will talk to the principal tomorrow.

The next day, Bay and Tank head off to Minneapolis with Professor Darcy. Kathryn arrives at Toby’s office to go with him to meet with the realtor about the apartment. Toby tells her he cancelled the appointment, and that he’s already signed a lease on another place, in Edgewater. At the art gallery, Professor Darcy’s latest masterpiece is not met with the reaction she was hoping for. The hot contractor offers Mami a job but she has to be on site in Denver for at least four months, which isn’t something she can do because she doesn’t want to be away from Bay and Daphne. She is shocked by how the contractor gets at her for declining his offer.

Later, Kathryn tries to convince John to back her up in trying to keep Toby from moving to Edgewater. He reminds her that she has problems with her own mother trying to run her life, and not to be that mom to Toby. At school, Daphne and Sharee meet with the principal, who agrees to allow Sharee to stay in school, and play field hockey, but she still has to go to Saturday detention for having a box cutter. Sharee accuses her of punishing her for no reason, and storms out. Daphne runs after Sharee, but Sharee is upset and shoves Daphne into a locker. After shoving each other back and forth for a moment, the fight is broken up.

At the gallery, Tank sticks his foot in his mouth, but doesn’t realize it until Bay tells him later. Bay goes to find Professor Darcy, who’s upset because no one’s interested in her latest art pieces. Professor Darcy advises Bay not to go to art school if she wants to be happy. Back at school, Toby informs Daphne and Sharee that the hockey team has to forfeit their first game because of their fight. In Minneapolis, Bay and Tank drive a drunk Professor Darcy back home. Kathryn gives Toby her blessing to move to Edgewater, but tells him he can always come home whenever he needs or wants. Later, Bay stops by to visit Regina, and asks her why she never became an artist. Regina says she just didn’t try hard enough, Bay shares her doubts about going to art school. Bays asks Regina how her day went, Regina shares about her awful trip to Denver with the hot, but douchey contractor. At John and Kathryn’s, Daphne comes by to see Toby. She is greeted by John, who is reading in the living room. He, of course, has already heard about the day’s events, so Daphne tries to tell him her side of the story. John cuts her off by making a snide remark, so she goes off on him and tells him she doesn’t care if he wants to throw her out the house anymore.

Daphne storms out of the house, and finds Emmett sitting outside, waiting for her. Emmett tells Daphne about what Matthew’s been up to. She asks why he hasn’t told anyone, Emmett shares that he doesn’t want Matthew to get expelled. Daphne tells him that Sharee is right about their school.

At Regina’s office, the cute contractor arrives with flowers and an apology. He also offers her a job again, this time with local projects so she can be at home with Bay and Daphne. She accepts the job, after a bit of endearment from the contractor. At school, Emmett and Daphne see Matthew, who is cleaning out his locker after being expelled. Guess Emmett decided to do the right thing, after all. Later that evening, Daphne runs into John outside the house. John apologizes for being so hard on her about getting in trouble at school. He explains that he still has trouble figuring out how to deal with her, because he feels like he’s cramming in sixteen years of absence. He also tells her she will always have a home with him, they hug and make up, then shoot a few hockey pucks around the driveway.