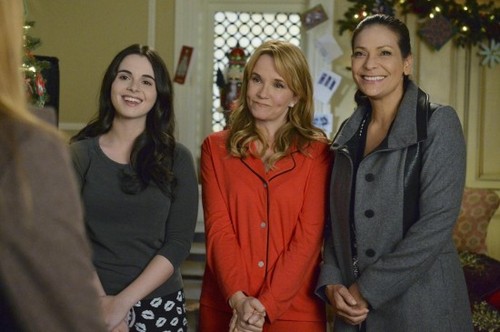 Switched At Birth returns to ABC Family tonight with an all new Monday December 8, season 3 episode 22 called “Yuletide Fortune Teller,” and we have your weekly recap below for you. On tonight’s episode, family Christmas traditions bore Bay [Vanessa Marano] and Daphne [Katie Leclerc], who eat some enchanted garlic knots and envision their lives as if the switch had never happened. In this alternate reality, one girl is an Olympic hopeful and the other is a successful artist.

On the last episode everyone was looking forward to commencement until shocking news about Carlton threatened to overshadow their special day. Daphne feared her future was in jeopardy when her past catched up with her. John and Kathryn were not happy when they learned about Bay’s non-traditional post-graduation plans. Meanwhile, Mary Beth was pleased when Travis’s wish comes true. Did you watch last week’s episode? If you missed it we have a full and detailed recap, right here for you.

On tonight’s episode as per the ABC Family synopsis, “as the Kennish and Vasquez families prepare to celebrate Christmas in their traditional ways, Bay and Daphne find themselves living each other’s lives as if the switch never happened.”

Tune in to ABC Family at 8PM EST to watch “Yuletide Fortune Teller ” we’ll also be recapping it all live for you right here. In the meantime head to our comments section and tell us your thoughts on season three so far and enjoy a sneak peek of tonight’s episode below.

Tonight’s episode of Switched At Birth begins with Kathryn hounding Bay to shell her peanuts so that they can make peanut brittle.  Bay whines that you can buy peanut brittle at the store already made.  Kathryn explains this is their first Christmas with Daphne and her mom and she wants it to be perfect.  The Kennishes and Daphne and her mom all head out to dinner together at their favorite restaurant Sal’s – where the garlic knots are “magical.”  Kathryn and Regina wind up arguing over who’s family’s traditions they will follow when they spend Christmas together.  Daphne and Bay split the last garlic knot and discuss how much easier their lives would have been if they have never been switched at birth.

The next morning Daphne wakes up at the Kennish house, and is shocked when she can hear her alarm clock.  She heads downstairs and tells Kathryn that she can hear – and Kathryn thinks she is crazy and calls her “Bay” before she goes to work.  Bay wakes up at Regina’s house and freaks out when she can’t hear anything – and Regina calls her Daphne.  She is also confused about why she has a little brother named Angelo Junior.

Daphne rushes over to Regina’s house where Bay is trying to listen to music on the radio and can’t figure out why they can’t hear anything.  They are shocked when they realize that they switched places, and then they put two and two together and realize that their wish came true and they never actually switched places at the hospital.  They have no idea how they are supposed to switch back, and they kind of like their new lives because Bay has an art show at a gallery and Daphne is trying out for the soccer Olympic team.

Daphne heads back to the Kennish house, where her parents are fighting over how much Kathryn works.  Toby arrives at home for Christmas, he has been living in Seattle – he is covered in tattoos and has his nose pierced.  He begins arguing with John about how much of a disappointment he is.  Meanwhile, Bay receives a text message from Emmett and goes to meet him – when she tries to hug him, he shrugs her off.  Bay learns that he called her there for advice because he is getting ready to go out on a date with a hearing girl named Madison – who doesn’t even sign.

Bay heads home and finds Regina has made a mess of the house and tried to paint a Christmas tree on the wall – she is passed out on the couch now.  She sees that she was watching a home video and presses play, its of her and her brother on Christmas morning with Angelo.  Her brother comes home and wants to know why Bay let her drink.  They get some paint and try to repaint the wall before Regina wakes up and is embarrassed.

Bay and Daphne meet up, and decide they have had enough of each others life and need to switch back ASAP.  They have to get more of the magic garlic knots from Sal’s restaurant, but it is Christmas Eve and it’s closed.   They head to the dumpster behind Sal’s and start searching for leftover garlic knots.  Sal catches them and they explain what happened – he laughs that the garlic knot is not the answer.  Besides, he gave all of the leftovers to the homeless.  Sal agrees to give them the recipe so they can try to make their own.  Now, they just have to get their families back together on Christmas Eve.  Daphne convinces Kathryn that it is for charity – and Regina agrees to go because Kathryn is practically a celebrity.

Regina and Kathryn start throwing back glasses of wine and getting to know each other while Regina tries to convince her to hire her at her cosmetics company.  Bay and Daphne begin making the garlic knots in the kitchen, but they realize they are missing one of the key ingredients.  So, Bay texts Emmett to have him drop off the oil.  Regina catches Daphne dumping her wine out when she isn’t looking – and she confesses that she used to do the same thing to her dad because he wasn’t a big drinker.  Meanwhile, in the kitchen Bay is totally grossed out when Toby starts hitting on her.

In the living-room – Kathryn and Regina are screaming at each other and realize that their daughters set them up and it isn’t for charity.  Regina announces that they are leaving, Daphne panics and grabs a garlic knot and she and Bay break it and repeat that they wished they had been switched at birth.  They wait and nothing happens – they are still in each other’s places.  Sal was right, it wasn’t the garlic knots.

On Christmas day Bay visits the Kennish house and tells Kathryn she is sorry about the night before – she surprises her with peanuts still in the shell and offers to make peanut brittle with her.  Meanwhile, Daphne heads to Regina’s house and gives her a gift, a Christmas movie since Regina said that she used to watch movies on Christmas to avoid her dad’s drinking.  Daphne offers to order some Chinese food and Regina agrees and invites her in.

The next morning Bay and Daphne wake up and they are back in their own bodies.  Daphne can’t hear, and Bay can – they both squeal with joy.