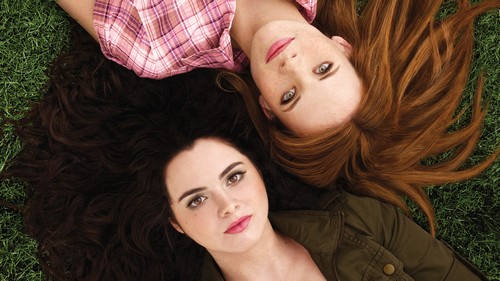 SWITCHED AT BIRTH returns to the ABC Family tonight with a whole new episode called, “Have You Really the Courage?.” On tonight’s episode Kathryn heads to New York to pitch a book while John finds himself in a difficult position.  Did you watch last weeks season premiere? If you missed it we have a full and detailed recap here for you enjoyment.

On last week’s episode Bay learned that Emmett was dating someone.  Bay was surprised by her feelings when she learned that Emmett had started dating again. Jorge asked Daphne to join him at a family function. Regina and Angelo had a heart-to-heart over their business ventures.  Meanwhile, John surprised the family when he made an unusual purchase.  “It Hurts to Wait With Love If Love Is Somewhere Else” was written by Linda Gase & Henry Robles, and directed by Melanie Mayron.

On tonight’s episode Kathryn is thrilled to get a second chance at being an author when Renzo (guest star Alec Mapa “Ugly Betty”) sets up a pitch meeting with his book editor friend. Bay worries that Tank may have a crush on her. Daphne is concerned when she learns more about Sharee’s home life.  Meanwhile, John, and Nikki’s mom Jennice (guest star Joey Lauren Adams “Chasing Amy”), hide some bad news from Toby while they help him move into his new place.

RECAP:  Toby sees that Kathryn is thinking about something, he asks what’s wrong and she mentions how she’s shocked that this will be their last dinner together, because Toby is missing out. Toby says it’s fine and that he’ll visit for other dinners. Kathryn has second thoughts on leaving home to meet Lorenzo for her new book, but Toby tells her it’s fine and that she shouldn’t worry. John says he’ll skip his trip to Nashville to help Toby move, Kathryn wonders why John never asked her about what her book is about, he then asks her and she says that she’ll tell him later. It cuts to Bay who’s with Tank, Tank brought her art supplies and they talk about her art work that she’s working on, Tank says that she should do the Soccer ball one, the bath tub one and the face painting. Daphne appears and Bay introduces her to Tank, Tank tries to say it’s nice to meet her in sign language. Tank tells Daphne that her sister Bay is like the Michael Phelps of art. Tank keeps complimenting Bay’s work, Daphne asks if Bay is interested in Tank in sign language, but she’s not into him. Tank likes Bay, but Bay doesn’t have feelings for him and doesn’t know what to do about it. Daphne says that she needs to tell Tank she’s not interested in him that way, the sooner the better.

Daphne is talking to her mother and it seems that she’s worried because of the girl she’s currently hanging out with and driving to school with, because of how they weren’t the best of friends before. Daphne believes that Sheri is a good person and deserves a chance. Toby is getting boxes of his stuff into his new home, he tells his dad to cool it on the heavy stuff and that he can do it himself. Toby is excited to know that Nikki is coming home; Nikki’s friend tells John that Nikki will be staying in Peru for another six months because she’s having a great time there and doesn’t want to come back. John thanks her for tell him about this, but doesn’t know how to tell Toby about it. Daphne comes to pick up Sheri, she sees family members fighting outside before Sheri gets in the car, when Sheri gets in the car Daphne notices that she has a bruise on her arm and it could have been caused during that fight that she just saw. Bay is outside with man, showing him her art pieces. The man says she needs to be different compared to the others, Bay says she’s been switched at birth, he doesn’t seemed impressed. Bay then mentions that she knows sign language and the man says that many others are bi-lingual. Bay mentions about playing field hockey and then he’s interested, Bay may need to continue field hockey. John tells Toby about his wife Nikki not coming when he expects her to. Nikki is talking to a woman for her new book with Lorenzo, Nikki is worried because she hasn’t mentioned her book idea at all, and Lorenzo says that he was catching up with her. Lorenzo then mentions about Nikki and her new book, Nikki wants to try forty new things and then write about it; but it turns out that the idea for a book like that was already brought up. Nikki looks disappointed with hearing the news and doesn’t know what to do.

Daphne comes up and talks to Sheri saying that she should come to dinner, Sheri says that she wants to borrow Daphne’s car; Daphne looks reluctant, but then she decides to trust Sheri with her car. Toby is leaving a message for Nikki to get in contact with her and find out what’s going on. Bay arrives with a cactus, Bay then mentions she needs to get into the field hockey team; Toby says that he won’t let her back on the team, because she already decided to drop out. Bay begs Toby for a spot on the team, he tells her she can come to practice and fill in as a substitute goalie. Bay asks why Mindy doesn’t want to be the goalie anymore, and he mentions it’s because she doesn’t like getting hit by balls. Tank is helping Bay practice for being a goalie for field hockey. Tank teaches her reverse psychology, Tank asks Bay if she wants to grab some BBQ after some field hockey drills. Lorenzo asks if Kathryn wants to hang out with him, she says that she doesn’t want to because of how her idea was burned to the ground. Lorenzo tells Kathryn that they’ll go shopping, meet up with other people and grab some drinks to have some fun. Toby asks Daphne where Sheri is and she has no idea, Tony tells Daphne that Sheri needs to be here in ten minutes or else she’s off the team.

The ladies field hockey team begin to practice, Daphne isn’t doing so hot and Bay completely sucks at being a goalie for now. Toby tells Daphne that she can take these girls on, that she needs to focus more. Daphne signs to Bay that she can see that she didn’t tell Tank that she has no feelings for him the same way he has for her. John is fixing up a bookcase for Toby, Nikki’s friend is with him and gets a text, turns out her date canceled on her and she’s alone for the night. She plans to go to a bar and watch the fight, but John says that she can join him since he’ll be watching it anyways. Bay is practicing as a goalie, she blocks the ball and she makes the team. Bay says that the whole team should have a pizza party at Toby’s place. At the party, Bay notices that Toby is looking at his phone constantly. Tank arrives at the party, and talks to Bay about how amazing she was. It’s obvious that Bay isn’t doing too well with having the thought that Tank has feelings with her, she doesn’t know what to do about it still. Kathryn is with Lorenzo and two women at a bar, it looks like a woman is checking out Kathryn at the bar. Toby is talking to Bay about his problems with Nikki, about how she won’t be coming back for another six months. Toby looks pissed about it, Toby finally receives a call. Kathryn tells a story to Lorenzo and the women about two women who swapped husbands for a night. The woman who she pitched the book idea told Kathryn that she’d by a book about that. Daphne arrives at Sherri’s house, to find her mom in the drive way. Daphne talks to her mother about how Sherrie missed field hockey practise, Sherrie’s mom invites Daphne Regina into their house for some gumbo. They both enter to find out that his woman is a huge cat lover they can see a sledgehammer on a chair with holes in the wall. It seems that there are problems going on in that household.

It looks like Kathryn will be writing a book about the story she recently told, looks like it could be her big break, but she doesn’t look exactly excited about it. Sherrie arrives home and finds Daphne and Regina in the living room, Sherrie asks her mom where she’s been all day and that she’s been looking for her throughout the entire time. Sherrie says to Daphne that sometimes her mother is feeling up and then she’s feeling down and can harm herself. Daphne then mentions to her mom about how they said they’d have dinner with another family, Sherrie’s mother understands and says that they can take a rain check, Bay is at the party drinking looking at Tank, she walks up and asks what her friends are doing. Bay goes up to Tank and tells him that she only sees him as friend, Tank says that it’s cool and the he should head out because of having an exam to study for. He’s about to walk out, Bay walks after him and trips breaking the beer bottle in her hand and cutting her hand with it at the same time. Tank rushes over and helps her out quick asking for someone to call the hospital.

John is talking to a friend of Toby’s wife Nikki, she’s surprised that John’s wife went to New York with another man, but no worries it’s Lorenzo. She mentions how she once watched John play; he was on a sports team when he was younger. He says that he’s currently washed up at the time. Regina is about to get home when she finds John kissing another woman, wrong place at the right time. They both apologize for the kiss and leave. Regina arrives home and tells Daphne that they need to talk about Sherrie, because of how Sherrie needs help and can’t deal with her mother alone. Daphne says that it’s none of their business at the moment; Regina says that it would be the right thing to do if Daphne tried to help Sherrie through this hard time. John calls his wife to talk about each other’s night; Kathryn says that she got the book deal. John says that he’ll call back because Toby is calling, he finds out what happened to Bay and is on his way. Bay says to Tank that she’s really glad he’s here; Tank offers to get water or something for her and then it fades out.