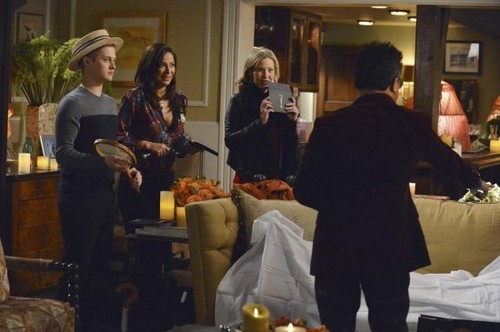 SWITCHED AT BIRTH returns to the ABC Family tonight with a whole new episode called, “The Scream.” On tonight’s episode Daphne plans a 21st birthday party for Campbell.  Did you watch last weeks season premiere? If you missed it we have a full and detailed recap here for you enjoyment.

On last week’s episode Kathryn was thrilled to get a second chance at being an author when Renzo (guest star Alec Mapa “Ugly Betty”) setup a pitch meeting with his book editor friend.  Bay worried that Tank may have a crush on her. Daphne was concerned when she learned more about Sharee’s home life.  Meanwhile, John, and Nikki’s mom Jennice (guest star Joey Lauren Adams “Chasing Amy”), hid some bad news from Toby while they help him move into his new place.

On tonight’s episode Kathryn’s celebration party reveals some unexpected news.  Kathryn’s murder mystery party quickly gets complicated when both John and Kathryn discover something about each other. Bay tries to get an invite to Tank’s fraternity luau. Meanwhile, Daphne plans a 21st birthday party for Campbell (guest star RJ Mitte, “Breaking Bad”).

John likes Tank. After the young man proved to be both responsible and respectfully; he figured that Tank would be the perfect fit for Bay. Yet as his wife points out he can’t always choose who his children decide to date. Bay is actually on the fence about whether or not she should date Tank. He’s different to her usually type and just when she started to think that could be probably be a benefit is literally right around the same time she learned he didn’t invite her to his frat’s luau. Mary Beth tried to say that maybe he didn’t have enough time to issue an invitation but she’s worried he didn’t ask because she had foolishly told him the “I think of you as a friend” line.

Thankfully the party will be enough of a distraction to keep anyone from asking any hard questions. Without her knowledge, Renzo turned her family party into a murder mystery themed party. Everyone is bound to enjoy themselves and it also provides the perfect opportunity for Regina to not let it slip that she saw John locking lips with his Toby’s mother-in-law. Jennice also happened to get an invite. Toby thought it would be a nice idea to get her out of the house.

Daphne however couldn’t make it to the party. She heard about Campbell’s 21st birthday at the last minute and wanted to throw him a surprise party. Too bad it wasn’t much of a surprise. Her plan was to invite Campbell to dinner and then take him to the party location but Campbell wasn’t playing along. He thought Daphne was asking him out and thought it would be awkward with her boyfriend. So she was forced to tell him about the party.

Campbell hadn’t gotten a chance yet to make a lot of new friends in the area and Daphne invited all of his old friends from back home. He hasn’t seen any of his old gang for months so his birthday surprise was the greatest for him. And he was having fun at the party when his ex, Gretchen, showed up. Gretchen doesn’t harbor any ill feelings towards Campbell. Honestly she’s angrier at Daphne. Gretchen feels that Daphne doesn’t deserve to have an opinion on Campbell.

A fact she makes clear when Daphne tried to ask her to intervene for Campbell. Some of his friends had given him a special snowboard that was fitted out just for him to use. Now they all know that Campbell was warned he wouldn’t be able to handle another fall but no one except for Daphne and Jorge had the nerve to try to talk him out of it.

Back at the house party, Bay finally worked up the nerve to let Tank know she was interested. They kissed and both of them were enjoying it when Bay chose that particular moment to ask Tank about the luau. He tried to tell her she couldn’t be invited and when that wasn’t enough to put her off he admitted the truth. He couldn’t invite her because the party is a dogfight. All the brothers were competing to bring the ugliest girl to the party.

Bay was naturally upset. She couldn’t believe that Tank was a part of that and when he said he didn’t agree with it she then asked him to prove it. She wanted him to quit fraternity. But he couldn’t. At least not for her or for his principles. His father went there and it was more important to him to keep the legacy alive.

Bay left him at the party. She knew she had to tell Mary Beth not to go to the party and why. And Mary Beth was hurt when she heard the real reason why she got invited. Though none of it really matters because Bay told her she’s got a hot boyfriend that loves her just the way she is.

While Bay was busy comforting Mary Beth she missed out what went on at the party. It seems everyone’s secret came out. John find out that Kathryn was willing to betray their closest friends for a book deal and she learned about his kiss with Jennice . What compounded the situation was that both parties didn’t hear the news from the horses’ mouths. John had accidentally found her manuscript and Kathryn had overheard him and Jennice talking about explaining their kiss to Regina.

Kathryn was so upset that she abruptly ended the party and no could figure out why until she barked at Jennice to leave her house. That’s when the kiss came out and no one was more disappointed than Toby. The entire scenario does put him in an uncomfortable position with his family and his wife. And yet when John showed up at his doorstep with a bag; Toby allowed him to stay. It would look bad for a senator to check into a hotel for an indefinite amount of stay alone.

Kathryn threw him out of the house and the girls don’t know about it. By time Bay returned home she was too busy forgiving Tank to notice the deadly silence in the air. As for Daphne, she was stuck having to explain herself. Campbell chose not to go snowboarding and afterwards Jorge asked her why she was so invested in the first place.

Daphne chose to admit to her feelings for Campbell. She explained to her boyfriend that she has feelings for them both and doesn’t know how to handle it. As if he could accept that without getting mad. He walked away saying she should let him know when she figures it all out.