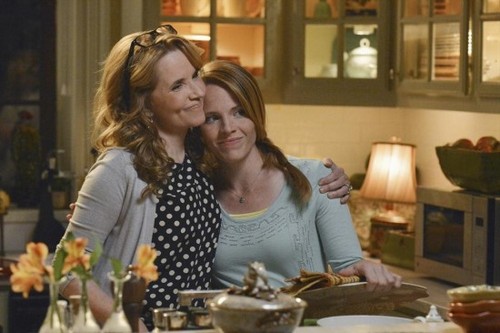 SWITCHED AT BIRTH returns to the ABC Family tonight with a whole new episode called, “The Past (Forgotten-Swallowed).” On tonight’s episode Daphne assists Angelo with a fund-raiser at the clinic. Meanwhile, Bay can’t ignore Mary Beth’s feelings for Tank.  Did you watch last week’s episode? If you missed it we have a full and detailed recap here for you enjoyment.

On last week’s episode  Daphne considered pre-med for college and Bay faced the limitations of her injury.  Daphne danced with the idea of pre-med studies and asks for more responsibility at the free clinic, but is it too much too soon? Worried that his hearing girlfriend will lose interest, Travis hesitantly invited her to a school formal even though he didn’t know how to dance. Bay was left spinning when her teacher demanded more of her art, despite her injury.  Meanwhile, John jumped at the chance to win Kathryn over.

On tonight’s episode Daphne tries to help out Angelo at the clinic’s fundraiser, all while juggling the attention of Jorge and Campbell. Bay must deal with MaryBeth’s feelings about Tank. Toby tutors Sharee to keep her eligible for the field hockey team.  Meanwhile, John and Kathryn invite one of John’s old baseball colleagues over to get some dish for Kathryn’s book.

RECAP: Daphne talks to Dr. J. and lets him know she’s taking off now and will be back for open house. He says that he was hoping to introduce her to one of her board members; Horhay comes downstairs to ask if Daphne could take Oscars place today, but she’s got a game. Campbell appears and asks if Daphne wants to go eat out, she declines and says everyone should eat together, you can see Horhay feeling a bit jealous. Mary Beth is visiting Bay, asking her about how physiotherapy is going on. Kathryn comes in and asks about when Tank is coming over and that ends up making Mary Beth leave. Daphne and the rest of the Lacrosse team lost their game, Toby tells them to listen up on the bus that they are going up a school he knows very well. Toby tells them to forget about the season and their losses that they need to completely prove everyone wrong. Kathryn goes into the kitchen and sees John cooking Salmon with curry sauce. He asks about the writing and she’s been feeling stressed lately with it. Kathryn asks if an old friend Donny could come over to help her with the book she’s writing, he says it’s cool, but she doesn’t want him wanting to relive those old times. Daphne arrives home with groceries; she talks about how she might get into a summer program because of Dr. J. introducing her to a surgeon. Angelo shows Daphne a video of a baby; it causes Daphne to feel left out. Tank arrives at Bay’s house; she talks about Mary Beth feeling awkward that she’s still dating him. She feels that Mary Beth wouldn’t want to hang out with them together, but Bay asks what if she hangs out with Mary Beth and he coincidentally bumps into them. Angelo is complaining about how his restaurant is going to be changing its menu, Daphne says that he should do a public testing of the food he wants to do. Angelo thinks it’s a great idea and he asks to have a public tasting at her fund raiser. Daphne says sure, but she doesn’t look too happy about that idea.

Toby is talking to his wife on the internet; she really misses him and wishes that he could be there with her. Toby tells her, he better go and that he loves her. Donny and his wife arrive for dinner at John and Kathryn’s place. Donny tells them that he met his wife at a yoga retreat; John and Kathryn go to work on dinner. Regina is with Daphne at the clinic, she’s impressed with how it looks. Kristie is at the clinic, she’s acting like a snob about the taste test being at a clinic. John is disappointed with how Donny is acting now, that he’s not as wild as he used to be back in the days. Regina asks if John and Kathryn are coming, Daphne tells her that their busy with friends over. Horhay appears behind Daphne introducing himself; Campbell arrives too in a tux introducing himself too. Bay and Mary Beth are at the bar, it turns out that Mary Beth tried to do a musical, but it didn’t go well. Tank arrives into the bar; Bay’s plan is going to plan. Mary Beth decides to head out instead, she is still not comfortable with Tank. Mary Beth knew that Bay planned them to bump into them; she is still feeling bad about the party. Bay is pissed off because Mary Beth doesn’t like Tank, she then tells her the truth about Ty and how cheating on her was a lie.

Bay demands to know everything about Ty, she’s not happy about it and doesn’t understand why he did that. Mary Bethe tells her it was the right thing and that he did it thinking about Bay. Mary Beth then says Ty is ten times the guy Tank will ever be, pretty harsh. Regina asks about how Daphne saved Dr. J., speaking of him he appears from behind and Daphne introduces Regina to him. Regina asks about the summer program, then Angelo arrives with his daughter Abby. Instead of seeing the surgeon about her summer program, everyone gets caught up with taking care of Abby first. John and Donny are talking to each other, he asks if Donny has been wanting to relieve the good old days. Donny talks about how he’s happy, with Reina. Donny tells Reina that Kathryn and John are going through a rough patch and that they want to have some adventure. It cuts to Bay who goes to Tank in the bar and tells him she has to leave, looks like she’s feeling confused finding out about Ty lied to her.

John and Kathryn aren’t wanting to have this adventure with Donny and Reina. Kristie says she’s leaving, she feels that Angelo isn’t taking the business seriously and that he’s doing this as a popularity contest. Daphne tells Kathryn how he’s able to make anyone like him and that it’s crucial for a restaurant to make the people like you. Kristie tells Daphne that Angelo is lucky to have a daughter like her. John and Kathryn tell Donny and Reina about how they weren’t looking for the type of adventure they were offering, it turns out that Donny and Reina knew they were going to say that and understand. Donny and Reina decide to leave. Bay is talking to Emmet, she doesn’t know if she would be with Tank if she knew that Ty didn’t cheat. Bay is now having second thoughts on Tank, because she’s comparing him to Ty. Daphne asks Dr. J. about meeting the surgeon about the summer program, turns out that he left. Angelo is looking for Kristie, he asks why Daphne never told him. Daphne finally snaps and tells him the he only thinks about himself and that she lost the opportunity to meet with the surgeon who could help her get the summer med program.

Daphne is sitting on a bench, Regina sees her and goes to talk to her. Daphne doesn’t know why she let him get to her; that she’s trying to become a family. Daphne tells Regina that she’s jealous of a nine month old and doesn’t know when it will be done. Regina tells Daphne that she might never get over it, that the only thing she can do is make sure it doesn’t make her bitter. John says it sucks that Kathryn hasn’t gotten more inspiration for her book, she then asks about a story that John and Donny were talking about. John tells Kathryn about the triple he did, meaning that he slept with three different women in the same night. John goes into more depth about the story and Kathryn is writing. Bay is talking to Tank about what happened with her and Mary Beth; that she has a lot to think about. Tank asks her if she’s going to get back together with Ty, she says no and then she mentions how she talked to Emmet about it. Tank is upset that he was the last she spoke to about the situation. A fraternity member of Tank’s enters his room and asks for more tequila, he’s going to be cheating on his current girlfriend; Bay then says something about a dog fight and he finds out that Tank told her about it. Tank looks pissed off, now there’s more problems to deal with.

Daphne is getting a plate for Horhay, she wants to get him some since he went home sick. Campbell offers her a ride to drop it off and then get something to eat together, she then sees Angelo and they talk to each other. Angelo apologizes for getting in the way of her meeting the surgeon, she admits how it’s hard to see her with Abby. Angelo tells her that the way he sees it is that he’s got three daughters, he then asks to take a look around the clinic. Campbell says he’ll go give Horhay the food himself while Daphne shows Angelo around. Toby asks Shuree about how the test went, turns out she passed and can play for the Lacrosse team. John asks about how the book is going with Kathryn, she says that she has gotten tons of great ideas from John’s stories. Kathryn tells him she’s got stories about herself she could share, though John is cool with finding out about it later. Tank arrives into the art class he ends up sitting next to Bay, though he doesn’t want to. Tank is pissed off, Bay asks if she ruined everything for him. Looks like Tank could be losing his position in the fraternity; Bay didn’t know that would happen, Tank doesn’t care at this point because he’s so angry.