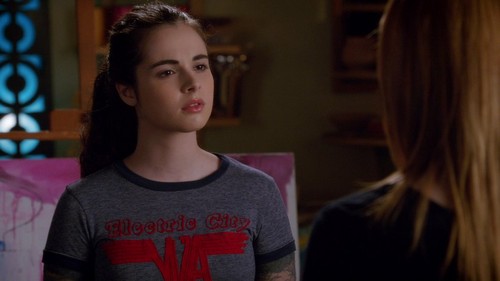 SWITCHED AT BIRTH returns to ABC Family tonight with a brand new episode called “Like a Snowball Down a Mountain.” On tonight’s episode, a shocking discovery is made by Bay and Emmett when they challenge Matthew’s threat of blackmail. Elsewhere, Daphne gets a promising opportunity at the clinic, but she’s concerned about how it may impact Campbell; and Kathryn’s past haunts her.

On the last episode Bay faced the consequences of her unplanned romantic encounter with Emmett. Did she break up with Tank; did Bay and Emmett start a new life together? Meanwhile, Daphne set out to find the person who vandalized her mom’s design studio. And Matthew continued to bully Emmett. Did you watch the last episode? If you missed it we have a full and detailed recap, right here for you.

On tonight’s episode Bay and Emmett work together to combat Matthew’s blackmail threat and make an unexpected discovery. Daphne gets a big opportunity at the clinic but worries about how it affects her boyfriend Campbell.

Tune in to ABC Family at 8PM EST to watch “Like a Snowball Down a Mountain.” We’ll also be recapping it all live for you right here. In the meantime head to our comments section and tell us your thoughts on season two so far and enjoy a sneak peek of tonight’s episode below.

Tonight’s episode finally ended with a will-she or won’t-she discussion. Bay broke up with Tank although she should have probably told her family that right away. Her parents already know she’s having sex but they think she’s doing it with Tank completely unaware that Emmett, lovable and age appropriate Emmett, is the only man in her life.

So when Tank stopped by the house asking to speak to Bay – John gave him a piece of his mind. He told Tank how disappointed he was that the young man put his teenage daughter in that position. Bay should never have needed to go looking for morning-after pills. Not if she’s being properly looked after anyways. John had honestly expected more and since learning about the pills he told Tank he doesn’t want him around Bay anymore.

Don’t worry on that score! Tank didn’t sleep with Bay, but thanks to John he now knows that someone did. She had told him there was no one else and that’s obviously been proven a lie now. So there goes any chance of them remaining friends.

Emmett just can’t catch a break. Matthew has a photo of Emmett that he’s using to keep his former friend quiet and Bay concocted a plan to get Emmett from out underneath Matthew’s thumb. They were going to break into Matthew’s locker and find his cell and laptop. Both of which Emmett knows the password to and then they’ll erase any damaging photos. But something happened while they were destroying the evidence.

They saw on Matthew’s laptop a file full of Emmett’s pictures. They were of all of Emmett by the way and not just of his anatomy. Matthew it seems took pictures from yearbooks and Emmett’s profile. Along with the file there was also a letter. Inside of the letter Matthew wrote about how much he was in love with Emmett.

This catfishing thing started out as way to get Emmett interested in who Matthew was on the inside but his plan went awry after Emmett texted “Mandy” that he hated Matthew. That’s when Matthew’s crush turned into spiteful hate.

Matthew caught Bay trying to sneak back into his locker yet before he could get her in trouble she told him that she knows. She and Emmett both read that letter so Matthew can’t hide his feelings anymore. Though the situation is serious it’s interesting to see how it was Daphne that was caught up in a love triangle last season while this time it’s Bay.

Daphne ended up choosing Campbell because she felt they’re connection was stronger. And it turns out she was wrong. Because if he really cared about her then he wouldn’t have become jealous and irrational when she was promoted over him. Campbell blamed her for their boss choosing her which was unfair.

And the same goes for the way he took it out on her. He didn’t want to follow Daphne’s “orders” and got her in trouble of her first official day. He knows Daphne has a lot on her mind so why be another problem?

Regina’s safety is constantly at risk and her boss carrying around a loaded gun isn’t given any one person peace of mind. Angelo is so worried he put in an alarm system at the gatehouse. It’s for both hearing and deaf so that everyone can be alerted to an intruder. These are the measurements they have to take to protect themselves.

Yet they aren’t enough. Someone waited for Regina to leave her office and that spooked her so bad she decided to take shooting lessons from Wes.

So maybe it’s a good thing Campbell found a job across town. If he couldn’t work with Daphne, then it’s best he starts putting distance between them.

Emmett chose to let what Matthew did go. What Matthew did was wrong but outing him wasn’t going to make Emmett feel any better. So he let it go and Kathryn tried to do the same. Her old nemesis Sarah Lazzard took out an injunction on her book. Kathryn had written about her as if she was some sex craved maniac and after some thinking she wanted to re-write Sarah’s character. But she was turned down.

Lydia liked the character just the way she is!