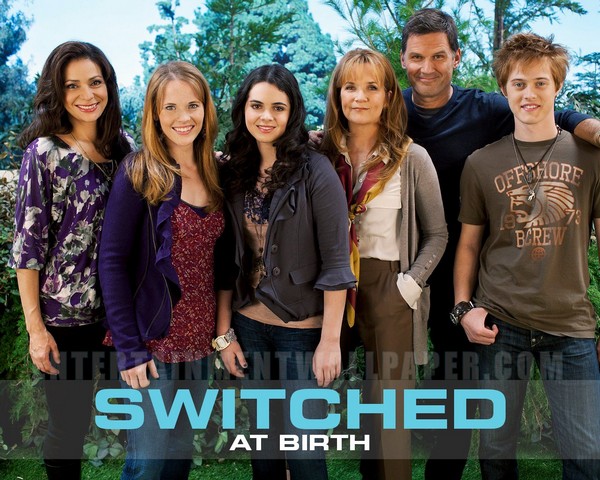 SWITCHED AT BIRTH returns to ABC Family tonight with a brand new episode called “The Image Disappears” On tonight’s episode, a loved one fights to survive following a tragic accident, and others place blame as emotions run high at the hospital.

On last episode back from a soul-searching trip to Iceland after his failed marriage, Toby returned with a new perspective on life and a surprising new aspiration for his career. Bay’s college dreams were knocked for a loop when she doesn’t get the news she expected. Angelo helped Daphne redirect her senior year stresses with a baking challenge. Meanwhile, Regina’s participation in the East Riverside project brought her to yet another moral crossroad. Did you watch last week’s episode? if you missed it we have a full and detailed recap, right here for you.

On tonight’s episode the Kennish and Vasquez families rally to support a loved one who is in critical condition. Amid the emotion, blame is placed, decisions must be made and lives are forever changed.

Tune in to ABC Family at 8PM EST to watch “And We Bring the Light.” We’ll also be recapping it all live for you right here. In the meantime head to our comments section and tell us your thoughts on season two so far and enjoy a sneak peek of tonight’s episode below.

Now that Angelo’s life is literally hanging in the balance, Regina couldn’t resist thinking back and reflecting on the life she used to share with him leading up to Daphne’s hearing becoming impaired.

But though her past is filled with its own regrets – the most pressing concern currently on Regina’s mind is Angelo’s health. The police had come by not long after he was admitted into the hospital and they were asking questions about Angelo’s state of mind prior to his accident. Regina had told them she couldn’t think of anything that would have upset him but that was a lie.

Secretly, Regina is still beating herself up because of what she said to Angelo right before his accident. She was so mad at him for questioning her priorities when he accused her of being selfish by keeping a job that put them all in danger that she said something she never got the chance to take back. Regina threw in his face the fact he abandoned two daughters because it was too hard for him to stick around.

The truth is Angelo was scared when Daphne got sick but he only left the second he realized he never fathered her and as for his second daughter – he made sure to give her to a two parent and loving home once he realized he couldn’t do it all on his own. So to throw around his faults like that made Angelo flee her office, late at night, hurt and feeling like even more of a failure than he was already.

Daphne had wanted to stick around for his diagnosis when her mother convinced her to leave and go take her SATs. She convinced Daphne to do so by saying Angelo wouldn’t have wanted her to miss her big chance. This is the last chance Daphne has of gaining a high enough score to get into Med school. And her parents knew how much Med school meant to her.

So Daphne was away when her father’s health took a turn for the worse and while he still had Bay at his side – Daphne was in a classroom when Angelo suffered a second hemorrhage. She returned to the hospital to find her father was brain dead. He had suffered too much pressure and possible blood on the brain.

Angelo isn’t coming back from this and his family is forced to deal with what to do next!

Some what to keep believing he could make a miraculous recovery and wake up tomorrow but then the others realize that maybe letting go should be best. Daphne had asked the doctor on Angelo’s case what they should do and he offered organ donation as a way to help people while at the same time have a part of Angelo live on.

However Bay doesn’t see that the machines are breathing for Angelo. In her mind, he could recover from this and so she doesn’t want to hear any other option besides waiting for him to come out of his coma on his own or going to a different doctor for a second opinion. Emmett had tried to get her to see sense and in return she nearly ripped his head off. Bay won’t let go of Angelo as long as she keeps envisioning him being there for her when she has her first child. She can’t let go of that dream.

But she wasn’t the only one dreaming of a future with him. Daphne had done the same. She saw Angelo being there for her at her wedding. It was supposed to be both him and John walking her down the aisle and yet she knows that’s never going to happen. Then again she isn’t holding onto Angelo out of guilt.

John had refused to loan Angelo the money to save his restaurant. Regina had thrown Angelo’s mistakes at him. And Bay hadn’t spoken to her father in weeks even though he was living right across the lawn from her. Each of them had a reason to feel guilty about what happened to Angelo. Guilty enough that they were willing to prolong his life just to make themselves feel better.

Though it wasn’t what Angelo wanted. Angelo left a will behind and in it he asked to be removed from all machines in case he was bread dead. In the end, he didn’t want his death to be some long drawn out tale from the hospital bed.

So they removed him from the machines and then proceeded to donate his viable organs, tissues, and bones to people who really in need of them. But when they were going over what was going to be donated – the consultant on the case told them the hospital most likely won’t be able to donate his kidneys.

Angelo ran off the road because of a brain aneurysm. It was preexisting condition that he was probably unaware of and the consultant went on to say that it had ruptured. Many things can cause a rupture like that – stress or even anger.

When Daphne heard the last part – she turned to look at her mother. She feels like she knows the reason Angelo’s brain aneurysm burst. And she doesn’t hold back from letting her mother know her opinion.