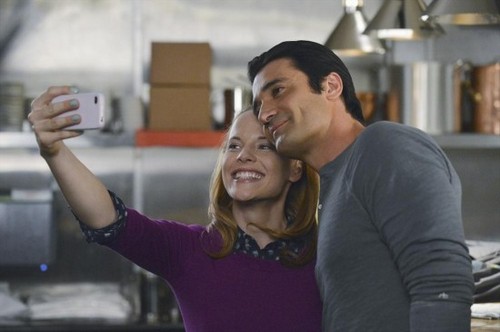 SWITCHED AT BIRTH returns to ABC Family tonight with a brand new episode called “And We Bring the Light” On tonight’s episode, Toby comes home from Iceland with a new career goal. Meanwhile, Bay gets unexpected news concerning college; Angelo has Daphne alleviate stress by focusing on a baking challenge; and Regina faces an ethical dilemma regarding the East Riverside project.

On last episode when she discovers Melody is considering an out-of-state move that would take Emmett with her, Bay encouraged Emmett to strengthen his relationship with his father. But a visit with Emmett’s dad revealed news that might change their relationship altogether. Kathryn and John clashed with Regina over funding Daphne’s college expenses, while Daphne interviewed for a Latina college scholarship.  Did you watch last week’s episode?  if you missed it we have a full and detailed recap, right here for you.

On tonight’s episode back from a soul-searching trip to Iceland after his failed marriage, Toby returns with a new perspective on life and a surprising new aspiration for his career. Bay’s college dreams are knocked for a loop when she doesn’t get the news she expected. Angelo helps Daphne redirect her senior year stresses with a baking challenge. Meanwhile, Regina’s participation in the East Riverside project brings her to yet another moral crossroad.

Tune in to ABC Family at 8PM EST to watch “And We Bring the Light.” We’ll also be recapping it all live for you right here. In the meantime head to our comments section and tell us your thoughts on season two so far and enjoy a sneak peek of tonight’s episode below.

Kathryn and John received a call late into the night about some sort of accident and then rewind twelve hours earlier – Regina was practicing shooting a gun with her boss, Wes. Coincidence? Let’s hope so.

Back at the house, the teenagers were put in a good mood with the return of the prodigal son. That’s right Toby is back from his little sojourn and incidentally his visit is one of the few remaining bright spots for this blended family. Though he doesn’t know it yet!

There is Daphne freaking about her SATs and then there’s Bay who finally heard back from the college from her choice. Only it wasn’t the acceptance letter she was hoping for.

Although, not wanting to ruin her parents’ happiness, Bay did keep her rejection a secret. She didn’t want to let her family down and neither did Daphne. That’s why she worrying herself about the SATs. If she doesn’t get a perfect score then chances are she won’t get into Medical School.

Toby, apparently, is the only kid that can afford to do whatever he wants. Or at least that’s how his sister feels. Her brother got married against everyone’s wishes and when that (naturally) failed – he went to Iceland where he became interested again in Music. As a result, Bay didn’t really stick around long at his homecoming dinner. She was too busy wallowing in her own self-pity.

But her brother pursued her. He got to her to open up to him and then he made it seem like it wasn’t that big of a deal. Pratt may not have realized her talent but that doesn’t mean she should begin doubting herself.

He talked Bay into doing a project. One simply for herself to make her feel better and she ended up using his trip as inspiration to create something revolving around the Valkyrie legends. Also their mother later tagged in. The new Kathryn didn’t need to know the importance of the project – all she wanted to do was support her daughter and possibly the arts during the process. So she even managed to trick John into joining them as well.

Meanwhile Regina is in for a world full of trouble. Her business meeting with Wes meant she had to meet with Chamber of Commerce. However Regina recognized one half of the duo she was meeting. It looks like the former Senator Coto landed on his feet after he was forced to resign out of shame (and because of Daphne). Now he’s part of the Chambers of Commerce and he gets to be half of the team that’s shaking down Wes.

Coto and his partner want cut-backs included in their arrangement with Wes. Regina wants to deny them this out of principle, but Wes knows his project won’t get off the ground without their get-go. So he’s willing to compromise all the while Regina is merely praying Coto doesn’t remember Daphne’s last name.

As it turns out, Wes did listen to Regina in the end. He chose to turn down any arrangement and try going alone with his project. And that didn’t make Coto happy. He implied that without them Wes and his team would suffer from even more retaliation from the community. Was he just trying to scare them of did he know something they didn’t?

Bay’s family project was a bust. Her visual show was abruptly finished before it could begin and that was thanks to them setting off a power outage.

Bay was so frustrated by not being able to do the art that she Kathryn as her own personal punching bag. Her mother was trying to cheer her up and Bay told her she doesn’t know anything about the creative process though she keeps pretending she does. She told Kathryn that she wasn’t a real writer. And before she could apologize and take it all back – the security team hauled them in for questioning.

Kathryn talked their way out of getting into trouble but that only made Bay feel worse. Here she has a cool and understanding mom and she lashed out at her. So Bay broke down and admitted Pratt didn’t want her.

All along she’s been afraid of her parents being disappointed and yet her mom chose in that very moment to continue to support her. Like she has always been doing!

Angelo took Daphne to the restaurant to help take her mind off all the testing. It granted them time to cook and bond. Though she did find one of the foreclosures letters he so desperately tried to hide. And Angelo was honest with her.

His restaurant failed because his business partner overextended herself and so his dream for the restaurant is gone. For a minute there he thought the place could be the way to lay down roots of his own but Daphne told him he didn’t a restaurant for that. Since coming back into their lives he’s formed a relationship with Daphne and she’s glad that he did.

They were leaving the restaurant when Daphne remembered where she put her SAT practice book otherwise known as what sent her into a maelstrom of dramatics to begin with. She left it at her mom’s place and when they to the studio they saw that Regina was there.

Regina returned to her place after her dinner with Wes. She had seen graffiti one the building so, using her newfound confidence that only a gun could provide, she went in to clean up even though it was late at night. And Regina still had that gun when Daphne came into the building.

She called out asking who was there and because Daphne was deaf – Regina took her to be an intruder when her daughter didn’t reply. Regina pulled a gun on Daphne and luckily didn’t shoot (she wouldn’t have missed if she did). And Angelo was livid when he found out about it a few seconds later.

Angelo and Regina had this huge argument. He wanted her to quit this entire project and when she didn’t – he stormed off.

John came to the rescue for Bay after his wife called him in. With her family there to support her – Bay was able to finish her project and feel proud of herself. And they made her forget all about Pratt at least for a while.

Then the accident happened. Angelo was involved in an as of yet unknown accident and all Daphne will remember is that she just got her father back only to lose him because of Regina. After all it was her mother that made him rush off!