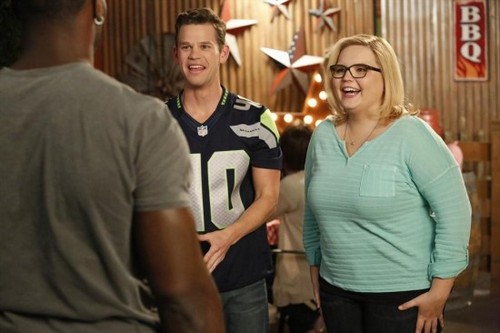 On the last episode Bay and Emmett worked together to combat Matthew’s blackmail threat and made an unexpected discovery. Daphne got a big opportunity at the clinic but worried about how it affects her boyfriend Campbell. Did you watch the last episode? If you missed it we have a full and detailed recap, right here for your enjoyment.

On tonight’s episode when she discovers Melody is considering an out-of-state move that would take Emmett with her, Bay encourages Emmett to strengthen his relationship with his father. But a visit with Emmett’s dad reveals news that may change their relationship altogether. Kathryn and John clash with Regina over funding Daphne’s college expenses, while Daphne interviews for a Latina college scholarship.

Tune in to ABC Family at 8PM EST to watch “Oh, Future.” We’ll also be recapping it all live for you right here. In the meantime head to our comments section and tell us your thoughts on season two so far and enjoy a sneak peek of tonight’s episode below.

Graduation is a few months away and already senior year is going downhill. Melody has been offered a job in Madison. However, the job would start during the kids’ final year so both Emmett and Travis would have to move and say goodbye to their respective girlfriends and their friends.

Bay ended up learning about this offer even before Emmett did. And rather than talk it over with him – she then conceived of a way to get him to stay at Carlton. She told Daphne that she’s going to talk Emmett into possibly moving in with his dad. Which sounded like a bad idea even to Daphne.

Emmett and his father have a rough relationship and lately his dad has been blowing him off for their arranged weekends. Although something had changed on his dad’s part because Emmett received an invite to a housewarming party. His dad and his dad’s girlfriend, Debbie, have found a nice place to settle in. It’s a big home and very different to the apartments he’s dad had been staying in since his parents split. And Bay talked Emmett into attending the party despite the many warning signs.

Melody also went to the party as her new boyfriend’s Gabe’s date. Gabe is a good friend of her ex and so he didn’t second guess his decision to invite her. Then again he didn’t know they were attending a secret wedding.

Cameron and Debbie had a surprise ceremony for the same reason he moved back into the suburbs – Debbie’s pregnant. Again Bay found out ahead of Emmett and that time she did try to give him a forewarning though she told him too late. When Emmett found about his sibling it felt like another betrayal. He figured his dad would soon replace him with the baby so he left the wedding before he could hear any explanations.

Bay later talked him into reaching out to his dad. She used her own experiences as child that felt she was going to be replaced (with Daphne) to assure him that his dad has room in his heart for both his children. If her parents can do it than so can Cameron.

Bay was so concerned about Emmett moving that she rushed into things. Yet Melody hasn’t even agreed to take the job. Nor is she planning to. She’s enjoying herself in her new relationship with Gabe and she knows her son needs both his parents now more than ever.

Besides, Travis for one would definitely have put up a fight. Mary-Beth is one of the few people that can talk him out of his normal rut. She helps him put aside the drama his family gives him on what appeared to be a regular basis. And once he proved to her that he cared – she stood by him. She also helped him meet his idol.

It was sweet that Travis at least had someone to turn to like that because not everyone has that kind of support. Daphne is applying to schools and let’s face it college is expensive. Frankly, too expensive for Regina to pay for on her own. So she told Daphne to go off scholarships specifically a scholarship for Latinos. But Daphne didn’t like the idea of it and she was right to feel weird about going after a scholarship for Latinas.

The interviewer told her that she would never understand what discrimination really feels like. And she’s right. Daphne is a red head with green eyes. She’s never been judges by the color of her skin.

Although Regina still hated the fact that Daphne dropped out of the race. As far as she was concerned by dropping out it sent the message that she wasn’t Latin and yes that might have been unreasonable on Regina’s part but that was the only thing she could give her daughter. The Kennishs had offered to pay for college and Regina turned them down using her principles (Daphne shouldn’t be handed things on a gold plate) as an excuse for the real reason. Regina wants to pay for Daphne’s school and she can’t afford it. So she tried to use her ethnicity and that didn’t work either.

Afterwards, Regina had a few options left and having Daphne give up on getting into one of the big schools just wasn’t one of them. So she told Daphne that they could use the Kennishs’ help. Still, that doesn’t mean Regina wants Daphne to completely give up on looking for a scholarship. The Kennish shouldn’t pay for all of it.

The Kennishs had a few rough patches (like other women) but at the end of the day they’re good people. And Regina never had to worry about them taking her daughter away.

Also Kathryn changed her book. She faced her publisher and told her that she’s changing Sarah’s character. The two women finally sat down and aired some much needed confidences and Kathryn felt she should give the other a second try. Plus as it turns out Sarah never did sleep with nor fool around with John. She tried and he graciously turned her down.

So that one last ghost laid to rest.