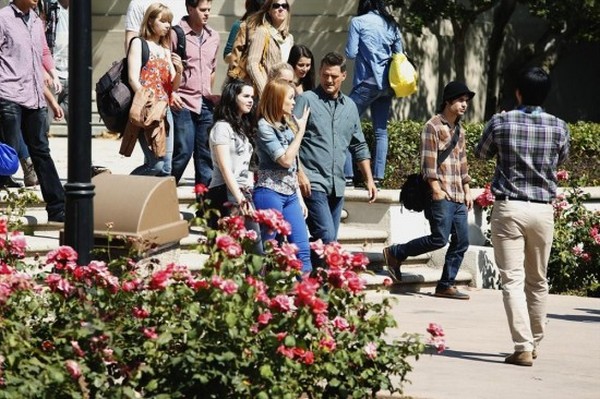 SWITCHED AT BIRTH returns to ABC Family tonight with a brand new episode called “Girl With Death Mask (She Plays Alone)” On tonight’s episode, John takes Bay and Daphne to Chicago to search for Bay’s cousin and give Daphne a college tour, but the trip does not go well. Elsewhere, Kathryn tries to play matchmaker for two individuals.

On the last episode the Kennish and Vasquez families rallied to support a loved one who was in critical condition. Amid the emotion, blame was placed, decisions had to be made and lives were forever changed. Did you watch last week’s episode? if you missed it we have a full and detailed recap, right here for you.

On tonight’s episode when John starts feeling a sense of built-up anxiety in Bay and Daphne, he suggests that a trip to Chicago to find Bay’s second cousin is a perfect opportunity for her to become more in touch with her roots and give Daphne a chance to tour prospective colleges. But the trip goes south when Daphne uses the opportunity to act out, and Bay discovers alarming news about Angelo’s family past.

Tune in to ABC Family at 8PM EST to watch “Girl With Death Mask (She Plays Alone).” We’ll also be recapping it all live for you right here. In the meantime head to our comments section and tell us your thoughts on season two so far and enjoy a sneak peek of tonight’s episode below.

John and Kathryn merely wanted to cheer up their daughters when they decided to turn Bay’s trip to Chicago into a family event. Because, although the girls are fighting it, life does go on and their two teenagers shouldn’t even know what wallowing in grief should feel like much less try to live it. So John is taking the girls to Chicago. That way Daphne can look at potential colleges and Bay can finally get to meet someone from Angelo’s side of the family in person.

Kathryn stayed behind. She wanted to be there for Regina though Regina is resisting all forms of assistance. The widow just wants to be left alone and instead she keeps on finding people she has to accommodate. Like Leo. He brought the baby for a visit and it had completely slipped Regina’s mind that he was coming. She’s been so caught up in wishing things were different with Angelo that she kind of forgotten everything else.

Thankfully, Kathryn was able to step in. And before Kathryn knew it she ended up being a great comfort to Leo if not Regina. Leo and his partner Victor split up a few months ago and they never got around to telling Angelo about it. One of the reasons Angelo chose to hand over the baby to them was the fact they had a two parent household, but when the couple broke up – Victor decided to check out. He’s been around for some time now and the baby thinks he’s on a business trip.

So hearing Leo go through all of this alone with a baby – Kathryn decided to play matchmaker. She called in Renzo. Her friend was a bit hesitant when she brought up a single dad though he changed his mind when Kathryn texted him a phone.

Renzo practically flew over to her house ready to cook a homemade meal. He wanted to look like a great homemaker in front of Leo!

Meanwhile in Chicago, Bay met her cousin and surprise they don’t get along. Her cousin thought she was another user like her father (looking for a handout) so he was mostly gruff with her. And that was before she broke a one of kind object inside of his house. Now to make it up to him – she has to come up with 700 dollars.

So she broke something. At least she hasn’t become a menace to society like Daphne. Daphne was supposed to be checking out schools and only that. But what really wanted to do was go for the full college experience. She talked her tour guide, Nelson, into using cocaine and then when that wasn’t enough to liven up their night – she tried to talk him into randomly throwing his things off of the roof. Luckily he found common sense when she threatened to throw his laptop (with all his papers still on it) next.

As for Bay, she learned some harsh truths. Like her father was user, but so are several other family members. Her cousin Sebastian nearly conned her out of the 700 dollars. He claimed the vase she broke was one of a kind when John actually found three other replica vases at the other man’s apartment.

John was so upset – he demanded his money back. He and Bay were simply going to leave but then Bay wanted to have a chance to speak her mind to her erstwhile cousin. He was in the middle of explaining that he only took the money as recompense for what Angelo owed him when she told him to lay off already. What use is being angry at a dead man? Especially at someone who just up and died one day because of a stupid aneurysm.

Though Sebastian did end up coming in handy. After Bay explained Angelo’s aneurysm – he then told her about her aunt Francesca. Her aunt died when she was 18 from an aneurysm. So now Bay knows that there’s a chance she also has aneurysm waiting to kill her.

Bay is sitting on this secret she doesn’t think she should share when she got an emergency call from Daphne. Daphne needed someone to come pick her up and didn’t have the heart to call John. She didn’t want him to see her like that.

But it’s while Bay was playing her sister’s hero that she learned why both Daphne and Regina have been acting out of character. They think Angelo’s accident was Regina’s fault because she caused Angelo to get so angry his aneurysm burst. Yet Bay has just learned that chances were always high for Angelo dying the way he did.

Which begs the question – is she going to tell anyone the truth or is going to sit on it despite knowing what it’s doing to her family? Daphne is so angry at her mother that she didn’t even care to hide what she really did on her trip from her mom. She very bluntly told Regina she got high.

And Bay returned home to see her baby sister. Leo and Renzo didn’t work out but Kathryn still told Leo that he had family to fall back on when he needs to.

As for the rest of the gang, Emmett and Tank finally met and it didn’t end well. A drunken Tank tried to assault the younger guy and when that failed Toby had to give him a ride home to sleep off the hangover. It was while he was there that Toby offered Tank a place in his apartment. He needs a new roommate and Tank is unhappy being around all of his old frat brothers. So they’ll be bunking together and hopefully Bay won’t become an issue.

I don’t see that working out – do you?